TV Quote of the Day (‘All in the Family,’ Anticipating Today’s Left-Right Divide)

Archie Bunker (played by Carroll O’Connor): “We got civil war, Maude! We got riots in the streets!”

Archie: “No! Because of Franklin Delano Roosevelt, the first creepin' socialist.”

Maude: “He brought the country back from the Depression.”

Archie: “And dumped us right into the middle of World War II.”

Maude: “Which he won as our commander in chief.”

Archie: “No! That's a lie! General MacArthur won that war. And Roosevelt fired him for it.”

Maude: “That was Truman.”

Archie: “That's a fact, Maude! Just like that other fact-- that he sold us out to Joe Stalin at Gibraltar.”

Maude: “They met at Yalta!”

Archie: “He sold us out there too!”—All in the Family, Season 2, Episode 12, “Cousin Maude’s Visit,” original air date Dec. 11, 1971, teleplay by Phil Mishkin, Michael Ross, and Bernard West, directed by John Rich
Posted by MikeT at 8:48 PM No comments: 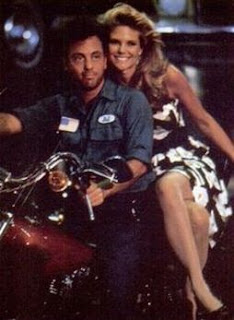 Released 35 years ago this month, at the midpoint (to date, anyway) of his recording career, BillyJoel’s An Innocent Man was more of a throwback than his other LPs. It didn’t riff off current events, as The Nylon Curtain’s “Allentown” had the prior year with its angry evocation of Rust Belt decline. It didn’t nod in the direction of the latest hip rock trend, as Glass Houses did toward New Wave.

Instead, it harked back to the songs of the Long Island singer-songwriter’s childhood and youth in the last Fifties and early Sixties. The music of that earlier era had given him a means of escape from a sometimes miserable boyhood as the son of a Jewish refugee from Nazi Germany and the product of a broken home.

All of that might have been enough for the “angry young man” of the Seventies to enjoy the success now coming his way. But here was another one: After his 10-year-old marriage had concluded, he had fallen in love again with a supermodel.

If a guy can’t smile in the company of Christie Brinkley, he is wretched indeed.

An Innocent Man quickly shot up the Billboard charts, climbing as high as #4, then stayed in the upper stratum for “The Longest Time.” Much of that was due to its mother lode of singles—six of which made the Top 40, with three of those entering the Top 10. (One song from four years before was a stylistic precursor to this collection: “Until the Night,” his 52nd Street evocation of Phil Spector’s “Wall of Sound.”)

It was natural that the tune that launched this hit parade was “Uptown Girl,” released a month after the album’s release. The video of this Four Seasons homage had to feature Joel, one of the least photogenic male stars of the rock era, but it also made full use of his beloved. It may have been the most preposterous entertainment pairing since Arthur Miller and Marilyn Monroe. (Actually, it was originally about Elle Macpherson, whom Joel had been dating just before this, but I guess he got his blond Sports Illustrated swimsuit supermodels mixed up.)

The video features pretty simple choreography to accommodate its leads (presumably, Ms. Brinkley had learned a few more steps 30 years later when she played Roxie Hart in the musical revival of Chicago) and the final sequence is pure fantasy. (When was the last time you recall a wealthy young lady climbing onto a motorcycle and wrapping her arms around a grease monkey?) But it was as irresistible as an ice-cream cone for all that.

I didn’t have cable TV till the end of the Eighties, so the only times I saw videos from that era was when I was in a hotel while vacationing. (I was in Orlando, gearing up for the holidays, when I saw Hall and Oates’ bug-eyed video for “Jingle Bell Rock.”) I only knew most of the songs from An Innocent Man in the old-fashioned way: through my ears, not my eyes. On that basis, it became my most heavily played Billy Joel LP of the Eighties.)

The long run of the album wound down in September 1984 with the release of its last single, “Leave a Tender Moment Alone.” This may be my favorite song of the album, chiefly because it featured a performance by perhaps the world’s best harmonica player at the time, Toots Thielemans of Belgium.

My favorite Billy Joel albums were ones he recorded early in his career: Piano Man (1973) and Turnstiles (1976). But producer Phil Ramone was able to capture Joel when he was loosest and happiest in his relationship with Christie, so An Innocent Man continues to yield pleasure all these years later.
Posted by MikeT at 8:29 PM No comments:

Photo of the Day: ‘Between You and Me,’ Chautauqua Institution, NY

This 2006 outdoor sculpture, “Between You and Me,” is by Jun Kaneko. It sits in the patio behind the famous Amphitheater in upstate New York at the Chautauqua Institution, which I visited last week and where I photographed this artwork.
Posted by MikeT at 9:56 PM No comments:

Quote of the Day (Virgil Thomson, on What Makes a Good Reviewer)

“Any reviewer who finds quickly the compact phrase…has clearly a talent for letters. If he has also a talent for judgment and no fear of using it, …then he is a good reviewer. A good reviewer does not have to be right; he has only to have a good mind and to speak it.”—Composer-critic Virgil Thomson (1896-1989), “A Free Critical Spirit,” New York Herald Tribune Books, Jan. 27, 1957, in Virgil Thomson: The State of Music and Other Writings, edited by Tim Page (2016)
Posted by MikeT at 9:37 PM No comments: 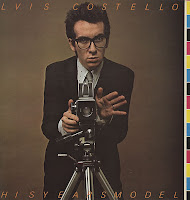