Tweet of the Day (Kimmy Monte, on Being ‘Down for the Count’) 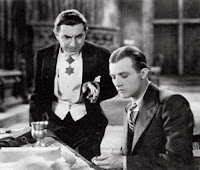 “I hate when boxing announcers say a boxer is ‘down for the count.’ I don't care that he loves Dracula; I just want to know who's winning.”— @KimmyMonte, tweet of June 9, 2014
Posted by MikeT at 3:14 AM No comments:

I took the image accompanying this post in late June, on a weekend visit to Pittsburgh. Although the vantage point from which this is taken is formally called West End-Elliott Overlook Park, locals have reduced that mouthful to West End Overlook.

Whatever you want to call it, this is the best spot to view where the Allegheny and Monongahela Rivers unite to form the Ohio River. The Native-Americans who inhabited this area first knew enough to take in the area from this bluff, and—now that the smoke that once belched from the city’s factories has gone—the view still can’t be beat.
Posted by MikeT at 9:22 PM No comments:

Quote of the Day (Pericles, on Heroes) 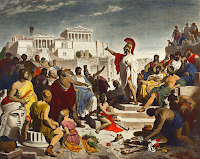 “Heroes have the whole earth for their tomb.”—Athenian statesman and general Pericles (494 BC-429 BC), “Pericles’ Funeral Oration,” in Thucydides (460 BC-395 BC), The History of the Peloponnesian War 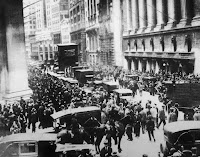 Oct. 29, 1929—Only five days after Wall Street trembled before righting itself, the New York Stock Exchange collapsed. The 16 million shares sold at declining prices not only made this “Black Tuesday” but also, for all intents and purposes, the start of the Great Depression.

In contrast to prior economic contractions, which lasted only a year or two, the Great Depression was far more protracted—not really ending until the arms ramp-up just before Pearl Harbor—and far more devastating, putting one-quarter of the American workforce on the unemployment line simultaneously.

It is well-known that, in effect, it thrust the federal government into a more interventionist position in relation to the economy. But not as many Americans realize that the Depression opened the country up to dangerous forces in a way never seen before. More Americans than ever before were willing to at least flirt with the idea of Communism, and in Louisiana, Huey Long made the entire state dance to his will.

Perhaps somewhat less surprising, my predominantly U.S. readership may not realize the impact of the Depression on other nations, starting with north of the border in Canada, a downturn chronicled by historian Pierre Berton in The Great Depression: 1929-1939. New Zealand, Australia and the United Kingdom also felt the blow. Worst of all was Germany, where voters in the already weak Weimar Republic looked increasingly toward, then embraced, the Nazi Party.

Critic Edmund Wilson called his account of the early stage of the downtown The American Earthquake. But if the noun in that title applies domestically, the case of Germany suggests that yet a stronger term might be required to depict the political damage in that country, where people sought simplistic solutions, then moved to wipe out the most vulnerable in their society.

I will not rehash what happened on Black Tuesday. If you want a vivid narrative of what happened that fateful day, you can turn to economist John Kenneth Galbraith’s The Great Crash: 1929.  What I really want to do is consider: could it happen again?

In one sense, it already has—in the 2007-2009 Global Financial Crisis (GFC). Much ink has been spilled about how Fed Chair Ben Bernanke and Treasury Secretary Hank Paulson, mindful of what happened in 1929, prevented a complete economic meltdown.

But what happened was bad enough. Consider some of the consequences of the crisis in the decade since, here and abroad:

*a whole cadre of the unemployed who, toward the start of the recession, became jobless for so long that they ended up out of the workforce for good;

*the hollowing out of the middle class;

*a resentment of government bank bailouts that, in part, sparked the Tea Party movement;

In the July/August issue of Foreign Affairs, Gillian Tett, an editor at The Financial Times, laid out the results of the “Faith-Based Finance” of a dozen years ago—how a mystical conviction about new technology, for instance, not only led to a round of Wall Street delusion, but could be repeaed:

“It would be foolish to imagine that the lessons of the crisis have been fully learned. Today, as before, there is still a tendency for investors to place too much faith in practices they do not understand. The only solution is to constantly question the basis of the credit that underpins credit markets. Just as there was in 2007, there is still a temptation to assume that culture does not matter in the era of sophisticated, digitally enabled finance.”

In a sense, Galbraith had anticipated this in 1954, when his highly acclaimed history of the Great Crash appeared. Although much of the book brimmed with ironic reflections on the comeuppance of Wall Street a quarter-century before, he became considerably more sober in the introduction to his 1961 edition:

"Someday, no one can tell when, there will be another speculative climax and crash. There is no chance that, as the market moves to the brink, those involved will see the nature of their illusion and so protect themselves. The mad can communicate their madness; they cannot perceive it and resolve to be sane. There is some protection so long as there are people who know, when they hear it said that history is being made in this market or that a new era has been opened, that the same history has been made and the same new eras have been opened many, many times before. This acts to arrest the spread of illusion. A better sense of history is what protects Europeans if not perfectly at least more adequately from speculative excrescence."
Posted by MikeT at 8:19 PM No comments: