Photo of the Day: The Wonder of the Rhododendron 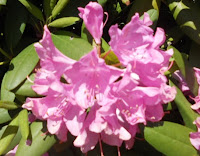 I saw this outside, of all things, a doctor’s office. I didn’t have a camera on me at the time, but the sheer size of this—and the nearness of the office to my home—convinced me to come back at another time to get this shot.

Incidentally, there are enough fans of the rhododendron that there’s even an American Rhododendron Society. Good to have something out there, encouraging simple beauty in this world…
Posted by MikeT at 11:38 PM No comments:

TV Quote of the Day (‘Cheers,’ With Carla in Her Sarcastic Glory) 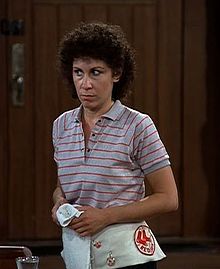 Dr. Frasier Crane (played by Kelsey Grammer): “I've been taking stock of myself.”

Photo of the Day: Hard to Believe This Was Only a Month Ago…

With the temperatures and humidity climbing to uncomfortable levels even now, I’ve already turned up the AC. Just to think: only a month ago this coming Sunday, I was strolling the grounds of the Cloisters in the Washington Heights section of New York on a lovely spring day. Now, this woman I caught on camera would be decidedly overdressed with that warmup suit, and that dog would be lapping up water any which way he could.
Posted by MikeT at 10:02 PM No comments:

Flashback, May 1593: The (Christopher) Marlowe Mystery 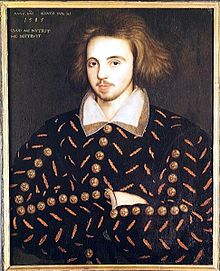 Following an accusation of heresy, likely extracted under torture, by friend Thomas Kyd, playwright Christopher Marlowe was arrested on May 18, 1593. Almost as quickly, he was released. But Marlowe’s life, marked by mystery and controversy at every turn, was bound to end the same way. Within two weeks after his arrest, the masterful Elizabethan playwright-poet—not to mention spy, counterfeiter, infidel, and homosexual—was stabbed to death, under circumstances almost certainly covered up by the government.

A prior post of mine discussed the death—and, in necessarily brief form, the life—of Marlowe (1564-1593). But the environment surrounding his demise remains so complex that only one post hardly does justice to it.

Just as important, a new book—deeply accomplished in style, if not conclusions—has brought renewed attention to the case. I don’t buy a major underlying premise of Ros Barber’s The Marlowe Papers—i.e., that the playwright did not die, but was whisked away by British intelligence, carving out a new identity for himself as William Shakespeare. But Barber does a sterling job of evoking a truly dark time, and her book, like Vikram Seth’s Golden Gate, is one of the few examples I can think of where the narrative power of a novel is combined with evocative verse.

The glorification of Queen Elizabeth I by courtiers in her own time and historians bent on an Anglocentric view of the past masks a grave reality that the Marlowe case highlights: her subjects lived in a police state. Fears of a takeover of the nation by the Catholic monarch of Spain, Philip II, created an atmosphere of paranoia, as well as the rise of a massive intelligence network monitored by Sir Francis Walsingham. Control of the theater community, perhaps the major entertainment venue of the time, was a priority.

Go through the plays not only of Shakespeare, Marlowe and Kyd but also of John Ford, John Webster and Thomas Middleton, and the same pattern emerges: not one of these dramas of deceit and violence was set in Elizabethan England.

More often than not, to be absolutely safe, the plots occurred on the Continent, in places such as Venice, Spain or Greece—areas where most Elizabethans had never seen, and could know only by reputation.
When a play was set on English soil, it was best to set it way off in the past—or use a metaphor that, in the context of a play, could be shrugged off as expressing no more than it appeared to do on the surface. Thus, “a rose by another name would smell as sweet,” except if the colors referred to the rival houses of Lancaster and York in the War of the Roses.

Clare Asquith’s Shadowplay is instructive in this regard. I don’t accept all the ramifications of her contention that Shakespeare was a secret Catholic, but she operates from an indisputable premise: anyone writing plays had to communicate via coded language. At very least, playwrights might be interrogated by government agents, then induced to change some aspect of a play, as when Shakespeare altered the name Sir John Oldcastle to Sir John Falstaff to avoid offending a descendant of the  knight.

Thomas Kyd’s treatment was worse than Shakespeare’s. Being the author of The Spanish Tragedy, one of the most performed plays of the Elizabethan Age, as well as in the employ of a prominent English earl, did him no good with Walsingham’s men.

Somehow, his name became associated with an offensive, anti-immigrant sign posted on the door of an English church. The authorities raided Kyd’s room, where they discovered a number of blasphemous papers.

After a week of interrogation, a prolonged period in which torture was likely employed, Kyd claimed that the materials were not his but Marlowe’s. Marlowe, released on bail following his arrest, was still required by the Privy Council to report daily to the Palace of Westminster. He was due to appear before the Star Chamber Court, where a fate similar to Kyd’s (at best, shunning by his patron; at worst, judicial murder) might await him.

Within a few years after his death, rumors (conveniently allowed by the government) circulated that Marlowe had died in a barroom brawl. It wasn’t until the 20th century that a scholar, performing like a literary Philip Marlowe, uncovered some salient facts about the death that contradicted this version.

First, the death had not occurred in the bar but in a room. Second, the room was in the house of Eleanor Bull, a bailiff’s widow with court connections. Third, Mrs.Bull’s house was no ordinary lodging establishment, but one with connections to Walsingham’s spy network. Fourth, the four men in the room that night all knew each other; Marlowe; the man who stabbed him in an alleged quarrel over the “reckoning” for the food and drink that day, Ingram Frizer; and two others who served as eyewitnesses at the subsequent inquest.

In 20th-century private-eye parlance, Christopher Marlowe made for an ideal fall guy. He had already been involved in a street brawl in which his friend, Thomas Watson, had come to his aid. Watson had ended up killing the man with whom Marlowe was fighting, an innkeeper’s son named William Bradley.

Whatever services Marlowe had performed for Her Majesty, the last thing the spy network could afford was someone indiscreet. It would be better for Marlowe to be removed from the scene, and even better yet if it could be made to seem a result of his own doing. Thus, the word went out that Marlowe had died in an argument over the “reckoning,” or bill, at the Widow Bull’s. In fact, all the circumstances now known make it quite possible that he was "terminated" in a government safe house by agents known to him and to Her Majesty's spymaster.

Frizer’s subsequent argument—that he had acted in self-defense—was readily accepted, all the more so as it came from a personal employee of Walsingham’s who actually lived on his estate. Frizer was pardoned within a month—extraordinarily fast for such a case.

The life of Shakespeare has struck many as being extraordinarily quiet and bourgeois. The example of his principal stage rival, Marlowe—dead before the age of 30—would have served as sufficient warning about the dangers of a reckless life. In the typical coded language of thetTime, The Bard alluded to his fallen contemporary in As You Like It:  “When a man's verses cannot be understood, nor a man's good wit seconded with the forward child understanding, it strikes a man more dead than a great reckoning in a little room.”
Posted by MikeT at 6:17 PM No comments:

Quote of the Day (Russ Feingold, on Both Parties ‘In the Tank’) 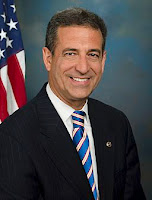 “The truth is that because both parties are in the tank with these huge (campaign) contributions, no matter who wins our public policy is being bought off after the election. It has even happened literally in the halls of Congress. That kind of thing happened in the 1990s, before John McCain and I were able to stop party soft money. We had votes of, for example, 85–15, 90–10, where both parties were bought off on things like trade agreements, telecommunications, and, of course, the outrageous repeal of the Glass-Steagall Act, which had more to do with our economic collapse than anything else. It’s happening again, maybe worse than before. To me, you have to broaden the frame to see that in the long run, this will be crushing to our democracy.”—Russell Feingold, former U.S. Senator from Wisconsin, interviewed by Francis Fukuyuma, “A Senator's Lament,” The American Interest, March/April 2013

(Photograph of Russell Feingold taken August 2006, while he was still a member of the Senate.)
Posted by MikeT at 2:58 AM No comments: