Photo of the Day: Pittsburgh’s ‘Pops’ 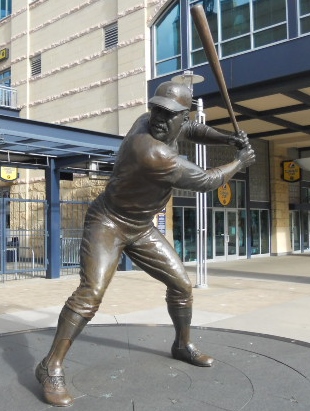 Willie Stargell, inducted into the Baseball Hall of Fame 25 years ago today, died of complications from a stroke on the day this statue was unveiled back in 2001. How sad: the cheerful patriarch of the Pittsburgh Pirate clubhouse might have smiled at this 12-ft. representation, made up of seven oversize, welded-together pieces: arms, legs, torso, head and—oh, brother—that bat, a 35-ounce “Big Stick” special that, when whipped around, became a weapon of force and mayhem that shriveled the hearts of opposing pitchers.

Visiting PNC Park earlier this month, I snapped this statue of the slugger outside the entrance to left field, his position when the Bucs occupied Forbes Field and Three Rivers Stadium. The head-on shots I took caught Stargell as a larger-than-life bronze presence, but the light at that time of the day meant that his expression—or any identifiable facial feature—was invisible.

While that problem was solved by the angle from which I took this image, I would have preferred photographing him from behind, where you can see the number 8 in relief on the back of his uniform, his hair curling out from his cap, and the muscles on his tendons stretching and bulging. In the moment you register this last image, you know instantly why Stargell hit 475 home runs, and why some of his round-trippers not only cleared the fences but were tape-measure jobs that were the longest ever hit in those stadiums.

You’d never know it from this work from local sculptor Susan Wagner, but the intimidating lefthanded batter here, a vision of torqued terror, felt the deepest of passions for his adopted city, as evidenced by his Hall of Fame induction speech (an addressed delivered extemporaneously when Stargell realized his carefully prepared one didn’t convey what he wanted to say):

“My greatest honor was the moment that I arrived in Pittsburgh and put in what I thought was the most grandest exhibition of how a city can open its arms to any one individual. I came in through the Fort Pitt tunnels and it was most beautiful thing that I had ever observed. Pittsburgh didn’t know an awful lot about me but I certainly knew an awful lot about Pittsburgh. I knew there was a tradition, a very proud tradition. It wasn’t a fancy place because the people are real. If you went out and did what was expected of you, you could win the admiration of that city, and all it is is hard work doing what you had to do and helping a fellow man. I learned an awful lot in Pittsburgh. I learned some things that probably no learning institution that I could have attended that I could have learned anywhere else but the city of Pittsburgh.”

The city fully returned the embrace of “Pops” for giving it six National League East Division titles, two National League championships and two World Series in 1971 and 1979.
Posted by MikeT at 7:28 PM No comments:

Quote of the Day (Molly Haskell, on the Internet as ‘Democracy’s Revenge’)

“The Internet is democracy’s revenge on democracy.”—Film critic Molly Haskell quoted in Armond White, “Do Movie Critics Matter?” First Things, April 2010
Posted by MikeT at 2:36 AM No comments:

Photo of the Day: The Point of It All 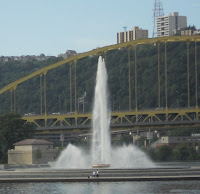 This 100-foot fountain, which I snapped several weeks ago, gives you an idea why the Web site for a CBS local station listed Point State Park (from which I took the picture) among the “Best Spots for a Picnic in Pittsburgh.” (You'll also see, from the heights in the background, why the city is so hilly.) The “point” (or, as the locals refer to it, “The Point” with a capital “P”) is actually the confluence of the Allegheny, Monongahela and Ohio Rivers.

Years ago, that natural intersection marked Pittsburgh as a potential center for industry. Today, it’s made the former "Smoky City" something that residents (and tourists such as myself) can enjoy with lawns, park benches, trail systems, bike access, outdoor concerts and—yes—picnics.
Posted by MikeT at 10:15 PM No comments:

Quote of the Day (Emily Bronte, on a ‘Good Heart’) 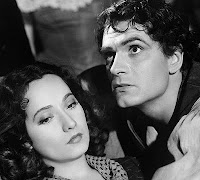 “A good heart will help you to a bonny face, my lad ... and a bad one will turn the bonniest into something worse than ugly."-- Emily Bronte, Wuthering Heights (1848)

Emily Bronte, part of an extraordinary trio of literary sisters (Charlotte and Anne, of course, were the others), was born on this date in 1818. Her masterpiece, Wuthering Heights, is even more extraordinary on the printed page than the celebrated 1939 film starring Laurence Olivier and Merle Oberon (pictured here), as it traces how love lasts, even in a form bent, twisted, and ravaged by class differences and revenge, across generations. One of the great losses ever suffered by literature was her demise so soon after this single, albeit enduring, novel.
Posted by MikeT at 2:45 AM No comments:

July 29, 1978—Only four days after “resigning” as manager of the New York Yankees, Billy Martin, wearing his familiar Number 1, waved happily to 46,000 fans at Old Timers Game, basking in his surprise introduction as the team’s skipper for the 1980 season. It was the most flabbergasting event of his tempestuous decade-and-half relationship with principal owner George Steinbrenner—but by no means his last.

The ouster of Martin had been a year and a half in the making, after the Yankee skipper began to chafe at the notion of co-existing in the same dugout as recently signed slugger Reggie Jackson. Tensions exploded as the Bronx Bombers lost ground to the archrival Boston Red Sox, Jackson ignored Martin’s signs while batting, and the manager, after several drinks at an airport bar, told sportswriters, "The two of them deserve each other - one's a born liar [Jackson], the other's convicted [Steinbrenner]."

At the height of the Martin-Steinbrenner mess, a New York sportswriter speculated that the manager had failed to keep The Boss’ First Commandment: I am the Lord Thy Owner; thou shalt not have any strange owners before me. The object of the baseball deity’s wrath was that “convicted” line, a thinly veiled reference to Steinbrenner’s short suspension from baseball because of illegal contributions to Richard Nixon’s reelection campaign.

The price of that offense for Martin: banishment from the team and the job that meant everything to him.
("When you start talking about firing him as manager of the New York Yankees, you might as well stab him with a knife," remembered reliever Sparky Lyle.) His replacement: the far more mild-mannered Bob Lemon, an act that Steinbrenner had been threatening for awhile.

Well, that, clearly, explains why Steinbrenner forced Martin out. But why did he want to bring him back? Part of it may have been a desire to placate irate fans, but three other elements in his complex character might have played a role.

1) Steinbrenner's desire to look magnanimous—and, on occasion, to be magnanimous. Had Steinbrenner not made his dramatic announcement, the highlight of the day would have been Roger Maris’ first appearance in an Old Timers’ Game—an event he had shunned for years because of his shameful mistreatment by the team’s prior management in the Sixties. Steinbrenner’s assiduous wooing back into the Yankee fold spoke well of the owner’s better instincts.

2) Steinbrenner’s desire for vindication. Meeting with Martin two days after the firing, Steinbrenner insisted that, to get his job back in 1980, Billy had to admit to something he had previously, adamantly denied: that he had even made the statement that got him fired. (Another point that Steinbrenner requested—that Martin seek help for his drinking—somehow fell by the wayside. Martin died in an alcohol-related auto accident 11 years later.)

3) Steinbrenner’s flair for the dramatic. After all, Martin had been brought back originally to the Yankees on Old Timers’ Day in 1975. Steinbrenner simply hated to have anything else taking the focus away from his team. Martin, whatever his faults, would put fans in the seats, for sure.

4) Steinbrenner's impulsiveness. The Yankees' principal owner couldn't abide waiting, whether for a World Series, first place in a division or simply an advancement on prior standings. He wasn't only prepared to fire someone, but to call the person back.Years later, he revealed to writer Marty Noble that, if the Yankees hadn't begun to respond quickly to Lemon, he would, instead of sticking to the master plan--kicking Lemon upstairs to GM in 1980, as Martin took over--have rehired Martin for the final weeks of 1978. (He acknowledged that a similar thought ran through his mind in 1996, the first year of Joe Torre's run with the team, when he might have sounded out just-fired Buck Showalter.)

Nobody noticed it in the tumult surrounding the Yankees, but the balance of power between the Bosox and Yankees was beginning to shift. The Bombers found themselves down by 14 games on July 19, but already the Red Sox had, quietly and insidiously, begun to give away their huge lead because of a four-game losing streak that ended the same day as the Yankee announcement. In August, as what turned out to be an 88-day New York newspaper strike took hold, the Yankees’ Lemon began the ritual of filling out the lineup card and simply letting his talented team play. A pennant race for the ages was about to begin, one that Yankee fans would celebrate--and Red Sox fans abominate--for years to come.
Posted by MikeT at 10:33 PM No comments: