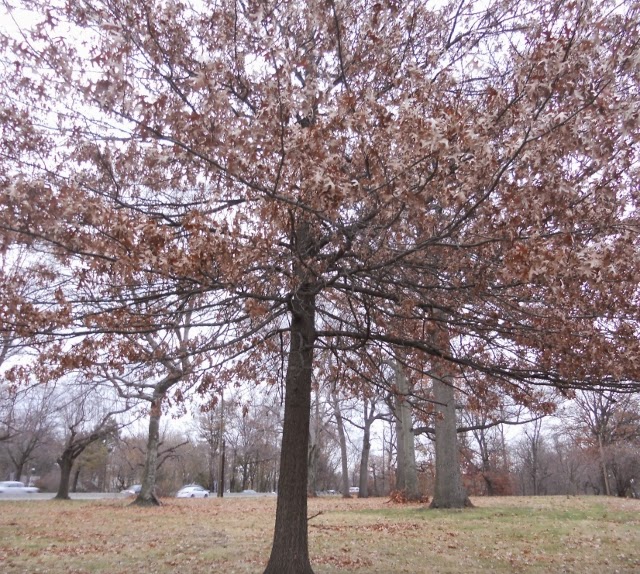 Like countless other motorists in Bergen County, N.J., I have passed by a small tract of land on Route 4 eastbound countless times. Yet it was only this afternoon that--attracted, oddly enough, by the brown, decaying leaves on its large trees--I stopped briefly to look around and photograph Gaylord Park in Teaneck. It is a slight—but, undoubtedly, much appreciated—buffer between residents and Route 4, one of the most insane traffic arteries in Northern New Jersey.
Posted by MikeT at 9:49 PM No comments:

Quote of the Day (Rev. M. Craig Barnes, on Why We Should ‘Savor the Grace' in Life) 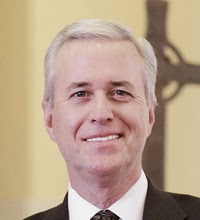 “Have you ever bent over a baby and made a fool of yourself to get a smile? Have you ever found your spouse across the room at a party and winked? Have you ever held an old, wrinkled hand and listened to the stories? Have you ever read a newspaper story that made you tear up and want to pray? Have you ever been so lost in conversation that you realize you closed the restaurant down?  If you answered no, chances are you are already dead. Savor the grace of this life.”—Rev. M. Craig Barnes, president of Princeton Theological Seminary, quoted in Mary Lee Talbot, “Morning Worship: ‘Savor the Grace in Life,’” The Chautauquan Daily, August 6, 2014
Posted by MikeT at 5:30 AM No comments:

Photo of the Day: Cathedral of St. John the Baptist, Savannah GA 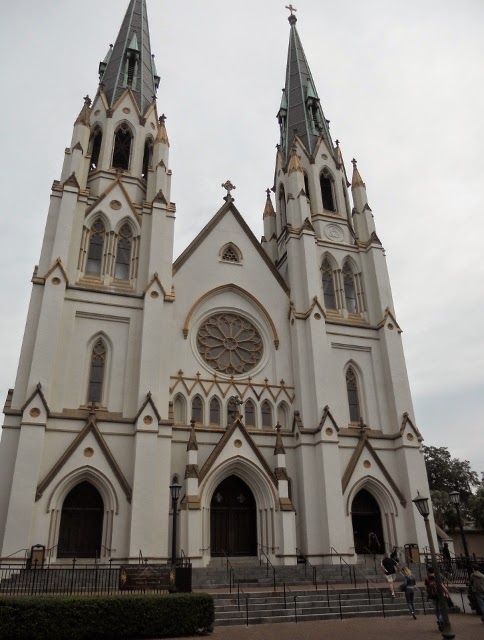 I took this photograph while on vacation two weeks ago in Savannah. The memory of the first time I saw the Cathedral of St.John the Baptist, back in late October 1999, had lingered with me, and I wanted to make sure during my one-day trip back to the city that I took a shot of this cathedral built in the French Gothic style.

Luckily, the city trolley tour I took had a stop at East Harris Street, so I was able to snap this shot as well as several others inside, which I’ll post at a later time.

Far more people than I have been captivated by this building’s beauty. Today, an estimated 150,000 people visit this religious institution annually. Earlier this year, readers of TripAdvisor voted the cathedral one of their “Top 10 U.S. Landmarks” (a list that also includes, among other sites, Gettysburg, the Lincoln Memorial, and the USS Arizona Memorial in Hawaii).

Two years after this building was completed in 1896, a fire destroyed all but the outside walls and the two spires. Rebuilding began immediately, but it was not until 1912 that the redecoration of the interior was finished.

Speaking of the spires: Cathedral parishioners’ quarterly newsletter is called “The Twin Spires.” They truly represent an imposing landmark in a city filled with them.
Posted by MikeT at 11:37 PM No comments:

Quote of the Day (Jimmy Fallon, on Starbucks’ New Drink) 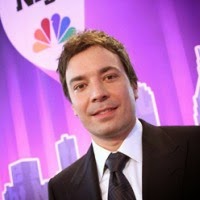 “Starbucks is coming out with a Chestnut Praline Latte. Sounds less like a drink and more like a stripper giving her full name.” —Jimmy Fallon, October 28, 2014 tweet
Posted by MikeT at 8:04 AM No comments: 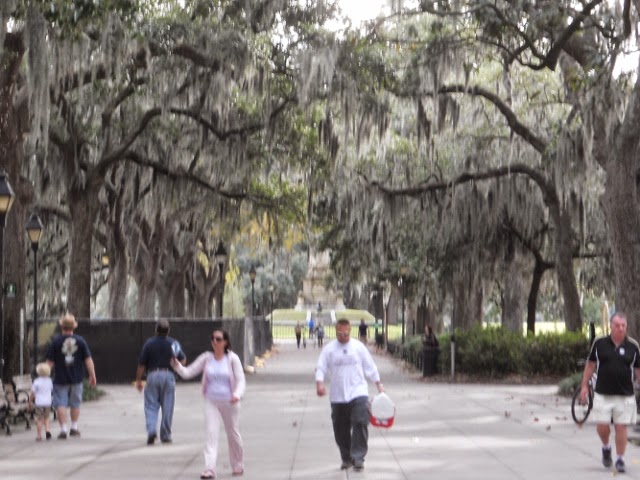 Yes, I know I had a post yesterday on this beautiful urban park. But the splendors of Forsyth Park in Savannah are multitudinous.

The most obvious ones, as seen in this other photo I took two weeks ago on a day trip to that coastal city, are the trees with Spanish moss that form a canopy over walkers; the people from all walks of life who throng this long walk leading to the  park’s equally stunning fountain; and the faith that the park’s early planners had, in the mid-19th century, that, despite the weaknesses of man in civic society (including their own lack of recognition of the evils of slavery), the residents of the city would still find a way to preserve the best of themselves, in harmony with nature.

(I have another, personal reason for liking this picture: the presence of a relative who shall remain nameless!)

But I know you can find plenty more wonders of your own, besides these, in this picture and this park.
Posted by MikeT at 10:00 PM No comments:

Quote of the Day (Marcel Proust, on a ‘Woman Whom We Need’)

“A woman whom we need and who makes us suffer elicits from us a whole gamut of feelings far more profound and vital than a man of genius who interests us.” — French novelist Marcel Proust (1871-1922), Time Regained, Vol. VI of In Search of Lost Time

This would deeply disappoint Sheldon Cooper of The Big Bang Theory, for it means that his best friend, Leonard, experiences far more in the presence of Penny than himself. Not that the “man of genius” didn’t surmise this already…
Posted by MikeT at 6:42 AM No comments: