Song Lyric of the Day (Talking Heads, Anticipating Life During a Polar Vortex) 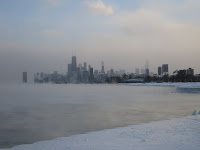 “This ain't no party, this ain't no disco,
This ain't no fooling around.”— David Byrne, Chris Frantz, Jerry Harrison, and Tina Weymouth, “Life During Wartime,” from the Talking Heads’ LP Fear of Music (1979)

(Chicago from Diversey Harbor during 2014 Polar Vortex Chiberia, Jan. 6, 2014, taken by Edward Stojakovic from Portland, OR)
Posted by MikeT at 6:42 PM No comments:

“Women have a harder time than men establishing their credibility as candidates, because our traditional images of political leadership are male (along with our traditional images of trial lawyers and neurosurgeons)….Men are presumed to be competent; women must prove they're competent…. Voters want candidates who will fight for them, but women who present themselves as fighters are likely to be considered strident, at best, or bitchy…. In addition to these general credibility problems (which seem to be lessening), women candidates also cite particular, familiar manifestations of bias. They commonly complain that the press pays too much attention to a woman's appearance. Josie Heath, a 1990 and 1992 Democratic senatorial candidate from Colorado, notes that she can describe her wardrobe by reading her campaign clips.”— Wendy Kaminer, “Crashing the Locker Room,” The Atlantic Monthly, July 1992

“It is harder to be a public woman in America than a public man, and harder to be a female candidate. The challenges they face are practical, emotional, even existential. Practical: No one gets a lot of lot of sleep on the trail, but a woman has to get up an hour earlier for makeup, hair, to choose what to wear and get it together. If she doesn't, they'll say she looks bad. Emotional: We are a crueler country every year, thanks in part to the internet, where women are the objects not of more hate but of sicker hate—brute, sexual, anonymous. Existential: people often experience what a woman says and what a man says differently. They just do.”—Peggy Noonan, “The Odd Way We Announce for President Now,” The Wall Street Journal, Jan. 19-20, 2019

With her symbolically chosen announcement on Martin Luther King Jr.’s birthday, U.S. Senator Kamala Harris (D-Calif.) (pictured) joins three other female candidates—Elizabeth Warren, Kristen Gillibrand and Tulsi Gabbard—in the race for the Democratic nomination for President. Wouldn’t it be something if one of the quartet, nearly a century after women gained the right to vote, finally broke through the biggest glass ceiling of all?

I know what you’re thinking: More than a quarter-century after the prematurely proclaimed “Year of the Woman” of 1992, women are set to make their presence felt on Capitol Hill in unprecedented numbers. Following the 2018 midterm elections, more than 100 women will, for the first time, serve in the House of Representatives, with 131 in both chambers of Congress. The incoming class is sizable enough to have rated a recent 16-page special supplement in The New York Times.

But female politicians at the national level still unconscionably lag badly behind their male counterparts: Not simply in the lack of progress relative to other countries that have had female heads of government (notably, Great Britain, Israel, and Germany), but also as a percentage of seats held in the House of Representatives (only about a fourth).

More dismaying, I couldn’t help noting in coming across the articles by Wendy Kaminer and Peggy Noonan, is the hard-core persistence of image problems afflicting female candidates. It’s a point in common, over the span of 27 years, between Kaminer, a liberal lawyer (even a longtime ACLU member) and critic, and Noonan, a conservative speechwriter for Ronald Reagan and George H.W. Bush.

James Carville once famously defined politics as “show business for ugly people,” but women seem oddly exempt from that in the current political environment. They are not allowed to be physically flawed at all.

It’s as if the prejudices these men recite remain obdurate, even encrusted, even as times and people have changed—or are supposed to have done so, at least.

Just how ingrained these instincts might be can be seen in the 2016 Presidential election. In the run-up to the bitter and baffling finale between Hillary Clinton and Donald Trump, a close relative of mine said that Mrs. Clinton, unlike Trump, looked tired. The same could not be said for her rival, my relative said.

This type of observation might be forgotten now, with the former Democratic nominee having made enough appearances in the midterms with her husband that many in her party heartily wished that the couple would just go away.
But in 2016, it was very much a live issue, with Trump suggesting that Mrs. Clinton had “low energy” and lacked “the mental and physical stamina to take on ISIS, and all the many adversaries we face.”

In vain did I argue with my relative that Trump may have looked so fresh because he didn’t bother to stay up reading position papers and that he traveled on his own jet with every conceivable creature comfort. In contrast, Mrs. Clinton had maintained a punishing schedule as Secretary of State.

But my relative’s speculations coincided, unhappily, with Mrs. Clinton’s appearance at a 9/11 memorial commemoration in 2016 in which she had to be walked away after feeling sick. The subsequent pneumonia diagnosis seemed to confirm to those already not well-disposed toward her not only that, as Trump charged, she had “low energy,” but even to the more gullible members of the electorate (the kind that read The National Enquirer and Alex Jones) that she had an advanced case of Parkinson’s Disease. (Funny how all that talk has dissipated nearly 2½ years later, isn’t it?)

Coming as it did after such slash-and-burn tactics, Mrs. Clinton’s loss that fall was bound to gall her female supporters anyway. But the fact that she lost to someone who, right on camera, admitted to groping women—i.e., sexual assault—also seems to have fed much of the fury of the #MeToo movement.

Rather than “draining the swamp” in Washington, as promised during the campaign, President Trump had actually only given greater prominence to one of the most reptilian creatures in our nation’s capital: The Washington Male. The late political commentator, war correspondent, and editor Michael Kelly memorably defined the species in a December 1996 column for The New Republic:

His pep-rallies out in the American Heartland to the contrary, the President is far more acclimated to Washington than he has ever let on. In his unending humorlessness, he has found common cause with the Washington Male.

More important, because he is constitutionally incapable of taking a joke, he perceives threats everywhere and will take action against the slightest threat to his authority—a bellicose personality in permanent danger of creating a crisis, not to mention a leader ready to crush all opposition to those who regard him as a grave threat to the Constitution.

Yet his base ignores all of this, just as they blithely ignore the very things in Donald Trump—low energy, visible signs of aging—for which they attack female politicians, usually on social media.

One of the women subject to such carping over the last several years has been Speaker of the House Nancy Pelosi. Not content to label her a “San Francisco Democrat” of leftist orientation, conservatives have also made the 78-year-old politico a convenient target for ageism.
I can’t say I’m a fan of many of her policies, but I definitely have to tip my hat to the lady now. This past week, she managed to do what 16 rivals in the GOP primaries (15 of them male), Sen. Mitch McConnell, and Ms. Pelosi’s predecessor as Speaker, Paul Ryan, never managed to do: Bring the tantrum-throwing Twitterer in Chief to heel.

“Women candidates have stories to tell different from men's,” writes Ms. Kaminer, “because, like it or not, they represent to voters different visions of authority and different values.” The temptation, after the results of last fall, is to believe that, for an electorate desperate to wipe the slate of American politics clean, that may be women candidates’ greatest advantage.
But Ms. Pelosi presents a more realistic possibility. Along with the instinct that any Speaker must have—a sense of how many votes are on hand for a bill—Ms. Pelosi demonstrated, in the recent protracted government shutdown, a keen ability to play upon the tender male ego—in this case, a male ego who couldn’t abide the idea of not using Congress as a backdrop for his State of the Union message. Ms. Pelosi attributed Trump’s forcing of the government shutdown over the border wall with Mexico—and his stubborn, even childish resistance to a compromise on it—to a “manhood thing.”

As of now, Trump’s “manhood” is undergoing what Seinfeld’s hapless George Costanza called “shrinkage.” Female candidates, please take note: Playing upon such anxieties among male opponents may be your best road map to success.
Posted by MikeT at 9:11 PM No comments:

Quote of the Day (Susan Orlean, on What She Learned During Super Bowl Week, 24 Years Ago) 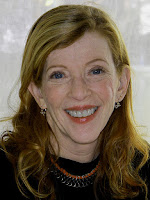 “I learned that the Super Bowl and the week of revelry leading up to it feels exactly like prom week—if you had happened to go to a high school with seventy-four thousand in the graduating class and your prom had been televised to seven hundred and fifty million people worldwide and your parents had been liberal about your curfew and you had accessorized your prom outfit by wearing on your head a piece of polyurethane foam shaped like a thunderbolt (if you were a Chargers fan), or a miner's pickax (if you were for the 49ers). The only difference--which in the case of most Super Bowls turns out to be a minor one—is that most proms don't feature a football game.”— Susan Orlean, “Super-Duper,” The New Yorker, Feb. 13, 1995, collected in her My Kind of Place: Travel Stories from a Woman Who's Been Everywhere (2004)

Quote of the Day (Margaret Atwood, on the Survival of the Book) 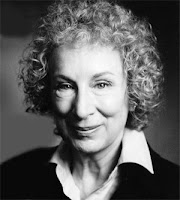 “Every prediction—radio would kill books, it didn’t; television would kill movies, it didn’t; e-reading will kill books, it hasn’t—these predictions have all been wrong. You’re never going to kill storytelling, because it’s built into the human plan. We come with it.”—Canadian novelist Margaret Atwood quoted in Lily Rothman, “Margaret Atwood on Serial Fiction and the Future of the Book,” Time, Oct. 8, 2012
Posted by MikeT at 7:29 PM No comments:

Quote of the Day (David Sedaris, on a Past January Train Ride)

“[T]here was a smoking car on the Amtrak I took from Raleigh to Chicago in 1984, but seven years later it was gone. By then if you wanted a cigarette your only option was to head for the bar. It sounds all right in passing, romantic even—'the bar on the Lake Shore Limited’—but in fact it was rather depressing. Too bright, too loud, and full of alcoholics who commandeered the seats immediately after boarding and remained there, marinating like cheap kebabs, until they reached their destinations. At first, their voices might strike you as jolly: the warm tones of strangers becoming friends. Then the drinkers would get sloppy and repetitive, settling, finally, on that cross-eyed mush that passes for alcoholic sincerity.” —Comic essayist David Sedaris, on a January 1991 train ride, in “Reflections:Guy Walks into a Bar,” The New Yorker, Apr. 20, 2009
Posted by MikeT at 7:44 PM No comments: