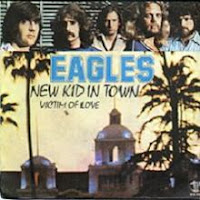 Forty years ago this week, The Eagles’ first single from the Hotel California LP, “New Kid in Town,” reached Number 1 on the U.S. singles chart. Perhaps anticipating a year when rock-and-roll music moguls would increasingly fixate on mega-selling releases, the group took a mordant view of flavors-of-the-month, both among the rock-buying public and faithless lovers. In the process, the single helped lift this ambitious album to a creative and commercial peak for this avatar of the Southern California sound of the Seventies.

Perhaps we should say at this point what this song is not about.  It does not deal with the anxieties of a sensitive teenager arriving at a new high school, a la James Dean in Rebel Without a Cause.

A better metaphor—but really only a starting point of the song—could be something out of The Eagles’ concept album from a few years before, Desperado: a young gun whose reputation precedes him, who ends up quickly exhausted from looking over his shoulder at the bar awaiting the next person to seize his mantle.

It’s easy to translate that to the rock ‘n’ roll environment in general and the Eagles’ situation in particular in 1976, when the album was recorded and released. One album after another had yielded hits—Eagles, Desperado, On the Border, and One of These Nights—but none seemed to satisfy the critics. In contrast, a new, raw force had appeared on the East Coast: Bruce Springsteen.

Though the group was quick to disclaim any animus toward “The Boss” from Asbury Park, N.J., they admitted to becoming jaded about what another musician on the Southern California scene, Joni Mitchell, called “the star-making machinery.” This was the year of the blockbuster in music: not just Hotel California, but Fleetwood Mac's Rumours and the Saturday Night Fever soundtrack.

“It’s about the fleeting, fickle nature of love and romance,” the group’s drummer and co-songwriter, Don Henley, remembered about "New Kid in Town" in liner notes for the collection, The Very Best of the Eagles. “It’s also about the fleeting nature of fame, especially in the music business. We were basically saying, ‘Look, we know we’re red hot right now but we also know that somebody’s going to come along and replace us — both in music and in love.”

Especially because of the addition of guitarist Joe Walsh, The Eagles on Hotel California edged away from the more country-rock sound of their prior LPs, particularly with “Life in the Fast Lane,” “Victim of Love,” and the phantasmagoric title tune. But “New Kid in Town,” with its softer instrumentation and melancholy lyrics by Henley, Glenn Frey and J.D. Souther, harks back to their earlier work without being out of place in a collection revolving around personal, creative, and sociopolitical loss of innocence.

“New Kid in Town” won the Grammy for Best Arrangement for Voices. But, in listening to the piece over the years, I could understand those critics who felt that, for all their admitted skill in the studio, The Eagles’ sound had gotten pureed somewhere on the road to perfection.

In fact, the full power of the song didn’t hit me until I heard the version on the 2011 CD Natural History by Frey’s friend and frequent collaborator, J.D. Souther. Roy Orbison may have been the most powerful vocal influence on Souther, and that makes all the difference in comparing his and Frey’s lead vocal on the hit single. Souther’s was a more expressive instrument than his late friend’s, bringing out the underlying message of the song: that nothing lasts forever—not fame, not fortune, not creative fulfillment, not even love itself.
Posted by MikeT at 7:46 PM No comments:

Song Lyric of the Day (Paul Simon, on When to “Let the Music Wash Your Soul’)

“Take your burdens to the Mardi Gras
Let the music wash your soul.”— Paul Simon, “Take Me to the Mardi Gras,” from his There Goes Rhymin' Simon LP (1973)
Posted by MikeT at 4:52 PM No comments:

Quote of the Day (Chairman Mao, on Prior ‘Enemies of the People’) 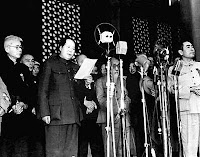 “During the War of Liberation, the U.S. imperialists and their running dogs -- the bureaucrat-capitalists, the landlords and the Kuomintang reactionaries who represented these two classes -- were the enemies of the people, while the other classes, strata and social groups, which opposed them, all came within the category of the people. At the present stage, the period of building socialism, the classes, strata and social groups which favour, support and work for the cause of socialist construction all come within the category of the people, while the social forces and groups which resist the socialist revolution and are hostile to or sabotage socialist construction are all enemies of the people.”— Mao Tse-tung (1893-1976), Chairman of the Chinese Communist Party, “On the Correct Handling of Contradictions Among the People,” Speech at the Eleventh Session (Enlarged) of the Supreme State Conference, Feb. 27, 1957

You know, I thought I had heard that phrase “enemies of the people” somewhere, before it was used in a recent speech  in which Donald Trump lambasted the media. It turns out that Chairman Mao had employed it. He really hated the idea of contradiction and constant internal questioning of his policies. In this speech, given 60 years ago today, he set out how he would like terms of debate in his country to work.

Except for that little bit about “U.S. imperialists and their running dogs,” I don’t think there’s an awful lot that the Trump administration would disagree with about this approach by Chairman Mao. After all, the new President has spoken of Vladimir Putin being a “strong” leader, and by that yardstick, Chairman Mao may have been even stronger—not to mention Joseph Stalin and Adolf Hitler.

Oh, by the way: Did I mention that millions of people died in China under the eyes of this “strong” leader? Just something to think about the next time you hear a President refer to “enemies of the people.”
Posted by MikeT at 6:34 PM No comments:

TV Quote of the Day (‘Pretty Little Liars,’ on Hanna’s Lack of Spontaneity)

“Hanna, you're not spontaneous. You make a Pinterest board before you change your nail polish.” —Aria (played by Lucy Hale) to Hana ((played by Ashley Benson), on Pretty Little Liars, Season 5, Episode 4, "Thrown From the Ride," air date July 1, 2014, teleplay by Maya Goldsmith, directed by Janice Cooke
Posted by MikeT at 6:16 PM No comments:

Quote of the Day (William Cowper, on Our Cross—and God’s) 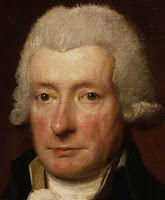 “Let me not angrily declare
No pain was ever sharp like mine,
Nor murmur at the cross I bear,
But rather weep, remembering Thine.”— English poet-hymnist William Cowper (1731-1800), “Prayer for Patience,” in William Cowper's Olney Hymns and Other Sacred Works, compiled by Charles J. Doe (2010)
Posted by MikeT at 10:01 AM No comments: