Quote of the Day (Robert Louis Stevenson, on Why ‘There Are No Foreign Lands’) 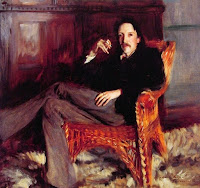 “There are no foreign lands. It is the traveler only who is foreign.” —Robert Louis Stevenson, The Silverado Squatters (1883)

This famous portrait of the writer is by John Singer Sargent.
Posted by MikeT at 6:28 PM No comments:

Two years ago, when I happened to be overnight visiting in town, one of Pittsburgh’s greatest bridges was renamed in honor of one of its most famous sons. The 16st Bridge was rechristened the David McCullough Bridge, in honor of the great historian-biographer (Harry Truman, John Adams, and The Great Bridge, about the Brooklyn Bridge). The ceremony took place on his 80th birthday. I took this photo that weekend, on the day before the big event.

“I learned how to tell a story at my family’s dinner table in Pittsburgh,” McCullough told Marc Myers of The Wall Street Journal back in May, “where my parents and my maternal grandmother told stories about World War I, the city’s terrible floods, violent labor strikes and family eccentrics. I listened carefully and wound up with an appreciation for history.”
Posted by MikeT at 9:43 PM No comments:

Quote of the Day (Edward Hoagland, on Secondhand Lives in the Digital Era) 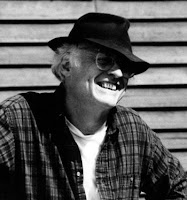 “I appreciate the utility of power in the winter, but many people seldom see a sunrise or sunset nowadays; they’re looking at a screen. What will this do? The Northern Lights, the Big Dipper — are they eclipsed like the multiplication tables? There was a magnetism to aurora borealis or a cradle moon, to spring peepers’ sleigh-bell sound or spindrift surfing toward shore under cumulus clouds, that galvanized delights in us almost Paleolithic.

“Are we stunted if we lose it, a deflation associated with migrating indoors to cyberspace, Facebook instead of faces?” —Essayist-naturalist Edward Hoagland, “Living Life Secondhand,” The New York Times, November 9, 2014
Posted by MikeT at 6:45 PM No comments: 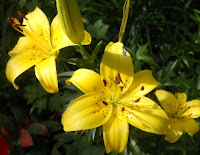 In addition to many lovely examples of Victorian architecture, Chautauqua Institution in upstate New York is filled with all kinds of natural beauty, too—such as this flower I photographed when I vacationed there two years ago.
Posted by MikeT at 9:45 PM No comments:

Quote of the Day (Simon Schama, on the Real Cromwell of ‘Wolf Hall’)

“[W]hen I was doing research for A History of Britain, the documents shouted to high heaven that Thomas Cromwell was, in fact, a detestably self-serving, bullying monster who perfected state terror in England, cooked the evidence, and extracted confessions by torture. He also unleashed small-minded bureaucratic ‘visitors’ to humiliate, evict and dispossess thousands of monks and nuns, not all of whom had their hands up each other’s robes or were passing off pig bones as holy relics. On at least one occasion he had the fake relic and the custodial friar burnt side by side. Witty, that. The fact that Thomas More (who could use some help right now) was likewise not averse to burning people as well as books, if they strayed from sound doctrine, does not mean that Cromwell, in comparison, was a paragon of refreshing straightforwardness. Sure, he was a good family man. So was More. So was Himmler.”— Simon Schama, “What Historians Think of Historical Novels,” The Financial Times, February 13, 2015

Perhaps no greater contrast can be drawn between Sir Thomas More and the man who pursued him to his death, Thomas Cromwell, than in the manner of their falls from power and executions. More, disagreeing with King Henry VIII’s decision to divorce Queen Catherine of Aragon and wed Anne Boleyn, resigned as Lord Chancellor and retreated into silence. His successor, Cromwell (in the accompanying image, the famous painting by Hans Holbein), unsuccessful in making More bend to the new state of affairs in England, pushed to have him indicted, tried and convicted for treason. On the scaffold, More told the crowd assembled that he was “the King’s good servant, but God’s first.”

Cromwell’s end on this date in 1540 did not come with anything like this kind of dignity. Unlike More, he sought to give his aging, sybaritic monarch exactly what he wanted: a toothsome new bride. Was it his fault that Anne of Cleves turned out to be what Henry angrily called his “Flanders mare”? Someone had to pay, and it was going to be the key's chief matchmaker, diplomat and henchman.

And, unlike More, Cromwell begged for pity (“Most gracyous prynce I crye for mercye mercye mercye!” he pleaded in his last letter to the king), all to no avail. A bill of attainder—an act passed by Parliament against a person for a crime, or supposed crime, usually treason, speeding a defendant to punishment without the right to a trial—was used against him. Cromwell was almost certainly innocent, but that mattered as little to Cromwell’s enemies as More’s innocence had mattered to him. Ruthless is as ruthless does.

Oh, and one other detail, rather surprising in its way: this enormously shrewd political operative, who did more perhaps to uproot Roman Catholicism from his country in his century than any other individual, appears to have been reconciled to the Church at his death.

For years, a historical consensus against Cromwell and for More gradually took shape, until it was given harder form in the popular imagination with Robert Bolt’s A Man for All Seasons. All well and good, except that ours is an age that eventually finds flaws in its heroes, and soon enough it was discovered that More had had heretics put to death.

That attitude and policy will not be affirmed or excused here. (Indeed, it is impossible to explain it away when More included the fact that he was “troublesome” to thieves, murderers and heretics on his tombstone.)

But it takes an iconoclast not merely daring but downright foolhardy to revive the reputation of Cromwell while casting More’s in shadow. For all the consummate literary skill of Hilary Mantel’s Wolf Hall and Bring Up the Bodies, she has only provoked arguments from what might be termed “counter-revisionists” such as Schama that are lethal as much for being based on common sense as on historical evidence.

I commented previously on Mantel’s Cromwell novels (with the third book in the trilogy, we are told, to arrive soon) in posts about More’s birth and Anne of Cleves. But now, with Cromwell a minister of all media, if you, will, with adaptations of the first two Mantel novels for Broadway and public television’s Masterpiece, it becomes more important that her views be challenged.

The most obvious error in Mantel’s manipulative recasting of history is this: Just because More hardly qualifies as a perfect man does not make Cromwell a remotely good one. In successfully highlighting the fact that it’s hard to make More a hero of conscience when he punished others for upholding theirs, Mantel forgets to apply the same yardstick to Cromwell. He had as much blood on his hands—and probably more—than More when it came to putting to death those of a different faith.

Even more devastating to Mantel’s case is the naked self-interest exhibited by Cromwell in pursuing Catholics. More was scrupulous about not taking advantage of his legal and political positions for personal gain.  Mantel makes much of Cromwell’s harrowing childhood and rise as a self-made man, but Richard Nixon came from the same background. What the two shared was an instinct for corruption.

Cromwell’s opportunity came in what has become called “The Dissolution of the Monasteries”—or, more graphically (and truthfully) by historian Eamon Duffy, “The Stripping of the Altars.” More than 800 houses of worship in England and Wales were shut down in only four years. Years later, Shakespeare spoke of these "bare ruin'd choirs." The creative carnage involved--mutilated or destroyed statues, frescoes, mosaics, illuminated manuscripts, and shrines--amounted to "a frenzy, obliterating the artistic patrimony of centuries of indigenous craftsmanship with an intensity of hatred for imagery and depicting the divine that has strong and resonant parallels today," according to a

Dominic Selwood article for Britain's Telegraph, which likened the Lord Chancellor's actions to the deprivations now perpetrated by ISIS.

Cromwell facilitated this enormous transfer of land wealth to Henry—a course of action that made him, as one of the king’s favorites, in a prime position to receive corollary wealth.


Not long before his death, the up-from-the-streets Cromwell received a title he had long craved: Earl of Essex. But the grasping architect of state terror didn’t have long to enjoy becoming a noble before his own fall.

Was Cromwell a true believer in the Reformation? Assessing this is far more ambiguous than Mantel would have you think. His motives may have derived less from religious skepticism than from an acquisitive instinct.

Guiding readers through a serpentine political intelligence, Mantel proves a far more subtle and seductive commentator on history than Oliver Stone, but she remains all the more spurious for all that.
Posted by MikeT at 9:25 PM No comments: