“At this propitious time of public distress did Tom Walker set up as a usurer in Boston. His door was soon thronged by customers. The needy and the adventurous; the gambling speculator; the dreaming land jobber; the thriftless tradesman; the merchant with cracked credit; in short, every one driven to raise money by desperate means and desperate sacrifices, hurried to Tom Walker.

“Thus Tom was the universal friend of the needy, and he acted like a ‘friend in need’; that is to say, he always exacted good pay and good security. In proportion to the distress of the applicant was the hardness of his terms. He accumulated bonds and mortgages; gradually squeezed his customers closer and closer; and sent them, at length, dry as a sponge from his door.”— Washington Irving, “The Devil and Tom Walker,” in Tales of a Traveller (1822)

The most durable horror fiction and movies revolve around our deepest instincts or fears: lust (Dracula), scientists playing God (Frankenstein), or individuals pursued by crowds (Invasion of the Body Snatchers). But somewhat less treated, even in recent years, is greed. The most bone-chilling example of the latter that comes to mind is Edith Wharton’s physically and spiritually wintry New England tale, “The Triumph of Night” (discussed in this prior post of mine), in which a Gilded Age grandee plots to take his nephew’s life as a means of seizing his fortune.

Another fine example, I discovered just this past weekend, is Washington Irving’s short story, “The Devil and Tom Walker.” Of course, “The Legend of Sleepy Hollow” has become a permanent addition to Halloween lore, and “The Adventure of the German Student” was included in the Library of America’s estimable two-volume anthology, American Fantastic Tales: Terror and the Uncanny.

But I had never come across “The Devil and Tom Walker” until this past weekend, when I picked up a free book, an American literature textbook for Catholic high school students in the 1950s. I have the distinct impression that, since the postwar era, a selection like this has become less of the norm. New voices have to be accounted for (including from multicultural backgrounds), and Irving’s style—long, flowing sentences, with unfamiliar words such as “termagent”—can turn off students with short attention spans.

More’s the pity, I say. Stick with “The Devil and Tom Walker” and you’ll be riveted by a tale strikingly relevant to our time—and a precursor of a modern Halloween form: mock horror.The latter derives from Irving’s urbane sensibility, a worldview that absorbed other cultures and was not easy to shock.

This past weekend was filled with mock-horror movies: some farcical (Abbott and Costello Meet Frankenstein, Young Frankenstein), some snarky (Jennifer’s Body), and some just plain juvenile (The Lost Boys). In contrast, Irving’s voice is droll and satiric. (When Tom finds evidence that his wife pulled the thick black hair of Satan before the Devil had dispatched her, the miser senses what had happened: “Tom knew his wife’s prowess by experience.”)

At its heart, “The Devil and Tom Walker” is a retelling of the Faust legend: a human being bargains with Old Scratch for short-term advantage, downplaying any lingering inner doubt that in the end, a debt must be paid.

I was surprised to find out that “The Devil and Tom Walker,” in comparison with “Rip Van Winkle” and “The Legend of Sleepy Hollow,” has not been adapted beyond the written page much. One of these, a 2008 short, had actually transposed the setting to the South. New England, with his inhospitable soil and Puritan mores to rebel against, would have been a much more natural background for Satan’s temptation of a miser.

On second thought, though, the switch in locale only reinforces the universality of Irving’s story of avarice (Irving himself had picked up the theme from a German folk tale). In fact, its time period can be changed easily, too, from 1727 Massachusetts to New York in the 21st century. Instead of a usurer (the trade that Satan persuades him to take up), Walker could be depicted as an executive in one of the big banks who, in the financial turbulence of the last decade, manages to fleece customers out of their homes. And, rather than pious Puritans not above colluding in the slave trade or in swindling Native Americans in land deals, Irving could have picked evangelicals who practice their own kind of intolerance and corruption.
Posted by MikeT at 8:30 PM No comments:

Joke of the Day (Jimmy Kimmel, on Halloween and Lady Gaga)

“I wonder if Halloween is the one day of the year Lady Gaga wears sensible slacks.”— Jimmy Kimmel, Jimmy Kimmel Live!, Oct. 31, 2011

Is that what she wears on Halloween?
Posted by MikeT at 6:00 PM No comments:

Quote of the Day (Charles Austin, on 500 Years After Luther) 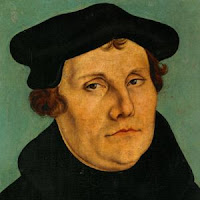 “This year, I am ready to declare the Reformation over. Lutherans and Roman Catholics have been in intensive dialogue for 50 years, reaching remarkable agreements on matters of faith and piety. We still disagree on many things, but we no longer consider each other enemies and believe we are on the way to further unity. Some of our agreements are on the very issues at the heart of Luther's dispute.”— Charles Austin, “The Protestant Reformation: It’s Over,” The Record (Bergen County, NJ), Oct. 22, 2016

Charles Austin, interim pastor at Church of the Savior-Lutheran, of Paramus, NJ, is also a former reporter for The Record and other news organizations. His two professions have offered him a front-row view of the rapprochement between Roman Catholics and Lutherans. The ecumenical movement that led to this growing harmony is all to the good, considering the bad blood that developed between the two religions after Martin Luther's momentous break with the Vatican.

Tomorrow starts a year of observances marking the 500th anniversary of that spiritual tragedy. Let’s hope that Austin is right that, after so much time, the chasm no longer looms so large.

When I was a schoolboy, I had my first inkling of the power of labels to form impressions. Our world history textbook, when it came time to discuss the conflict between Martin Luther and the papacy and the repercussions, announced that it would not use the name that historians to the period, “The Protestant Reformation,” because that would imply that the Roman Catholic Church needed reformation. Instead, it would talk about the “Protestant Revolt.”

In one sense, the writers of the textbook were correct: the most influential historians in the English-speaking world years ago were Protestant and etermined to justify their faith, if not in works then in words. On the other hand, real abuses in the Church (notably, the sale of indulgences) did need to be reformed.

All these years later, having come to understand the anguish caused by loss of faith and loss in lives that resulted from the clash between the Vatican and the rebellious German monk, I think a third term, also using an “R” word, would be more appropriate: the Protestant Rupture—a breach of what had been, by and large, a harmonious relationship, a sudden and complete burst. The religious fissure had repercussions in the political and cultural realms as well, consequences that became seemingly settled for so long that we in the Western world take them largely for granted now.

Austin’s article reinforces the impressions I gleaned on this subject from a current exhibit at the Morgan Library and Museum, “Martin Luther: Words and Images.” The peerless New York cultural institution has supplemented its own collection of rare material from the 16th century with other artifacts on loan from several German museums that have never before been exhibited in the United States.

Austin’s article mentions that new printing presses were the “social media” of their time, and indeed the Morgan exhibit displays several artifacts of this new technology, most notably the document that started it all, Luther’s “Ninety-Five Theses” denouncing the practice of indulgences (used at the time to raise funds for the Sistine Chapel), as well as “On the Babylonian Captivity of the Church” and “On the Freedom of a Christian.”

Luther was a master polemicist, and his vigorously argued broadsides, along with his translation of the Bible into the vernacular, his hymnbooks (“A Mighty Fortress Is Our God” was his composition), and his catechisms did much to stimulate use of the German language.

But his cultural influence went beyond the merely literary. The pamphlet war between Luther and the Church often featured pungent caricatures on both sides, and the appearances of himself and other early Protestant theologians in paintings (such as the very well-known one accompanying this post, by Lucas Cranach the Elder, Luther's friend and neighbor) opened an entirely new area of religious imagery beyond that of the saints.

The Vatican and Luther, believing everything rested on their struggle (including eternal life), hurled the worst kind of invective at each other. The bloodshed that followed the Vatican-Luther split would not abate until the Peace of Westphalia that ended the Thirty Years War in 1748. By the end of that war, eight million people had lost their lives. One can only hope that in these times, people will come to respect each other's good faith, even if they might disagree about their beliefs.
Posted by MikeT at 7:46 PM No comments:

The Funniest Thing I Saw This Weekend

Baby boomers have really gone all in for Halloween, if Bergen County, NJ, where I live, is any indication. The costume figure with the orange hair (which goes nicely with pumpkins all around, doesn’t it?) can be seen—at least for the next several days—on a front lawn in Tenafly, the town north of where I live. At his feet is a sign: “DIPLOMA—Trump U Global Affairs Studies.”

The owner of the house where this figure stands is a Democrat, I suspect. Just a hunch, derived from the Donald Trump figure standing next to another display, showing a blonde and a heavy-set fellow, both behind bars, with a sign reading: “FEDERAL PENITENTIARY: Time 4 Some ‘Jail Problems’ in Fort Lee.”

With Halloween nearly here, I’ve been reading a fair amount  of horror fiction the last week or so, but none of it is as scary as what I read here, in this post by Kristin Salaky from the blog “Talking Points Memo” earlier this month:

“An Indiana man is under fire for creating a parade float that depicts Hillary Clinton in an electric chair with Donald Trump pulling the trigger, local TV station WCPO reported Monday.

“The float, which debuted at the Aurora Farmer’s Fair in Aurora, Indiana, had a lot going on. It featured not only a mock execution of Clinton by Trump, but also an Easter Island head painted black and identified as President Barack Obama, a sign listing some of Clinton's scandals and insults against her, and a Trump/Pence campaign sign (Trump's running mate Mike Pence is the governor of Indiana).”

That explains much about the level of emotion this election year, doesn’t it?
Posted by MikeT at 2:48 PM No comments:

Photo of the Day: Brooklyn Bridge and Beyond, NYC 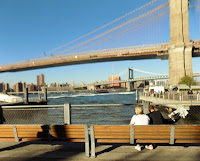 The Brooklyn Bridge is one of the most iconic, beautiful sights in the United States. A few weeks ago, on my way to the Brooklyn Bridge Park, I made sure to photograph the hybrid cable-stayed/suspension bridge that inspired it and that New Yorkers and tourists come to and marvel at.
Posted by MikeT at 10:25 PM No comments: