Quote of the Day (Jonathan Raban, on How Travel and Writing Differ)

“Writing—real writing, in the iron discipline of a book—is the mirror opposite of traveling. A book is a strictly subordinated world. Its logic, of symbol and metaphor, is at once tantalizingly suggestive and ruthlessly exclusive. From the moment that a narrative begins to develop its own momentum, it insists on what it needs and what it has no time for. It's at his peril that the writer loses sight of where the book began and where it's destined to find an ending. (Endings almost invariably change as the book develops, but the sense of an ending is crucial, even if it turns out to be nothing like the ending.) Writing is—in the terms of Philosophy 101—all cause, cause, cause, where traveling is a long cascade of one damn contingency after another. Good writing demands the long view, under a sky of unbroken blue; good traveling requires one to submit to the fogginess of things, the short-term, minute-by-minute experiencing of the world. It’s no wonder that my alter ego and I are on such bad terms.”—Jonathan Raban, “Notes From the Road,” in The Writing Life: Writers on How They Think and Work, edited by Marie Arana (2003)
Posted by MikeT at 2:48 AM No comments:

I’m really not a fan of one-man shows. To me, it’s a way of reducing one of Broadway’s sorriest long-term trends—smaller casts for the sake of trimming costs—to their logical conclusion. And somehow, for the average theatergoer, the price of a ticket, even without supporting cast members (in this scenario, regarded as expendable as spear carriers), remains unduly high.

But Just Jim Dale led me to lay aside, at least for awhile, my feelings about such shows. I hadn’t known what to expect going on, other than the fact that its star, Jim Dale, is a hardy—and celebrated—Broadway institution. His talents, I firmly believe now, were sadly underused in two other Roundabout Theatre shows that I saw several years ago, The Road to Mecca and The Threepenny Opera.

But you owe it to yourself to catch this show before it closes August 10. Otherwise, you will be missing the chance to experience not just a half-century of life in the theater, but even a kind of Zelig of late-20th century entertainment: someone who's engaged knockabout English revues, rock ‘n’ roll, composing for film, classical theater, Broadway, and audiotapes of famous—very famous—novels.

It helps that Dale is in one of the Roundabout’s most intimate venues, the Laura Pels Theatre, but you get the sense he would be comfortable anywhere. Much of this derives from the English music-hall tradition, which, he notes, lasted for 180 years, up to the 1960s. It seems obvious that he developed his talent for, in effect, shrinking the size of any theater from this form of entertainment, which placed a premium on audience participation and familiarity. (Fans would not only come out for the same shows year after year, he noted, but crave the exact same jokes each time.)

A short stint as a rock ‘n’ roll singer in the early 1960s led to one of the most surprising interludes of his career: writing the lyrics for the title tune of the movie Georgy Girl. In one of the most hilarious segments in an hour and 40 minutes filled with them, Dale recounted his bewildered of the song for two heavyset men in dark suits who complained that the song “just won’t woik,” because it had to be “a song that Frank [Sinatra] would do.” (Time would vindicate Dale and his composer partner, Dusty Springfield’s brother Tom, with the pair scoring an Oscar nomination.)

Most fans, however, came to know Dale when he moved front and center into the theater world. The show features his inspired dramatic soliloquys from Noel Coward’s Fumed Oak and Peter Nichols’ Day in the Death of Joe Egg; a ferocious tongue-twisting number on all the phrases created by The Bard, “You’re Quoting Shakespeare”; and descriptions of acrobatic performances in the likes of Scapino and Barnum.

While Dale has been recently inducted into the American Theater Hall of Fame for his years of work in such shows, he has gained a whole new generation of fans through a very different source: narrating all seven audiobooks for the Harry Potter series, which required him to create more than 200 voices in J.K. Rowlings’ teeming fantasy universe. In one scene in this solo show, he recreates his first, agonizing day of appearing in an unfamiliar medium with its own unique demands.

From first to late, what strikes you most about Dale is his physical dexterity. When first contemplating getting into the entertainment business, he recalls, his father’s advice was short and simple: “Learn to move.” Seldom in show-business history has advice been better heeded. Even at age 78, Dale possesses the same kind of gift for transcendent physical comedy that Dick Van Dyke displayed 50 years ago on his sitcom. He shows, for instance, how his career began in earnest: when, as a youth, when his dancing partner missed a ballet competition, he impressed the judges, in spite of themselves, by performing the pas de deux without her, as much by laughing themselves silly as by the moves he executed.

The constant interaction with audience members might lead one to believe that the show is spontaneous, but the whole thing is carefully scripted, revealed director Richard Maltby, Jr. in one of the Roundabout’s “Celebrity” post-show “talk-backs” with audience members. Like his good friend, fellow theater legend Frank Langella, Dale has been “dining out” on favorite stories from his long career, with the tales improving with each telling. The show was an attempt to mold them into coherent order.

Somewhat to his chagrin, Maltby achieved some of his greatest recognition in the theater with his work on two Tony Award-winning musical reviews: Ain’t Misbehavin’ and Fosse. Though he professes not to be a fan of the form, he has performed similar sterling work by developing a through line for one of the entertainment industry’s most multifaceted—not to mention charming and talented—performers. I can easily see its star taking Just Jim Dale on the road for as long as he wants.
Posted by MikeT at 8:17 PM 1 comment:

Movie Quote of the Day (‘Breaking Away,’ on the Joy of All Things Italian) 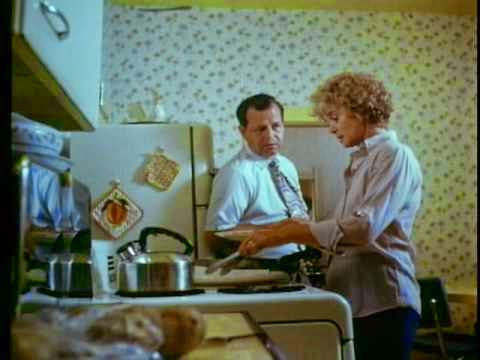 Dad (played by Paul Dooley): “What is this?”

Dad: “I know I-tey food when I hear it! It's all them ‘eenie’ foods... zucchini... and linguine... and fettuccine. I want some American food, dammit! I want French fries!”

Mom: [to the cat, who has jumped up onto the table] “Oh, get off the table, Fellini!”

“Dad” is not, under normal circumstances, such a sputtering zenophobe. He’s merely reacting to circumstances—or, to be exact, a teenage son who, in his overwhelming admiration for the Italian cycling team, has taken not only to riding sleek bikes, but also to shaving his legs, singing opera, exploring Catholicism, and greeting his father with “Buon giorno, Papa!”

Breaking Away, released in American theaters this month 35 years ago, broke away from the pack of bigger-budget films to become a box-office hit and Best Picture nominee at the Oscars. A true sleeper hit, it lacked stars recognizable at the time (though Dennis Quaid made the most of his opportunity), but it was blessed with a host of lines from Steve Tesich that would win him the Oscar for Best Original Screenplay.

All these years, I had thought that Tesich, a Yugoslav emigrant, had merely slightly exaggerated America’s embrace of the foreigner. But it turns out that his Italophile character, Dave, bears a strong resemblance to a real-life college friend named Dave who also loved bicycling and all things related to Italy.

Dave's comic embrace of the foreign, in a sense, stands for America's embrace of starry-eyed newcomers such as Tesich.  In the screenwriter's Oscar acceptance speech, he remembered:


“Long before I actually saw America, my first glimpses of it were in a movie house in Yugoslavia. It was a western, Stagecoach, and it seemed like a wonderful, endless frontier of a country where these good and evil characters fought it out for the soul of America. And after all these years of being here I am just so grateful to be given an opportunity to send back a film and to tell 'em that I find it very much like the place I had seen originally: The good and the bad still fight it out; the good still tend to win in the end.”

Yet, for all its joy, the film is not all sweetness and light. There has to be something overcome for a plot to cohere, and not just, as in this instance, an example of a generation gap taken to the absurd.

While Tesich’s college friend Dave competed in bicycle races in the middle of the Kennedy administration, the movie Dave and his pals do so in the summer of discontent in the Jimmy Carter era, as the Middle America of the Stollers must deal with uncertainty and gnawing concern that the American Dream has become an empty shell.

The four friends meet at an abandoned quarry out in the woods. Years ago, Dave’s dad had labored in the same spot, helping to build a gleaming university. Now, Mr. Stoller wonders what it was all for: upper-class frat boys at this institution of higher learning lord it over his son and his friend with the epithet “cutters” (short for “stonecutters”).

At the time the film was released, I felt myself not far removed from the kind of crossroads where Dave finds himself. I also was the product of a working-class background, but had also just finished my first year of college. I didn't want my education ever to leave me with the same condescending attitude that the students in the movie display toward the lower-class "townies."

Just days before the film was released, Jimmy Carter had delivered a controversial address to the nation in which he noted a crisis of the spirit that prevented America from dealing with its serious energy problems, including long lines at the gas pump. Though entirely coincidental (years can elapse between a film’s initial pitch to Hollywood execs and its release in cinemas), it somehow seems appropriate that the climactic race in the film relies not on the squealing auto tires of director Peter Yates’ Bullitt 11 years before, but on low-tech but more impressive feats of skill and teamwork on a simple bicycle.

This is part of a continuing series on the Brooklyn Botanic Garden that began with posts on its Cherry Esplanade and a pink Asiatic lily on the grounds. The site also includes this example of a Japanese-inspired garden, mixing a pond, wooden bridges, stone lanterns, a viewing pavilion, the torii or gateway, and a Shinto shrine.
Posted by MikeT at 9:47 PM No comments: