TV Quote of the Day (‘Parks and Recreation,” on Frozen Yogurt) 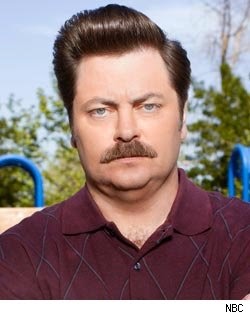 “Dear frozen yogurt, you are the celery of desserts. Be ice cream or be nothing. Zero stars." —Ron Swanson (played by Nick Offerman),writing a complaint letter, on Parks and Recreation, Season 6, Episode 14, "Anniversaries," air date February 27, 2014, teleplay by Megan Amram, directed by Morgan Sackett
Posted by MikeT at 3:55 AM No comments: 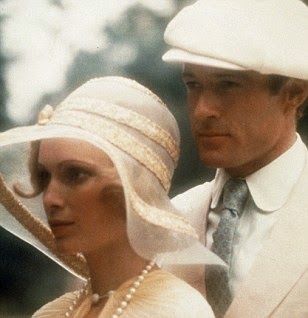 It’s seldom a good thing when a new film’s budget and clothes receive more media attention than its script, direction or even cast. So it proved with the third film version of The Great Gatsby, which premiered in New York on March 27, 1974 and opened in wider release two days later. Attendees at the premiere came dressed in the 1920s flapper beads and feathers depicted in the movie.

Theoni Aldredge won the Oscar for the film’s costumes (though Ralph Lauren, himself a Gatsby-like character with his reinvention of self, probably deserved at least half of the award, as he designed the clothes for all the men in the film), but that proved to be only one of two Academy Awards (and minor ones at that) gained by the movie. Precious little else associated with the adaptation of the classic novel by F. Scott Fitzgerald attracted the public’s attention. The hype, starting with the $6.4 million budget, was so immense—including covers by Time and Newsweek—that it triggered a critical backlash.

Expectations were high also because of its star, Robert Redford, coming into his own then as Hollywood’s epitome of the elusive leading man, following the huge hit The Way We Were. Total domestic grosses for the film were $20.6 million, more than making the film’s money back, but the exalted nature of the source material, the star, and the hype left an air of disappointment around the movie so heavy that a misimpression spread that it was simply a financial disaster for Paramount Pictures.

Much of that had to do with a critical reception that was, at best, tepid. The New York Times’ Vincent Canby represented the consensus by noting that, while the sets, costumes and even some performances were “exceptionally good,” the movie as a whole “is as lifeless as a body that's been too long at the bottom of a swimming pool.”

It might be time to revisit the film, both in comparison to other versions of the book and on its own terms. The budget notwithstanding, this Gatsby was less a case of wretched excess than a piece of cinema as stately as a luxury ocean liner. This was in marked contrast to the Baz Luhrmann version that opened last year—which, against all odds (especially the very mixed critical reaction), became a hit. (See my take on one serious difference between novel and film—the treatment of “incurably dishonest” golfer Jordan Baker.)

Luhrmann made all kinds of questionable alterations in bringing his vision of the book to the big screen—including an anachronistic score (one problem not applicable to Nelson Riddle's Oscar-winning one for the '74 version) and turning the novel’s first-person narrator, Nick Carraway, into an alcoholic retelling the events. The 1926 silent film version was, in the words of Zelda Fitzgerald, so “ROTTEN and awful and terrible” that she and her husband walked out of the theater. In 1949, the first sound version, starring Alan Ladd and directed by Elliott Nugent, featured a script that left little sense of the novel’s subtlety, largely because of its heavy moralizing, its altered youthful background for Gatsby, and (oddly enough, for a film only 20 years after the decade shown) no flavor for the Prohibition era.

In 1974, concern arose over whether a foreign director sufficiently understood the United States to deal what with many people (including myself) regard as the Great American Novel. But that, by itself, should not have disqualified director Jack Clayton. Going back to Alexis de Tocqueville, some of the most astute commentators on America have been foreigners who came to the nation with fresh eyes. In film, Alfred Hitchcock adapted quickly to the United States as a subject, despite spending the first 40 years of his life in Britain.

In fact, much of Clayton’s prior work would have encouraged hope that he was well-equipped to handle this material. Not only had he directed critically acclaimed adaptations of literary classics (e.g., The Innocents, his 1961 version of Henry James’ Turn of the Screw), but he had also directed another film about a male social climber (Room at the Top).

For all the problems that reviewers found in the finished product, it could have been worse. The first screenplay draft, by Truman Capote (Clayton’s collaborator on The Innocents), was understandably deemed problematic: Clayton, according to Carolyne Bevan’s summary of the director’s archive in the British Film Institute, felt it was “like a great fish that is all head and no tail”—too long, with too little about the past relationship between Gatsby and Daisy Buchanan and too much action in the final minutes.

Moreover, given Capote’s depiction of Nick as gay and Jordan Baker as lesbian, Clayton and Paramount Pictures would have outraged Fitzgerald’s daughter, Frances “Scottie” Fitzgerald Lanehan Smith, for being untrue to the book and for introducing risqué material that would have undercut a potentially large audience: high-school students assigned the book for class.

Wayne Gooderham, in a post for The Guardian’s blog, has argued that Capote’s 1958 novella Breakfast at Tiffany’s was, in a sense, an attempt to rewrite The Great Gatsby. Sixteen years later, in the midst of a downward creative and personal spiral, Capote went a couple of steps too far in working with the real thing, and he was off the project.

If Scottie Smith did not want the “gangster” elements of her father’s novel to be overemphasized, the selection of Francis Ford Coppola, director of The Godfather, as Capote’s screenwriting replacement would not have reassured her. In actuality, she need not have worried: that film and its sequel, it can be seen now, relate to the same thing as Gatsby: the corruption of The American Dream. Coppola also turned around his screenplay in three weeks, giving Clayton sufficient time to ponder possible improvements (e.g., focusing more intently on Gatsby’s pool as a plot element).

Would any of the other actors considered for the role--Steve McQueen, Marlon Brando, Jack Nicholson, and Warren Beatty—have worked out better than Robert Redford? Possibly only Beatty, of the same age and glamor as Redford. But Beatty’s terms—direct it himself, with Paramount head Robert Evans playing Gatsby—were non-starters. The evidence is not as clear-cut concerning the others vying with Mia Farrow for Daisy: Faye Dunaway, Candice Bergen, Katharine Ross and Lois Chiles. (As things turned out, Farrow edged out Bergen with what Clayton called a “sensational” test performance, and Chiles had the consolation role of Jordan Baker.)

Mia Farrow’s memoir has suggested that Redford was so engrossed in the Watergate hearings during filming that their scenes together lacked sufficient chemistry. But the problem with the film might have been more basic: faithfulness does not necessarily equate to passion, which lifts what would otherwise be Scott Fitzgerald’s bitterly ironic vision of the moral vacuum in post-WWI America.

Blogging about the 1926 silent Gatsby (lost, save for the trailer), The New Yorker’s Richard Brody suggested three other directors active in 1974 who might have been equal to this material: Robert Altman, Luchino Visconti, and Alain Resnais. But, as I argued in a previous post about An American Tragedy, another filmmaker, still alive during the film’s shooting in 1973, might have been the best choice: George Stevens. A master of movement, sound and editing, Stevens had even been able to find grace notes in Theodore Dreiser’s clunky novel of desire, class and crime when he directed A Place in the Sun. Think what he could have done with Fitzgerald’s lyrical elegy on the same subjects.
Posted by MikeT at 10:14 PM No comments:

Quote of the Day (Ronald Knox, on ‘Waiting Upon God’) 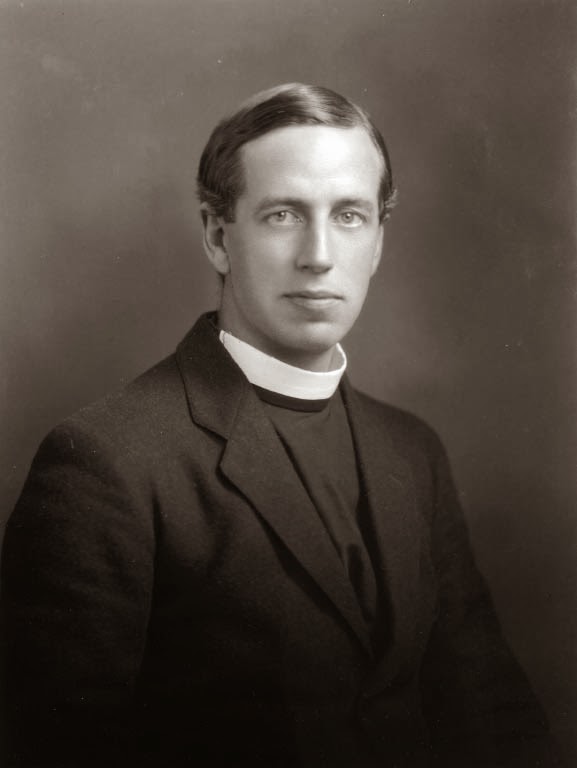 “The love of obscurity, of waiting upon God alone and letting the world go its own way without you, is an integral part of sanctity.”—Fr. Ronald Knox, Pastoral Sermons and Occasional Sermons (1940)
Posted by MikeT at 6:30 AM No comments:

Quote of the Day (Fannie Flagg, on the Perils of Perkiness) 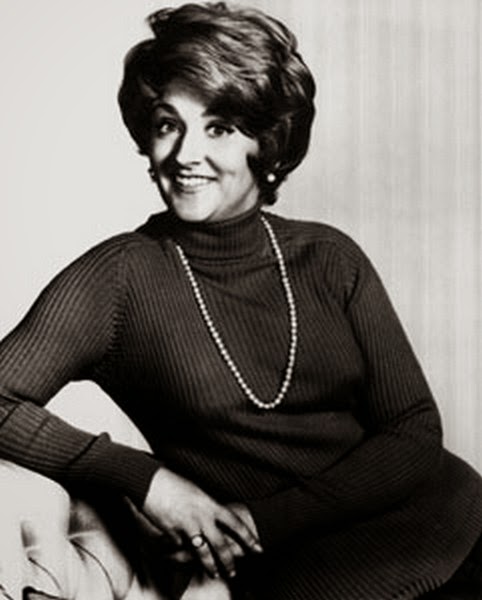 “There's nothing more unattractive than a sixty-year-old ex-cheerleader still trying to be perky.” —Fannie Flagg, The All-Girl Filling Station's Last Reunion: A Novel (2013)

(This photograph of author-actress Fannie Flagg—best known for the novel Fried Green  Tomatoes at the Whistle-Stop Cafe--was taken in 1972 for the CBS Network, where was appearing as a regular on The New Dick Van Dyke Show.)
Posted by MikeT at 7:23 AM No comments:

Quote of the Day (Thomas Cahill, on the ‘Dream of Something New’) 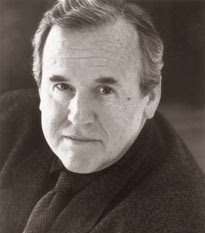 “Out of mortal imagination comes a dream of something new, something better, something yet to happen, something—in the future.”―Thomas Cahill, The Gifts of the Jews: How a Tribe of Desert Nomads Changed the Way Everyone Thinks and Feels (1998)
Posted by MikeT at 2:58 AM No comments: