Quote of the Day (Jonathan Swift, on Satire) 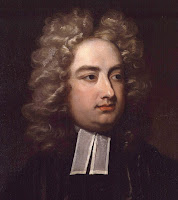 “Satire is a sort of glass wherein beholders do generally discover everybody’s face but their own; which is the chief reason for that kind reception it meets with in the world, and that so very few are offended with it.”—Anglo-Irish satirist Jonathan Swift (1667-1745), The Battle of the Books (1704)

Today marks the 350th anniversary of the birth of Jonathan Swift.  Contrary to recent rumor, the term “Swiftian” does not apply to a certain pop songstress who rakes ex-beaus over the coals for their sins, but instead to this novelist and pamphleteer and his style of satire exhibited in Gulliver’s Travels (mistakenly marketed for years as a children’s book) and “A Modest Proposal”: caustic, bitter, featuring an unreliable narrator, and ferocious toward what a later writer in this tradition, the American Mark Twain, once called “the damned human race.”
Posted by MikeT at 8:49 PM No comments:

Tweet of the Day (Phil Simms, on Eli Manning) 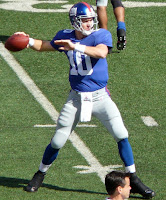 “#EliManning can stand tall and proud and will for the rest of his life for all he has been to @Giants —Fans will never forget him #GiantsPride.”—Former New York Giant quarterback and current sportscaster Phil Simms, on his old team’s horrendous, humiliating, deeply shameful decision to bench two-time Super Bowl MVP Eli Manning, tweet of Nov. 28, 2017

(The accompanying photo of Eli Manning, showing the quarterback in a pre-game warm-up, was created Oct. 11, 2009, by Marianne O'Leary.)
Posted by MikeT at 7:45 PM No comments: 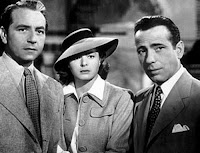 One of the most beloved movies of all time, Casablanca—released 75 years ago this month in New York—was also one of the most unlikely films ever to become a classic.

It was not the kind of biopic, costume drama or adaptation of a major novel or play that is traditional Best Picture Oscar bait, but instead a picked-up property, an unproduced drama called Everybody Comes to Rick’s.

Once Warner Brothers and producer Hal Wallis passed on the two actors originally considered for the leads (George Raft and Ann Sheridan), they still faced the difficulty of making the assembled cast and crew cohere.

With no settled ending during much of production, Ingrid Bergman was uncertain how to play her love scenes as Ilsa (although she was certain that the actor who portrayed her husband, Paul Henreid, was self-important). The actress was also taller than Humphrey Bogart, so their size difference had to be eliminated by having him stand on boxes and being photographed from favorable angles. Even that didn’t completely mollify Bogie, who—in the death throes of his first marriage—was drinking heavily and bickering constantly with one of the studio’s favorite directors, Michael Curtiz.

Somehow, in the end, despite its numerous problems throughout shooting, the world did come to think that “the problems of three little people” “amount[ed] to a hill of beans in this crazy world.” Casablanca turned Bogart not just into a lead who could carry a film (as he had been since High Sierra and The Maltese Falcon the year before), but also as a romantic—if unconventional and complicated—leading man, even as an international prototype of an existentialist hero who, despite a cynical surface, is forced to act for good amid an evil world.

While his innate acting skill and his offscreen anguish combined to produce the requisite misery of Bogart’s Rick Blaine, we can’t bypass the script. The credited screenwriters, Koch and the Epstein brothers, contributed unique points of view to the final product, including many of the most quoted lines in film history (Claude Rains’ “Round up the usual suspects”).

But it was the uncredited Casey Robinson who may have made the most significant contribution, according to Frank Miller, author of a book on the making of the film. It was Robinson who thought that Rick should tell Ilsa to get on the plane for the good of the cause.

For a fine brief retrospective of this improbable cinema triumph, what many think of as the “Great American Movie,” I urge you to read Robert Garnett’s excellent article in this past weekend’s Wall Street Journal.
Posted by MikeT at 6:44 PM No comments:

Quote of the Day (Alexander Bickel, on Government and ‘The Arts of Compromise’) 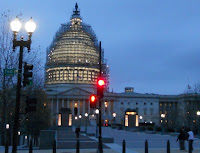 “No society, certainly not a large and heterogeneous one, can fail in time to explode if it is deprived of the arts of compromise, if it knows no ways of muddling through.”— Constitutional law expert Alexander M. Bickel (1924-1974), The Least Dangerous Branch: The Supreme Court at the Bar of Politics (1962)

I took the photo accompanying this post two years ago, on a vacation down to DC. No matter how dysfunctional I thought Capitol Hill then, it’s nothing like now.
Posted by MikeT at 6:06 PM No comments:

Quote of the Day (William Blake, on ‘Fetters for the Mind’) 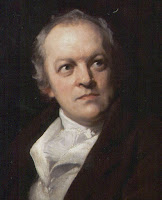 “Deceit to secrecy confin'd,
Lawful, cautious and refin'd;
To anything but interest blind,
And forges fetters for the mind.” —English poet, painter and printmaker William Blake (1757-1827), Gnomic Verses, from The Notebook of William Blake

The great Romantic poet William Blake was born in the Soho section of London, England, 260 years ago today.
Posted by MikeT at 5:33 PM No comments: