Quote of the Day (John Cheever, on a Female Terror) 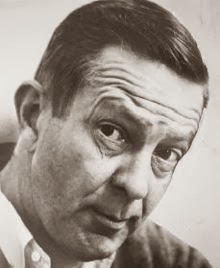 “It was a Sunday evening; he had left a cocktail party in a Washington Square apartment and had decided to walk a few blocks up Fifth Avenue before he took a bus. As he was passing the Brevoort, Joan called to him. She was with a man at one of the tables on the sidewalk. She looked cool and fresh, and the man appeared to be respectable. His name, it turned out, was Pete Bristol. He invited Jack to sit down and join in a celebration….They had dinner and drank champagne with their dinner. They drank more champagne afterward and then went over to the Lafayette and then to two or three other places. Joan had always been tireless in her gentle way. She hated to see the night end, and it was after three o'clock when Jack stumbled into his apartment. The following morning he woke up haggard and sick, and with no recollection of the last hour or so of the previous evening. His suit was soiled and he had lost his hat. He didn't get to his office until eleven. Joan had already called him twice, and she called him again soon after he got in. There was no hoarseness at all in her voice.”—John Cheever, “Torch Song,” from The Stories of John Cheever (1978)

This being Halloween, it’s appropriate to discuss this elegant exercise in Jamesian horror and ambiguity. Along with the usual notes of beauty and wistfulness associated with John Cheever, there’s a sense throughout that something more is deeply wrong here. There’s a dead giveaway even in the second sentence: “She always wore black, and he (Jack) was always given the feeling, by a curious disorder in her apartment, that the undertakers had just left.” Over a year later, when he comes to the apartment of the woman he nicknames "The Widow" again, there is “a death rattle in the lock” when he rings the doorbell.

The dominant impression of a John Cheever short story is of a mid-20th century suburbanite seeking elation and grace at a party that inevitably ends with someone, usually the male protagonist, getting drunk, flirtatious, stupid and even violent. Jack Lorey, a WWII vet who knows Joan Harris from their Midwestern small town, could be a kind of literary counterpart to Mad Men’s Roger Sterling in his surface charm, serial marriages and slow-dawning realization that he has let his life slip away. Except that Roger does not come within the sights of an emotional vampire after a series of debauches.

In the preface to his Library of America horror anthology, American Fantastic Tales, Peter Straub identifies an instinct associated with terror and the uncanny dating back to the Puritans: “the surrender or collapse of the individual will.” Particularly in its latest season, Mad Men has shown how this collapse has undermined Roger, Don Draper, and other males on the show. That psychic deterioration has been a long time coming. So does the unraveling of Jack Lorey.

You might think it entirely coincidental that Roger’s secretary on Mad Men shares the same name as the big, healthy woman who may well be far more in Cheever’s much-anthological story. But remember that, as the seminal series about the Sixties begins, Don Draper lives in Ossining, the town at the heart of Cheever Country.

Cheever has been labeled “the Chekhov of the suburbs,” but the other nickname for him, “the Ovid of Ossining,” sounds, in instances such as “Torch Song,” more appropriate—testimony to the astonishing metamorphoses experienced by his characters when they are fully in the grip of desires beyond their control.

The heartache underlying so much of his fiction derives from the vast distance between the states of grace sought by his men (and they are, overwhelmingly, men) and the circumference of everyday life. That distance also accounts for the element of the fantastical in his work. No less than “The Enormous Radio” and “The Swimmer,” “Torch Song” mixes the real and the surreal.

At the same time, the mounting terror in the story also results from an ambiguity at its heart: how much of Jack’s final lashing out against his longtime female friend as a “lewd and searching shape of death” comes from an actual realization of her true nature versus the distorted psychological understanding of a diseased man?

Joan has a habit of picking one drunk, drug addict, consumptive, and general abuser after another. Yet, for all her bad luck, she hardly seems to have aged.

“Torch Song,” like so much of Cheever’s fiction, clearly reflects the author’s misogyny. If Joan Harris is, in fact, a psychological vampire who drains her male victims of their energy and life essence, if not of their physical blood, then the violent ways they act to expunge her from their lives become justified, in their twisted way of thinking. Thus, “Torch Song” has become anthologized not just in horror anthologies, but even at least one on domestic violence (Mark Spilka’s ironically titled Eight Lessons in Love: A Domestic Violence Reader).

Posthumous revelations about Cheever’s private life have led some to see this tale as a manifestation of his sexual orientation. By this reckoning, the numerous lovers of Joan that keep dying are, symbolically, fellow homosexuals that the closeted Cheever would have regarded as sick. An interesting, but probably too reductive, take on a tale that mounts in ambiguity and dread from first to last.
Posted by MikeT at 10:42 PM No comments:

Photo of the Day: Halloween House

When I was a kid, my fellow baby boomers went for Halloween in a big way, going house to house trick-or-treating. We might not go for that particular pastime anymore, but we love this day even more than ever now that we’re adults. When we’re not getting dressed up in costumes (or, has become increasingly the norm for some in decidedly scanty outfits, undressed in costumes), our houses become elements of our fantasies.

If you’re going to go in for that, I think, you might as well go all the way. Attention to detail has to be the norm. No half measures. This particular house, only a couple of blocks from me in my hometown, Englewood, NJ, does the job, I’d say, wouldn’t you?
Posted by MikeT at 10:20 PM No comments:

Quote of the Day (Muriel Rukeyser, on the Universe and Stories)

Quote of the Day (David Remnick, on DJ Jonathan Schwartz)

“The pauses suggest an ego—or, better, an assurance that you, the listener, will wait. It is the assurance of a horn player—Miles Davis on ‘All Blues’—who comes in at his own sweet bidding, knowing that the waiting is as much a part of the music, the desired atmosphere, as the phrase that comes next. And that is what [WNYC-FM deejay Jonathan] Schwartz is selling—not one record after another so much as the creation of an atmosphere in which the Great American Songbook is, in his view, properly tendered and absorbed. He casts the spell of steady rain at night, languorous autumn afternoons. Now it is 1964. The Stones have issued their début record. But that is elsewhere. Norman Simmons is at the piano. Carmen McRae sings ‘I’m Going to Laugh You Right Out of My Life.’”— David Remnick, “The Talk of the Town-- In the Studio: Glad To Be Unhappy,” The New Yorker, November 4, 2013

In addition to David Remnick’s fine “Talk of the Town” profile of Schwartz (pictured), by all means check out the 75-year-old deejay’s 112 favorite CDs associated with the Great American Songbook, from The New Yorker’s Web site. Better yet, read Schwartz’s evocative 2004 memoir, All in Good Time.
Posted by MikeT at 3:07 AM No comments:

Photo of the Day: Vertical Jack-O’-Lanterns

I took this shot in front of a home a few blocks from me, in Englewood, NJ.
Posted by MikeT at 5:09 PM No comments: