Photo of the Day: Collective Self-Portrait in Gotham 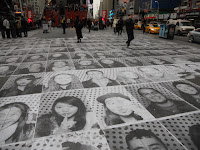 A week ago, passing across midtown Manhattan’s Duffy Square, I was startled to come across what is being called “participatory public art.” Last week’s issue of Time Out New York included the “Inside Out Project” among the city’s examples of “outdoor art.”

What was happening was this: At a specially designed photo booth in Times Square, passersby could have their pictures taken, then have these black-and-white self-portraits overlaid on a backdrop created by the artist JR. (Question: “JR? You mean the guy in Dallas that just died?” Answer: I don’t know if this artist is into hats, but he’s French, so my guess is the Texas city is not his style.)

These posters, I had read, would be on display through May 10. Yesterday morning, I wondered if the project had come to a premature end, as I saw street cleaners mopping up the remains of these posters. Why were they sweeping these up? Because of the rain beginning to fall? Because new portraits needed to be made? Or because they couldn't last?

But this afternoon, I saw a whole new set, ready to replace the old images.

It’s almost Whitmanesque, this celebratory Song of Ourselves. Sadly, though it might be public art, it’s also, at heart, ephemeral art, too. The black-and-white posters seen here are already history. The image you see on your screen now is the last evidence of their existence.
Posted by MikeT at 10:25 PM No comments:

Quote of the Day (Andy Richter, on Paul McCartney Lyrics) 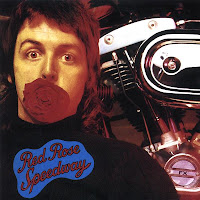 “When I want to alert my children to the dangers of marijuana abuse, I just print out the lyrics to some Wings' songs.”—Comedian/second banana Andy Richter, April 26, 2013 tweet

According to Skylark, Philip Furia’s biography of Johnny Mercer, the singer Margaret Whiting was used as an intermediary to sound out the Oscar-winning lyricist of “Moon River” and “Days of Wine and Roses” about the possibility of collaborating with Paul McCartney. Mercer turned down the invitation, using as an excuse his wife’s fragile health, though more likely it was his own (he died shortly afterward). There are conflicting reports about the Georgia-born writer’s feelings about the Beatles, but he is unlikely to have been impressed with most of McCartney’s lyrics in the Seventies.

Andy Richter’s comment brings to mind the usual complaints about the “cute Beatle” after his breakup from longtime songwriting partner John Lennon. Case in point of what Richter and the other (less snarky) critics have in mind: the album Red Rose Speedway, released in the United States on this date 40 years ago, recorded with the backup band Wings. It was a success, of course, hitting #1 in the U.S., including the singer's tribute to wife Linda, "My Love." But...

Amazingly, McCartney thought seriously about releasing this as a double album. (Other songs, released in other formats later, were “Live and Let Die,” admittedly one of the better James Bond songs, and “Hi Hi Hi,” which—well, talking about “who you gonna creep on next”!)

Of course, Richter’s jibe could apply just about across the whole spectrum of rock ‘n’ roll. I mean, can anyone really explain America’s “Horse With No Name”? And let’s not get anywhere near their “Muskrat Love”!
Posted by MikeT at 2:45 AM 1 comment: 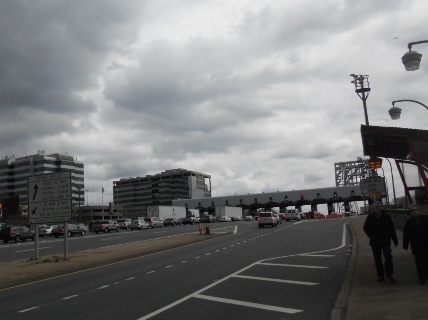 Over the years, from waiting at the bus station, I’ve become extremely familiar with this view of the northeast part of New Jersey and what lies beyond the George Washington Bridge: the Big Apple. Yet two weeks ago, I was struck by how it can seem so different to the camera eye: the stripes moving into the distance, the upward movement of the ground, the cloud mass.

This sudden sense taught me not to take for granted an engineering miracle that, especially when originally built, in 1931—and even today—was extraordinary.
Posted by MikeT at 9:45 PM No comments: 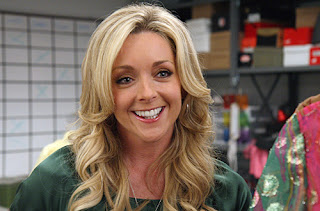 ''And maybe you ought to look in the mirror before leaving your house in the morning because you look like someone's been slowly poisoning Sally Field.'' —Jenna (played by Jane Krakowski), to Liz Lemon (played  by Tina Fey), on 30 Rock, Season 7, Episode 2, “Governor Dunston,” written and directed by Robert Carlock, air date October 11, 2012
Posted by MikeT at 2:41 AM No comments:

Quote of the Day (Reinhold Niebuhr, on ‘Glimpses of Ultimate Perfection Within Imperfection’)

“When the storms and fevers of this era are passed, and modern civilization has achieved a social system which provides some basic justice compatible with the necessities of a technical age, the perennial problems of humanity will emerge once more. Religious insights which seem inimical to moral progress and moral vigor will come into their own again. There will be unjust men in this new society of justice; and good men will feel that they are not as just as they ought to be. The perils of nature and the inhumanities of man will continue to take their toll in human life.…

“Then men will see again the importance of accommodating the vision of perfection to an imperfect world, without losing the urge to perfect the world. In order to do this, they must find suggestions of meaning in chaos and glimpses of ultimate perfection within imperfection.”-- Reinhold Niebuhr (1892-1971), “The Assurance of Grace,” in The Essential Reinhold Niebuhr:  Selected Essays and Addresses, edited by Robert MacAfee Brown (1986)
Posted by MikeT at 5:46 PM No comments: