Flashback, May 1969: Crosby, Stills and Nash Score With 1st LP 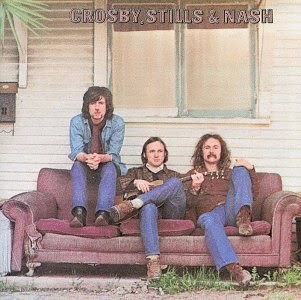 Arguably the first, most successful, influential—and combustible—American rock supergroup, Crosby, Stills, and Nash, surpassed even the expectations raised by their experiences in their prior bands, with their self-titled LP released at the end of May 1969.

David Crosby, Stephen Stills and Graham Nash—refugees from, respectively, The Byrds, Buffalo Springfield and The Hollies—brought complementary strengths that meshed beautifully in these 10 songs that immediately became staples of AM and FM radio: social commentary and moody introspective pieces (Crosby), broad-ranging musical skills and a feel for country-music textures (Stills) and melodic pop (Nash).

The group formed and signed with Atlantic for creative, personal and legal reasons. Crosby had been kicked out of The Byrds because of his increasing wish to write songs (which, he had come to see, was where the real money from music came from) and his difficulty in getting along with the other bandmates. Columbia Records head Clive Davis gladly gave him his freedom, figuring his days as a commercial force, outside the Byrds, were over. Crosby urged his new friend, Nash, to leave his British group, The Hollies, which had rejected his songs.

Following the breakup of Buffalo Springfield, Stills was still on the Atlantic label. With Crosby, in effect, a free agent and able to join him, that left only Nash at large. That problem was solved when Atlantic, in effect, traded Stills’ former bandmate, Richie Furay (who had moved on to the country-rock group Poco) to Columbia to effect Nash’s release at that label from the Hollies.

In order to make sure that future incarnations of the band could tour if a member departed, the new trio decided to use their surnames to christen the new entity. But what would be the order of the names? In an early hint at the later ego problems that would roil their relationships, Stills wanted his name first. He seemed to have a fair claim to it, as their label was his original one and, as the group member most musically versatile (he would play every instrument on their debut LP except drums), he was the dominant studio presence. But he was outvoted 2-1 when Crosby cheerfully went along with Nash’s insistence that “Crosby, Stills, and Nash” rolled off the tongue easiest.

That hurdle was surmounted, as everything else soon appeared to be in these early halcyon days of the group. Much of it happened through consumption of mind-altering substances. During business meetings, Crosby would urge his new friends to smoke highly potent weed “so we’re all on the same page.” (Additionally, their growing penchant for cocaine would earn them an industry nickname: the Frozen Noses.)

Toward the end of the recording sessions, Phil Spector came in with his dark, wordless, deeply weird presence. But really, who needed the creator of the Wall of Sound when Crosby and Nash could so easily find another studio obsessive who could drive bandmates as crazy as himself?

Stills would occupy within the group the same slot later held by Lindsay Buckingham in Fleetwood Mac: a guitar master and production wizard with a mile-wide perfectionist streak—and whose own tortured love affair would find similar memorable expression on vinyl. In Buckingham’s case, it was with the 3½-minute “Go Your Own Way”; for Stills, it was with the seven-minute “Suite: Judy Blue Eyes.”

The latter tune, the most jagged of love songs, inspired by Judy Collins, ranged widely in tone and lyrical content, yet was held magically together by songwriter Stills’ deft guitar textures in the instrumental bridges, as well as by the seamless vocal harmonies that would become one of the group’s hallmarks. The average listener wouldn’t notice the mood shifts from self-accusation (“It's getting to the point where I'm no fun anymore”) to expressions of love (“I am yours, you are mine”) to bewailing the needless frustrations created by a love (“Please be gone I'm tired of you”). The voice could be blunt and in your face (“You make it hard”) to poetic (“Lacy lilting lady/Losing love lamenting”). (Indeed, in the case of those last lines, an elementary school English teacher of mine cited it as an example of alliteration.)

It took close to forever for just that one song to come together. After 10 hours, when the tapes were played back, Stills wasn’t sure they’d gotten it. The trio went back in for another 10 hours, despite Nash’s insistence that they’d already killed it. At the end of the 20 hours, Stills agreed: the original was best.

It’s a wonder they didn’t kill him.

At other times, he rescued what seemed hopelessly mixed-up. Case in point: “Long Time Gone,” Crosby’s outraged reaction to the assassination of Robert Kennedy.  The group had been floundering when Stills told Crosby and Nash to “get a burger and go home” and let him at it. The next day, upon their return, Stills had come up with an arrangement that worked beautifully.

Crosby had an unusual--potentially deadly--method of measuring their studio progress, according to Nash's 2013 memoir Wild Tales: cutting notches in the desk next to the studio board. At one point, a teenager burst into the room and, when Crosby pointed the knife at him, grabbed it out of his hand, saying it was his knife. When Nash wondered aloud about it, Crosby smiled: "Aw, that's just my friend Jackson Browne."

Throughout, the group achieved what they had aimed for at the beginning: magical harmonies that recalled the Everly Brothers. Essential in this process was Crosby. Art Garfunkel (who knows a bit about such things) recalled it in an interview for “Croz’s” autobiography, Long Time Gone: “The middle man does the stuff that makes the chord work, but you never notice it. David can be right in front of your eyes in a sort of velvety way and you’ll never notice him.”

Unfortunately, what did get noticed about Crosby—exacerbated, no doubt, by his rampant drug use—was his brash, arrogant manner. “David was obnoxious, loud, demanding, thoughtless, full of himself,” recalled the group’s former manager (and future entertainment industry mogul), David Geffen. (That impression undoubtedly became lasting because Geffen was busted at an airport for carrying pot cross-country at the insistence of Crosby—who then had the nerve to scream at him when he showed up for their meeting without it.)

The LP Crosby, Stills and Nash sold two million copies in 1969 alone, and has been named one of Rolling Stones' 500 Greatest Albums of All Time. The addition of Neil Young later that year—and the resulting Déjà Vu album—pushed them to even greater commercial and artistic heights, paving the way for the Southern California rock of Joni Mitchell (lover, successively, of Crosby and Nash), Jackson Browne, J.D. Souther, the Eagles, Dan Fogelberg and Warren Zevon. But, if three large, often drug-fueled egos were bad enough, four represented a recipe for an explosion. First went the innocence, then the camaraderie. They had it all, then were lucky to make it out with their lives. The music was incredible, but even with the occasional get-together over the years, the pity was that there wasn't more of it.
Posted by MikeT at 11:38 PM No comments:

Quote of the Day (Joseph Conrad, on the ‘Grim Shadow of Self-Knowledge’)

“For it is my belief no man ever understands quite his own artful dodges to escape from the grim shadow of self-knowledge.”— Joseph Conrad, Lord Jim (1900)
Posted by MikeT at 7:40 AM No comments:

Quote of the Day (Henry David Thoreau, on Birds, ‘Melancholy and Contemplative’) 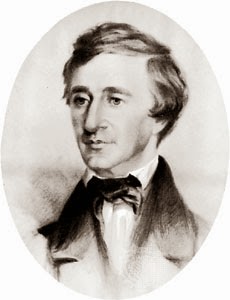 “As we shoved away from this rocky coast, before sunrise, the smaller bittern, the genius of the shore, was moping along its edge, or stood probing the mud for its food, with ever an eye on us, though so demurely at work, or else he ran along over the wet stones like a wrecker in his storm-coat, looking out for wrecks of snails and cockles. Now away he goes, with a limping flight, uncertain where he will alight, until a rod of clear sand amid the alders invites his feet; and now our steady approach compels him to seek a new retreat. It is a bird of the oldest Thalesian school, and no doubt believes in the priority of water to the other elements; the relic of a twilight antediluvian age which yet inhabits these bright American waters with us Yankees. There is something venerable in this melancholy and contemplative race of birds, which may have trodden the earth while it was yet in a slimy and imperfect state. Perchance their tracks, too, are still visible on the stones.''—Henry David Thoreau, A Week on the Concord and Merrimack Rivers (1849)

Henry David Thoreau spent 10 years writing about a boat trip he took with his beloved brother John from Concord, Mass., to Concord, N.H.—yet, when he was done with it, all he had left were mixed reviews and sales so poor that publisher James Munroe and Company of Boston eventually forced him to take back 700 copies of the original 1,000. It also drove a wedge between the author and friend Ralph Waldo Emerson, whom Thoreau believed hadn’t done enough to promote the title. Even in the eyes of posterity, A Week on the Concord and Merrimack Rivers—published on this day in 1849—has been neglected in favor of Walden and another tract published this same year, Civil Disobedience.

It deserves better. Pick up any page and you’ll find something of interest: the lush, lyrical natural descriptions, so precise, for which Thoreau is famous, such as the one quoted above; snatches from his own poetry; literary criticism (including of Chaucer); local history; and passages that ring out with epigrammatic force. ("If there is nothing new on the earth, still the traveler always has a resource in the skies. They are constantly turning a new page to view….Every man’s daylight firmament answers in his mind to the brightness of the vision in his starriest hour.”)
Posted by MikeT at 2:56 AM No comments:

I took this photograph of musicians on a recent balmy Sunday afternoon, at the entrance to Brooklyn’s Prospect Park, across from Grand Army Plaza.
Posted by MikeT at 10:02 PM No comments:

Quote of the Day (G.K. Chesterton, on Revolutions) 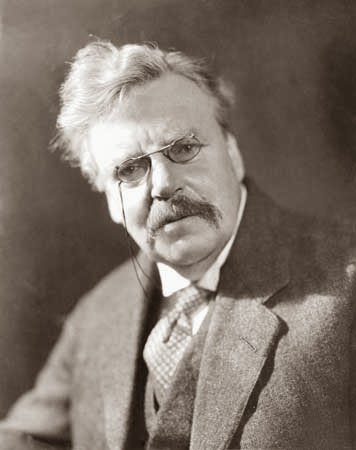 Gilbert Keith Chesterton, born on this date in 1874, was a really big guy. The way I figure it, he almost had to be, in order to take in his multiple literary guises. I first came to know this British man of letters in adolescence as the creator of the Father Brown detective stories, but in time I came to enjoy him even more as critic, novelist, poet, journalist, essayist, and, most of all, writer of Christian apologetics (and Catholic convert) whose influence in the last century might be exceeded only by C.S. Lewis.

As the above quote indicates, he was particularly the master of the playful paradox. That is the quality that informs virtually all his work, no matter the genre—and why he continues to make fans to this day.
Posted by MikeT at 2:50 AM No comments: