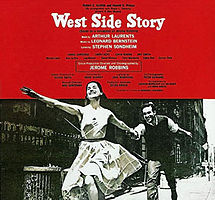 When West Side Story opened at Broadway’s Winter Garden Theater on September 26, 1957, this tale of conflict between Anglos and Puerto Ricans, transplanting Romeo and Juliet from Renaissance Verona to the mean streets of 20th-century New York, drew on several musical traditions and nourished them in turn. Yet the show’s creators were ambivalent about stressing its affinities with the most enduring form of musical theater: opera.

In a prior post, I wrote about the process by which four outsiders—composer Leonard Bernstein, lyricist Stephen Sondheim, director-choreographer Jerome Robbins, and librettist Arthur Laurents—created this musical. But West Side Story is a cultural landmark for a reason, and a second post—the one you’re about to read—doesn’t come close to exhausting the discussion of what it all means.

West Side Story certainly lends itself to jazz (listen to Dave Brubeck’s recording of “Maria”), and rock ‘n’ roll, a genre that prides itself on rebellion, has also nodded in the direction of the show (as Todd Rundgren did with his group Utopia on the mid-‘70s album, “Another Live,” with their rendition of  “Something’s Coming”).

But in thinking about all of this, my mind followed back to a whole novel on the Romeo and Juliet theme, Scott Spencer’s Endless Love, in which his love-obsessed narrator rhapsodizes to his long-lost teenage love, Jade, that he is stepping out one last time “to sing this aria, this confession, this testament without end.” And I thought of Bruce Springsteen’s magnificent “Jungleland,” which amid lyrics replete with references to the musical’s “rumble” (“The midnight gang’s assembled/And picked their rendezvous for the night”), refers to another genre: “Man, there’s an opera out on the turnpike.”

Aria…opera…Spencer and Springsteen are referring to heightened emotions, over-the-top emotions, the sense that the whole world is riding on any single moment, no matter how seemingly mundane to those outside the circle of love. The same kind of emotions contained in West Side Story.

In short, their treatment is operatic.

Observing how Stephen Sondheim's A Little Night Music and Sweeney Todd are increasingly being taken up by opera companies, cultural critic Terry Teachout has raised the question of “whether they might really have been, all along, modern operas in disguise.”

The same question might be raised, even more so, about his first Broadway hit, West Side Story. One person who raised it—and just as quickly dismissed it, perhaps fearful of where the inquiry might lead—was Sondheim’s collaborator, Leonard Bernstein. In 1949, when Bernstein and Laurents were still thinking of their lovers as a Jewish girl and Italian guy, the composer voiced a desire to make “a musical that tells a tragic story in musical comedy terms . . . never falling into the ‘operatic’ trap."

Bernstein and the other creators of the show might simply have been concerned about the association of elitism that clung to opera, as well as the big voices required by the latter form that might make audiences forget that they were watching, in essence, kids.

But Bernstein himself, as much as he loved jazz, could not resist the siren call of opera, delving into the form with Trouble in Tahiti (1952) and Candide (1956). Moreover, he took the tritone—the so-called “Devil’s Interval” spanning three whole tones—a form of dissonance used in Richard Wagner’s Gotterdammerung—to introduce an unresolved tone that will be critical throughout West Side Story.

One of the few striking plot departures between Romeo and Juliet and West Side Story is the absence of parents. This leaves the teenagers, if anything, even more uprooted than before. The tritone drives this quality home subliminally, again and again. All that tension can have only one point of release: in shocking, senseless violence that flows out of love, only to turn into hate. Or, as Friar Laurence warns in Romeo and Juliet: “These violent delights have violent ends.”

By 1985, with West Side Story well established within the repertoire of American musical theater, Bernstein felt confident enough to conduct a recording featuring famous opera stars. As with opera, this recording required more than a small suspension of disbelief. Nobody would confuse Kiri Te Kanawa, Tatiana Troyanos, Marilyn Horne or Jose Carreras as teenagers. (Nor did Kanawa and Carreras, as Maria and Tony, suggest their Puerto Rican or Anglo characters, for that matter.)

The release sparked more than a little belated hubbub about whether West Side Story was, at heart, a musical or an opera—the same question that has, in one form or another, dogged Porgy and Bess, The Most Happy Fella, and Street Scene, among others. In a way, the question may be academic. There is hardly any building given over to music, whether a theater given over to musicals or a conventional opera house, that can hold the teeming emotions given voice by West Side Story. More than half a century after its opening, it has the feel of being Bernstein’s most enduring work.
Posted by MikeT at 6:07 PM No comments: 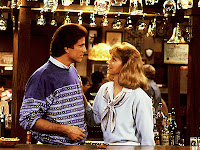 Diane Chambers (played by Shelley Long): [on the telephone for Sam] “Yes, yes, I'll take a message... You're welcome.”

[Diane hangs up the telephone]

Throughout much of the Eighties, if I ever had any down moments, I would turn on the latest episode of Cheers and banish the gloom, at least for awhile. Tomorrow marks the 30th anniversary of the premiere of one of the greatest sitcoms of them all, and just in time to tell the tale—and what a tale it is!—is Brian Raftery’s oral history in the new issue of GQ Magazine.

I use “tale,” singular, but judging by the backstage anecdotes related, I have a strong feeling that there’s plenty more where that came from—something on the order of a Hollywood One Thousand and One Nights. Many of them, predictably, involve resident wildman Woody Harrelson. (“You couldn't do what I did now because of all the tweeting and Facebooking. All the shit I did back then, I'd be hung from the rafters.”)

I don’t want to spoil the rest for you. Read the whole thing (and preferably online, which contains bits left out of the print version.) Then, when you’re done, watch the show again. Just don’t ask when they’ll ever have anything as warm and funny again on TV, because the question will only break your heart.
Posted by MikeT at 11:07 AM No comments:

Quote of the Day (Simon Schama, on Writing as a ‘Fight Against Loss’)

“[W]riting has always seemed to me a fight against loss, an instinct for replay; a resistance to the attrition of memory. To translate lived experience into a pattern of words that preserves its vitality without fixing it in literary embalming fluid; that for me has been the main thing.”—Historian Simon Schama, “Why I Write,” The Financial Times, September 15, 2012

(Photograph of Simon Schama at Strand Book Store, New York City. taken August 15, 2006, by David Shankbone)
Posted by MikeT at 2:44 AM No comments:

Quote of the Day (Proudhon, on Laws as ‘Spider Webs for the Rich’) 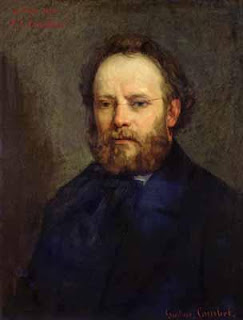 “Laws: We know what they are, and what they are worth! They are spider webs for the rich and mighty, steel chains for the poor and weak, fishing nets in the hands of government.”—French social theorist Pierre-Joseph Proudhon (1809-1865), voicing his “Authority Principle,” in No Gods, No Masters: An Anthology of Anarchism (1980), edited by Daniel Guérin, as translated by Paul Sharkey (1998)

(Portrait of Pierre-Joseph Proudhon, 1865, by Gustave Courbet)
Posted by MikeT at 2:51 AM No comments:

Labels: Anarchism, Pierre-Joseph Proudhon, Quote of the Day, The Law 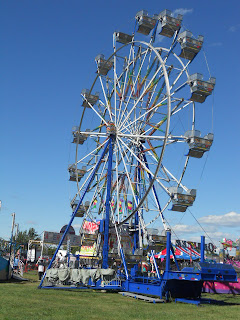 It was an optical illusion, of course, but this is how it looked to me, for a second, when I first came on the scene at an angle, at the carnival held this past weekend at Overpeck County Park in Leonia, N.J.
Posted by MikeT at 10:00 PM No comments: