Quote of the Day (Percy Bysshe Shelley, on Parasites and Power)

“Whence, thinkest thou, kings and parasites arose?
Whence that unnatural line of drones who heap
Toil and unvanquishable penury
On those who build their palaces and bring
Their daily bread?—From vice, black loathsome vice;
From rapine, madness, treachery, and wrong;
From all that genders misery, and makes
Of earth this thorny wilderness; from lust,
Revenge, and murder.” —English Romantic poet Percy Bysshe Shelley (1792-1822), Queen Mab (1813), Part III
Posted by MikeT at 5:32 PM No comments:

Quote of the Day (Frank Deford, on Echoes of Glory Days)

“[S]o many grown American men are walking around all the rest of their lives, playing those glory days over, still hearing the cheers in their inner ear. A lot of them lie about how good they were, and I think after a while, they come to believe their own lies. Some of them never get it out of their system, no matter how long they live or what they do for a living, because in this country, when you're so damn young and impressionable, it's especially exhilarating, playing for your school, with pretty cheerleaders jumping up and down and fans yelling for you. ... [A]ll your life, you might never beat that.” —Frank Deford, Over Time: My Life as a Sportswriter (2012)

Frank Deford, who passed away on Sunday at age 78, sensed that sports was more than a mere matter of box scores, but also involved matters such as physical perfection and the ache of losing it. It was evident in one of his most famous pieces, “The Boxer and the Blonde,” on heavyweight contender Billy Conn and his wife, and a novel of his adapted into a Dennis Quaid-Jessica Lange movie, Everybody’s All-American.

Standing 6 ft. 4 in. himself, with a pencil-thin moustache, Deford radiated enough charisma to be described as “the Clark Gable of sportswriting” by a onetime associate, Norman Chad. His own elegant prose embodied that combination of humor, earthiness and heart.

The long profile, the form that Deford perfected at Sports Illustrated, can feel like a relic from the pre-digital age, impossible to emulate at a point when people have little time for anything beyond a tweet.

Consider his retrospective on Johnny Unitas, “The Best There Ever Was,” which depicted how this quarterback brought pride to Baltimore and transformed the very concept of his position:

“They didn't have coaches with headphones and Polaroids and fax machines then, sitting on high, telling quarterbacks what plays to call. In those halcyon days, quarterbacks were field generals, not field lieutenants. And there was Unitas after he called a play (and probably checked off and called another play when he saw what the ruffians across the line were up to), shuffling back into the pocket, unfazed by the violent turbulence all around him, standing there in his hightops, waiting, looking, poised. I never saw war, so that is still my vision of manhood: Unitas standing courageously in the pocket, his left arm flung out in a diagonal to the upper deck, his right cocked for the business of passing, down amidst the mortals. Lock and load.”

In the middle of his career, Deford gambled by leaving his longtime perch at Sports Illustrated to become the founding editor of The National, America's first and only all-sports daily newspaper. It contained a Murderers’ Row of great sportswriters—Mike Lupica, Dave Kindred, Scott Ostler, John Feinstein—but, coming out amid an economic downturn, it flopped within two years. Nevertheless, it became the object of adoration as what sportscaster Tony Kornheiser called “the great and noble experiment of sports writing in America.”

Well into his career, Deford learned how to adapt his words for the mass media of radio and television, appearing as senior correspondent on HBO’s Real Sports With Bryant Gumbel and as a commentator on NPR’s Morning Edition. His prose became shorter and punchier without deviating from his longtime convictions, as in this explanation of how performance-enhancing drugs destroys fans’ faith in their sports:

“Visual entertainment certainly doesn't need to be real. Magicians have always performed what they frankly call ‘tricks.’ The movies now live by what are advertised as ‘special effects.’ But in sports, the bodies must be honest or what's the point? In a horrible way, concussions are good for football; they validate how seriously the bodies function in that game. You need a few matadors gored to sell bullfight tickets.

“But drugs — Lance Armstrong on the highest level, and lesser lights like Melky Cabrera and Bartolo Colon — don't just poison the game. They poison our faith.”

The passion in this passage is palpable. I strongly suspect, however, that the work that may have meant the most to Deford was Alex: The Life of a Child, his nonfiction account of the death of his first daughter, Alex, from cystic fibrosis, at age eight.

Researching this post made me want to read far more of Deford’s work. I hope these short passages will have the same effect on anyone who reads them here.

Quote of the Day (Herodotus, on Wars, Fathers and Sons) 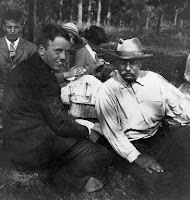 “He asked, 'Croesus, who told you to attack my land and meet me as an enemy instead of a friend?'

"The King replied, 'It was caused by your good fate and my bad fate. It was the fault of the Greek gods, who with their arrogance, encouraged me to march onto your lands. Nobody is mad enough to choose war whilst there is peace. During times of peace, the sons bury their fathers, but in war it is the fathers who send their sons to the grave.’”— Herodotus (484 B.C.-425 B.C.), The Histories, translated by A. D. Godley (1931)

I could have used a visual representation of the ancient Greek historian Herodotus with this quote, but I can think of few images more illustrative of the thousands of individual tragedies remembered on this day—than this photo of  Theodore Roosevelt and his youngest son Quentin.

Several years out of the White House, TR had pressed hard for “preparedness” in the event that America intervened in World War I on the side of Britain and France. With his hated victor in the 1912 Presidential election, Woodrow Wilson, firmly barring the door to his own leadership of a unit to fight overseas, Roosevelt looked to his sons to vindicate the family honor.

All of them distinguished themselves in the conflict, but the youngest, Quentin, only 18, was the one
that TR privately believed might be “soft.” Perhaps to overcome that perception, Quentin, who could easily have gotten out of serving because of inadequate vision, memorized the eyechart in preparation for his physical exam. He then entered an entirely new arm of the military—the Army Air Corps—and became a daredevil pilot.

On Bastille Day 1918, Lt. Quentin Roosevelt, in a dogfight in which he saved the lives of the other men in his unit, was shot down in France by a German squadron led by Hermann Goering (later, the head of Germany's Luftwaffe in WWII). In the months after his son’s death, TR took long woods in the woods near his home, only to emerge puffy-eyed from weeping. Most observers agreed that some spark went out of the old political and military warrior after Quentin’s death. His own passing came no more than six months later.

I related more details about the tale of this terrible price exacted by war on this particular prominent American family in this prior post.
Posted by MikeT at 7:16 AM No comments: 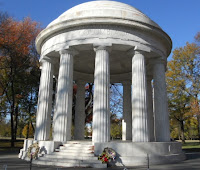 Three years ago, I came upon this local memorial to World War I by accident while walking around DC. I was in the midst that day of visiting similar tributes to our nation’s war dead in the capital—for the Vietnam, Korean and World War II conflicts.

Even though I had never heard about a similar national memorial for the Great War, I still half-expected to come across it. I never saw one—and it’s unlikely that you have, either. Although there is one in Kansas City, there is none in Washington.

Over a century ago, wars were commemorated at the local level, “rooted in place, practiced on the town square and generally modest in scale,” according to this January 2016 article by Washington Post art and architecture critic Philip Kennicott. All over the country, such a relatively modest sculpture might include a list of local boys fallen in the conflict.

Just like the wrenching conflict it recalled, the Vietnam Veterans Memorial upended all those assumptions. With that first national war memorial in place, pressure grew inexorably to commemorate “The Forgotten War,” in Korea. And, as the “Greatest Generation” began passing away in earnest, the movement to pay tribute to the heroes of World War II took on enough urgency that it was almost inevitable that a memorial for that conflict would be constructed, too.

No such demographic urgency exists for a World War I memorial; its last known veteran passed away in 2011. Nevertheless, a different kind of logic is now proving operative in this case: an educational one. With the completion of a tribute to the heroes of the Great War, the nation’s capital will have a national memorial for each 20th-century war in which a military draft required the services of a large part of America’s young.

As a result of Congressional legislation passed a few years ago, the prospective site of the memorial is Pershing Park on Pennsylvania Avenue. Though without the visibility of the National Mall, it also promises to bring the square (named, of course, for the general of all American armies in the war) a level of attention it had never achieved when it was designed in 1981 by architect M. Paul Friedberg.
'
In the meantime, curious Washington tourists will want to check out the DC War Memorial on the bandstand at West Potomac Park. Designed by noted architect Frederick H. Brooke with his associates Nathan C. Wyeth and Horace W. Peaslee—all veterans of the Great War—it was dedicated on Armistice Day 1931.

The Doric structure is 47 feet high with a diameter of 44 feet—large enough to accommodate the entire U.S. Marine Band. Following 2010 restoration funding, the memorial now gleams in something close to its original, brilliant white color, with new pathways and lighting systems to make it more visitor-friendly.

If you look along the memorial’s four-feet high circular marble platform, you’ll notice the names of the 499 DC residents who died in the war. They are inscribed in alphabetical order with no distinction made to rank, race, or gender. Although that has an obvious utilitarian function in terms of locating names, it also underscores the traditional American insistence on equality—an aspiration that even governs unto death.
Posted by MikeT at 8:19 PM No comments:

Quote of the Day (Dag Hammarskjold, on the ‘Right to Command’)

"Your position never gives you the right to command. It only imposes on you the duty of so living your life that others may receive your orders without being humiliated." — Dag Hammarskjold (1905-1961), United Nations Secretary General, in Markings, translated by Leif Sjoeberg and W.H. Auden (1965)
Posted by MikeT at 10:12 AM No comments: