In adapting a favorite short story, “The Nose,” into his first opera, Dmitri Shostakovich (pictured) may have believed that there was no way that the absurdist tale by Nikolai Gogol that had drawn unwanted scrutiny from pettifogging imperial bureaucrats would suffer the same fate at the hands of pettifogging Communist bureaucrats. But he was spectacularly wrong.

Only 16 performances after its January 18, 1930 premiere, the opera was withdrawn from circulation and would not be performed again until 1974, only a year before the composer’s death. It was the start of a decades-long campaign in which the Soviet regime alternated hailing Shostakovich as the epitome of the creative artist with harassing and humiliating him.

In a way, you can’t blame Shostakovich for finding Gogol (1809-52) irresistible. The Ukrainian-born fiction writer and playwright was notable for “his verve, his exuberance, his linguistic intensity and skill, his great density and texture, his distorted vision of a world he felt destined for hell,” according to literary critic, editor, and translator Leonard J. Kent.

Reading “The Nose” nearly a century after publication, the composer couldn’t help but be drawn to this almost Kafkaesque tale of radical transformation: a nose that, after being accidentally cut off a Russian bureaucrat by an inebriated barber, begins to parade haughtily all over St. Petersburg.

Just as the twentysomething Gogol experimented with genre in such a way that he might be considered a forerunner of magical realism, so the twentysomething Shostakovich began to put to use the modernist style in music then taking root on the Continent and even being applied by the leading composers in the USSR, including Serge Prokofiev, Aram Khachaturian, and Nicolai Myaskovsky.

In “Why The Nose?”, an explanation of his choice of this material that was distributed with the opera’s libretto, Shostakovich pointed out that Gogol’s short story satirized the era of Czar Nicholas I. Even with a justification such as this that would surely be viewed favorably by the new Soviet regime, the composer must have worried that officials inspecting his play for suspected flaws might find too much levity in the piece: “I wish to add that the music does not deliberately have the character of parody,” he wrote.

Even before its first performance, however, The Nose elicited disturbing reactions. One Soviet composer noted ominously that it had “strayed from the main road of Soviet art.” Just as devastating, it was deemed to have fallen short of the ideal of “socialist realism” beginning to cause deep dismay among Soviet artists.

As Joseph Stalin consolidated his absolute hold on power in the late 1920s, the brief opening allowed to Shostakovich and other musicians, artists, and writers under Lenin’s cultural commissar, the theater-loving Anatoly Lunarcharksy, closed. From now on, art could not depict, with any honesty, the eternal problems facing ordinary men and women. Instead, the intent of art would be nothing more or less than the exaltation of a new man, the Soviet worker, and the new Soviet state.

Despite general approval by Soviet workers that the state was ostensibly trying to serve, The Nose caused enough of an adverse reaction that Shostakovich asked that it be withdrawn from circulation. Yet he was not yet done with opera as a form. Four years later, he came out with Lady Macbeth of Mtsensk District, which this time achieved great success in Leningrad, Moscow and even abroad. All was looking up for him in November 1935, when he could write: “Today is the happiest day of my life: I saw and heard Stalin.”

The irony, so apparent in retrospect, about being “pleased” to meet one of the greatest world perpetrators of terror and mass murder only deepens when one learns what happened a mere two months after the composer wrote that. The Soviet dictator was so displeased by a performance  of Lady Macbeth that he stalked out after the first act, incensed by what he regarded, in an eerie echo of the Nazi regime’s attitude toward modern art, as its “degenerate” nature.

Stalin’s subsequent edict on Soviet opera, issued shortly afterward, pointed composers and musicians even more emphatically in a state-sanctioned direction:  opera must have a socialist theme; it had to be based on Russian folksongs and avoid dissonance; and it needed a happy ending.

Even more decisively than with The Nose, Soviet commentators rushed to please their critic-in-chief by denouncing Shostakovich. As classical music blogger Boris Giltburg has pointed out, after more than 170 performances of the piece in Moscow and Leningrad, the regime’s newspaper, Pravda, blasted Lady Macbeth for its “deliberate dissonance,” “confused stream of sound,” and “the coarsest kind of naturalism.” Nobody could have believed that the anonymous editorial did not take its cue from Stalin’s walkout a mere two days before.

The implications of official disapproval of the composer were potentially far-ranging: loss of his job, performance venues, music publishers, home, car, dacha—and even freedom, if he were jailed.

In his account of the Hollywood blacklists of the 1950s, Naming Names, Victor Navasky labeled Congressional hearings that featured the testimony of informers “degradation ceremonies.” But the term might be even more appropriately applied to meetings involving the creative class in the Stalinist U.S.S.R.

Victor Seroff’s 1943 biography of the composer notes that even Ivan Sollertinsky, the composer’s best friend, reversed his earlier praise of The Nose, while linking Shostakovich with the already out-of-favor director-producer-actor Vsevolod Meyerhold. (The ploy didn’t work: Meyerhold was executed in 1940 on spurious espionage charges, and while Soviet media claimed in 1944 that Sollertinsky died of heart disease, rumors circulated that he was murdered on orders of the NKVD, the Soviet secret police.)

Shostakovich retreated. He got back into Stalin’s good graces in 1937 with his Fifth Symphony, and during World War II provided visual support of the regime by posing as a firefighter protecting the homeland. But he never wrote another opera. He—and others in the creative class—had absorbed the government’s lesson, noted critic Harold C. Schonberg: “Even the best composers of the Soviet Union — Prokofiev and Shostakovich — were reduced to turning out pallid and uncontroversial scores of artistic inconsequence—the musical equivalent of the agriculture paintings that the artists were turning out.”

While the demise of Stalin in 1953 led to a gradual warming toward Shostakovich, he continued to tack and shift with each change in his masters. In 1973, two years before his death, he dismayed Soviet dissidents by joining with 11 other composers and musicologists in denouncing Andrei D. Sakharov.

In his epic 2003 history, The Lives and Times of the Great Composers, Michael Steen framed the debate about Shostakovich that has raged in the West ever since the composer turned his admiration of Gogol into art: “Was he just a puppet swinging on a string, whose limbs had to be supple, or else he would be put in the rubbish bin? Or was a member of the cast, a supporting actor who knew that his survival required him to play to perfection the part to which he was assigned?”
Posted by MikeT at 11:41 PM No comments:

Bonus Quote of the Day (Daniel P. Horan, on the Continued Relevance of Thomas Merton) 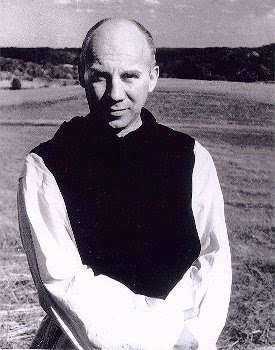 “[Thomas] Merton’s writings are having an impact in a variety of locations and among diverse populations. There are currently 43 local chapters of the Merton Society and more continue to spring up, especially in Europe. But perhaps the most unexpected chapter is the one in the Massachusetts Correctional Institution in Shirley, Mass. Founded in 2013 by the retired educator and Merton enthusiast John Collins, the chapter is an outgrowth of a talk he gave about Merton at the inmates’ request. In an interview with The National Catholic Reporter, several of the incarcerated men—some who have been in prison for decades—spoke about the significance of reading Merton. Joseph Labriola recalled being in solitary confinement, discovering a copy of Merton’s New Seeds of Contemplation in his cell and reading out his cell’s window to other convicts. One prisoner, Timothy Muise, said that the Merton group ‘affords men the opportunity to change, to re-evaluate their life in God’s light.’”— Daniel P. Horan, “Merton (Still) Matters: How the Trappist Monk and Author Speaks to Millennials,” America, Jan. 19-26, 2015

Thomas Merton, author of one of the great spiritual memoirs, The Seven-Storey Mountain, would have been 100 today. I have written several prior posts on him, including on his vivid memories of his (and my) alma mater, Columbia University; his relationship to the series Mad Men, and the controversial nature of his death in 1968.
Posted by MikeT at 8:19 PM No comments:

Quote of the Day (E.J. Dionne, on the Old and New Culture War) 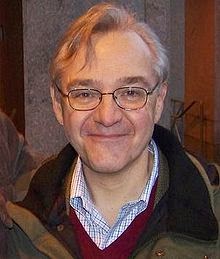 “The new culture war… is about national identity rather than religion and ‘transcendent authority.’ It focuses on which groups the United States will formally admit to residence and citizenship. It asks the same question as the old culture war: ‘Who are we?’ But the earlier query was primarily about how we define ourselves morally. The new question is about how we define ourselves ethnically, racially and linguistically. It is, in truth, one of the oldest questions in our history, going back to our earliest immigration battles of the 1840s and 1850s.”— E.J. Dionne, “Culture Wars, Old and New,” The Washington Post, January 26, 2015
Posted by MikeT at 11:15 AM No comments: 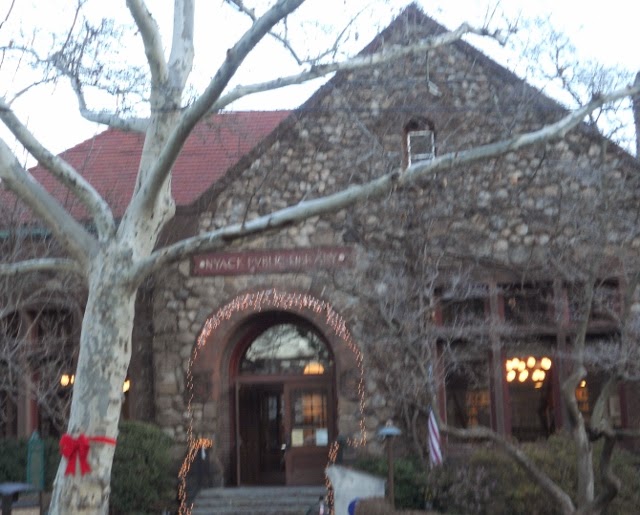 I took this photo in late December, when I was walking around in Nyack, an upstate New York village on the west side of the Tappan Zee Bridge, notable for its Victorian homes. But one should not forget its library, either. I know I don’t.

I like the Nyack Public Library at least partly for the same reason that I like the village: its charming architecture. While the library began serving patrons back in 1879, this cobblestone building at the corner of South Broadway and Depew dates to 1903, when it was constructed with funds from Andrew Carnegie. Like most structures resulting from his largesse (1,600 built in 46 states), it is modest but built to endure.

Even though I’m from northern New Jersey, I make it a point to stop in to visit this library whenever I’m in the area. Like other libraries these days, it is high tech, but the physical appeal of this vintage building remains undeniable.
Posted by MikeT at 9:59 PM No comments:

Quote of the Day (Wil Shriner, on His Experience With an Exterminator) 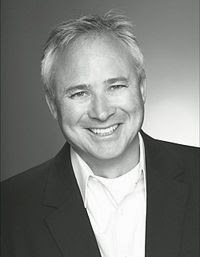 "I called a discount exterminator. The guy came by with a rolled-up magazine."—Actor-comedian-game-show host Wil Shriner, quoted in Duncan Strauss, “O.C. Comedy Review: Will the Real Wil Please Stand Up?”, Los Angeles Times, October 26, 1989
Posted by MikeT at 2:38 AM No comments: