TV Quote of the Day (‘All in the Family,’ As Archie Shows the Need to Brush Up on Shakespeare—and Geography)

Archie Bunker [played by Carroll O'Connor] (scowling): “Something is stinko in the city of Denmark.”— All in the Family, “Gloria Suspects Mike,” Season 6, Episode 10, original air date Nov. 17, 1975, teleplay by Lou Derman and Milt Josefsberg, directed by Paul Bogart
Posted by MikeT at 9:55 PM No comments:

Labels: ALL IN THE FAMILY, Malapropisms, Sitcoms, TV Quote of the Day 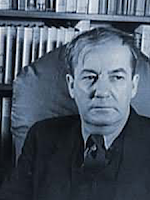 One hundred years ago this month, B.W. Huebsch published a work of fiction quickly identified as strange and beautiful in form and time. Opinions split, as they do now, on whether Winesburg, Ohio was only a set of interrelated short stories or really a novel.

But critics also hailed it for marking a new direction in American fiction, heralding a greater frankness in subject matter and a style flowing from the realistic tradition but with its own unique turn: Modernism, if you will.

These two dozen short stories by Sherwood Anderson (pictured) appeared at a moment of jarring transition in American life, one that the author alluded to in these pieces.

While clearly occurring a couple of decades after the Civil War, the incidents in the lives of these small-town residents take place at an indeterminate point before the rise of industrialization in that area of the Midwest and the start of WWI, or “the beginning of the most materialistic age in the history of the world, when wars would be fought without patriotism, when men would forget God and only pay attention to moral standards, when the will to power would replace the will to serve and beauty would be well-nigh forgotten in the terrible headlong rush of mankind toward the acquiring of possessions.”

In fact, for 1919 readers, even 1913 might have seemed an eternity ago, given all that had taken place in America since: a World War in which young men from small towns found themselves in combat overseas; the automobile increasingly replacing the horse as the principal means of getting around; and Prohibition and women’s right to vote becoming the law of the land through constitutional amendments.

Attentive readers noticed that Anderson had brought an acute new tone to American letters. The poet Hart Crane, for instance, wrote, “'America should read this book on her knees. It constitutes an important chapter in the Bible of her consciousness."

Over the years, Anderson’s idea of using a set of interconnected short stories as part of a larger narrative would be employed by three American writers who would earn far more enduring fame (not to mention Nobel Literature prizes): William Faulkner (Go Down, Moses), Ernest Hemingway (In Our Time), and John Steinbeck (The Red Pony).

Winesburg is based on Anderson’s hometown, Clyde, Ohio—whose residents, after the book was published, tried to disassociate themselves from what they regarded as scandalous subject matter.

In a recent retrospective in The New York Times, Bruce Falconer, senior editor of The American Scholar, depicted what must have been especially galling to Anderson: “The town’s head librarian burned copies of his book, and for many years, any patron of the Clyde Public Library who requested it was met with a scowl as she fumbled for the key to a locked closet where she stored, together with other ‘bad books,’ a single copy that had somehow escaped the flames.

They weren’t up in arms over a too-close identification between fictional characters and real-life originals, as the hometowns of Thomas Wolfe and John O’Hara would be with, respectively, Look Homeward, Angel and Appointment in Samarra. Instead, they were affronted by the aimlessness, alienation, and dysfunction that Anderson depicted in this prototypical small town.

While never explicit, in the manner of D.H. Lawrence or Henry Miller, Anderson illuminated characters variously gripped by sexual repression, frustration, perversion and misunderstanding, including:

*Wing Biddlebaum, a schoolteacher forced to flee another town and live under an assumed name after his expressions of affection are mistaken as sexual advances on a student (the story “Hands”);

*Rev. Curtis Hartman, who glimpses a woman “lying white and quiet in bed,” smoking, and wrestles unsuccessfully with his desire (“The Strength of God”);

*Alice Hindman, a dry-goods store clerk who, possessing a “passionate restlessness” and aware of the loss of her beauty, feels “full of youth and courage” as she impulsively decides to run through the streets one rain-drenched night (“Adventure”);

*Kate Swift, a 30-year-old unmarried schoolteacher who, in speaking to former student George Willard, almost initiates an affair with him (“The Teacher”).

For all their loneliness, these characters are unable to communicate their desires, which become twisted into obsessions that only worsen their misery. The only solution is to move away, as George Willard does at the end of the book.

In some respects, certain characters resemble Anderson or members of his family.

*George Willard, a reporter in whom the subjects of the tales confide, is often assumed to be a stand-in for the author;

*Elizabeth Willard, George’s mother, finds herself in an unhappy marriage and dies when her son is 18—circumstances much like Sherwood’s mother, Emma Anderson; and,

*Enoch Robinson, who leaves Winesburg only to see his hopes for success in a big city come to naught, is much like Sherwood’s brother Earl, who had moved to Chicago, taken a job as a restaurant cashier, then turned up 13 years later in New York, having suffered a disabling stroke.

In 1934, Anderson worked on a play adaptation of his story collection. But I don’t think that even he could have anticipated that someday, it would be turned into a musical.

Yet that’s what happened in 2003, when Chicago’s Steppenwolf Theater Company set it to music in a tight, 75-minute format. A year later, after receiving much interest in that production, the company expanded it into a full-blown musical featuring more songs, conceived by Jessica Thebus and adapted with lyrics by Eric Rosen, as well as being composed and with additional lyrics by André J. Pluess and Ben Sussman.

Subsequent productions took place at Philadelphia’s Arden Theatre Company (where I saw it in the fall of 2005) and Kansas City (where it opened in 2009). The music evoked the folk style that Anderson would have heard early in the 20th century, complete with fiddle, mandolin and banjo.

The man who created this enduring work of fiction was hardly an overnight success story. Only six years before, following a nervous breakdown, Anderson—the owner of a paint factory in Elyria, Ohio—took up in earnest the avocation he had pursued outside his business, short story writing, leaving his wife and family for Chicago.

It was like an American literary version of a novel by W. Somerset Maugham that he came to admire: The Moon and Sixpence. (See my discussion of that title—which appeared in Britain only a month before Winesburg, Ohio—here.)

Anderson was only able to maintain his high level of achievement for only about a decade. But his contribution to American literature is permanent: writing with deep acuity and sympathy of the lives of ordinary men and women.
Posted by MikeT at 9:47 PM No comments: 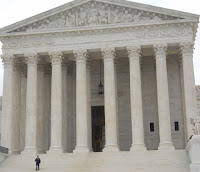 “There is virtually no political question in the United States that does not sooner or later resolve itself into a judicial question. Hence the parties in their daily polemics find themselves obliged to borrow the ideas and language of the courts.”—French diplomat, political scientist, historian, and observer of America Alexis de Tocqueville (1805-1859), Democracy in America, translated by Arthur Goldhammer (1835)

As true as Tocqueville’s words were at the time he wrote them, they are even more valid today. Back in 1835, there were only 24 states in the Union whose claims needed to be adjudicated, not 50; the U.S. was still a rural (not industrial, let alone post-industrial) society with comparatively few complications; the New Deal had not established the executive branch as having inescapable responsibility for the economy, with complex legislation and regulatory agencies to boot; and the U.S. Supreme Court had only exercised once, in Marbury v. Madison, its power of judicial review to declare legislation unconstitutional.

None of those conditions obtain today. The latest example of this reliance on courts is the abortion issue, but it is not the only example. The battle over President Trump’s multiple scandals has led to divisions between the Democratic-dominated House of Representatives and the GOP-controlled Senate, producing an inevitable face-off in the courts. More such legal struggles are sure to follow.

The effectiveness of all this grappling remains to be seen. Liberals point to the Supreme Court’s role in initiating the end of Jim Crow in the South with Brown v. the Board of Topeka, Kansas, but the success of the civil-rights movement depended crucially on securing broad public support that quickly manifested itself in countless bits of legislation.

But not all political struggles are capable of being decided, or even influenced, by the courts. For decades after Judge Arthur Garrity ordered busing to root out de facto segregation of Boston’s public schools in the 1970s, the stark black-and-white divisions evident in classrooms then only worsened.

And, as Andrew Sullivan noted in a recent New York Magazine article, while the Supreme Court’s decision on same-sex marriage has led to a decided shift in public opinion and state laws throughout the nation, the abortion debate remains frozen 46 years after Roe v. Wade. As the events of this past week showed, both sides have merely dug in their heels.

(I took the accompanying photo of the Supreme Court back in November 2015, when I was on vacation in Washington, D.C.)

Quote of the Day (Paul Johnson, on How the ‘Modern World’ Began With Einstein’s Relativity Theory) 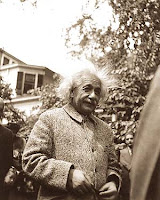 “The modern world began on 29 May 1919 when photographs of a solar eclipse, taken on the island of Principe off West Africa and at Sobral in Brazil, confirmed the truth of a new theory of the universe….

“In 1905, a 26-year-old German Jew, Albert Einstein, had published a paper which became known as the Special Theory of Relativity….

“Einstein's theory, and [Cambridge Professor Arthur] Eddington's much publicized expedition to test it [during the eclipse], aroused enormous interest throughout the world in 1919. No exercise in scientific verification, before or since, has ever attracted so many headlines or become a topic of universal conversation.”—English historian and journalist Paul Johnson, Modern Times, Revised Edition: The World from the Twenties to the Nineties (2001)
Posted by MikeT at 4:26 PM No comments: