Quote of the Day (Paul Theroux, on the Difference Between Travel and Tourism) 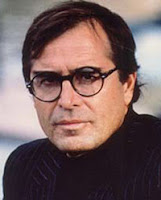 “The difference between travel and tourism: is the difference between walking in the hot sun to meet an angry person who is going to insult me and then tell me his amazing story, and lying in the sun sipping a cool drink and reading, say, Death in Venice. The first is more profitable; the second more pleasant. Both are enlightening.”—U.S. travel writer and novelist Paul Theroux quoted in Matthew Kronsberg, “20,000 Questions: Paul Theroux,” The Wall Street Journal, Sept. 26-27, 2015
Posted by MikeT at 7:29 PM No comments:

Quote of the Day (Jo Ellison, on Madonna and Other Aging Celebrities) 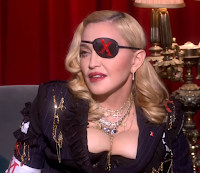 “None of us will be spared from eventual obsolescence, but while most of us only learn the extent of our irrelevance when we realise we are mentally incapable of programming the Sky box, or have become the last refusenik to subscribe to the office's new ‘collaboration hub,’ it's a far bleaker world for creatives who suffer the ignominy of age while simultaneously having fame wrested from their fingertips by younger models.”—Jo Ellison, on Madonna and other aging celebrities, in “Trending: Have You Hit the Age of Irrelevance?” The Financial Times, June 15-16, 2019

John Wayne was over 60 when he wore an eyepatch for his Oscar-winning role as Sheriff Rooster Cogburn in True Grit. I'm not sure why Madonna's wearing one at roughly the same age, except maybe to do what she's always done: acted unconventionally.

If she wanted another hit, she evidently got it, as her latest collection of tunes, Madame X (yes, you can see that letter) ranks #1 on the Billboard chart. But the musician who ranks #2, Bruce Springsteen, is almost 10 years older, and he didn't need any eyewear.

(Photo of Madonna taken by MTV International during the world premiere of her music video "Medellin" on MTV, Apr. 24, 2019.)
Posted by MikeT at 7:28 PM No comments:

Quote of the Day (Robert Penn Warren, on the Summer Love of One of ‘The King’s Men’) 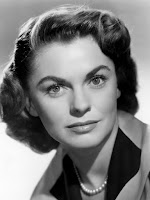 “Anne was crazy about diving that summer. She would go up high … and stand up there in the sunlight poised at the very verge. Then, when she lifted her arms, I would feel that something was about to snap in me. Then down she would fly, a beautiful swan dive, with her arms wide to emphasize her trim breasts and her narrow back arched and her long legs close and sweet together. She would come flying down in the sunlight, and as I watched her it would be as if nobody else was there. I would hold my breath till whatever was going to snap inside me snapped. Then she would knife into the water, and her twin heels would draw through the wreath of ripple and the flicker of spray, and be gone.”—American poet and novelist Robert Penn Warren (1905-1989), All the King’s Men (1946)

The 1949 screen adaptation of Robert Penn Warren’s Pulitzer Prize-winning All the King’s Men understandably stressed its narrative thrust. But passages like the above demonstrate that there was far more to the novel than that—especially the manner in which Warren’s poetic bent fueled his sense of setting and characterization.

You can understand all too well from this description why the narrator—the all-too-appropriately named Jack Burden—is besotted by Anne Stanton; why he is crushed when, dismayed by his youthful aimlessness and lack of ambition, she breaks off the relationship; and why, still unable to forget her, he is all the more devastated when he learns she is now the mistress of his boss and the man who runs the whole state, Gov. Willie Stark (a character inspired by the career of Louisiana’s Huey Long).

The languor of the season and the loveliness of the young woman at the heart of it blend inextricably in this brief but heartrending private interlude in what may still be the greatest American political novel.

I could not find a still from the film showing Anne swimming, let alone swan-diving, so I chose another image of the actress who portrayed her, Joanne Dru. In real life, she and the actor who played opposite her as Burden, John Ireland, fell in love during production of the movie and were married for eight years.)
Posted by MikeT at 8:32 PM No comments:

Quote of the Day (H.L. Mencken, With a Thought for June Brides)

“Husbands never become good; they merely become proficient.” —American editor, essayist—and cynic—H.L. Mencken (1880–1956), A Mencken Chrestomathy: His Own Selection of His Choicest Writing (1949)
Posted by MikeT at 6:06 PM No comments:

Quote of the Day (Emanuel Swedenborg, on Angels Near Us ‘Every Moment’) 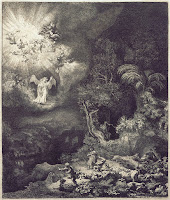 “Especially do the angels call forth the goods and truths that are with a man, and set them in opposition to the evils and falsities which the evil spirits excite. Thus the man is in the midst, and does not perceive either the evil or the good; and being in the midst, he is in freedom to turn himself either to the one or to the other. By such means do angels from the Lord lead and protect a man, and this every moment, and every moment of a moment; for if the angels were to intermit their care for a single moment, the man would be precipitated into evil from which he could never afterward be brought out. These things the angels do from the love they have from the Lord, for they perceive nothing more delightful and happy than to remove evils from a man, and lead him to heaven.”— Swedish philosopher, mystic, and scientist Emanuel Swedenborg (1688–1772), Arcana Coelestia, Volume 8, translated by John Clowes, revised and edited by John Faulkner Potts (1749-1756)

Angels are indeed with us every moment, but they’re not just the winged messengers so familiar from religious readings or artistic depictions (such as this one from Rembrandt, of an angel appearing to the shepherds). Nor are they unfamiliar beings who appear in our lives suddenly and disappear just as quickly.

No, angels are the friends and family, living and dead, who constantly lead us, by word and deed, now or remembered, to our better selves. We just have to be awake to their call.
Posted by MikeT at 8:44 AM No comments: