Quote of the Day (Mario Vargas Llosa, on the Decline in Cultural Heroes)

“Chefs and fashion designers now enjoy the prominence that before was given to scientists.”— Nobel Literature Prize laureate Mario Vargas Llosa, Notes on the Death of Culture: Essays on Spectacle and Society (2015)
Posted by MikeT at 2:52 AM No comments: 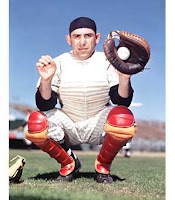 “Why has our pitching been so great? Our catcher, that’s why. He looks cumbersome but he’s quick as a cat." —New York Yankees manager Casey Stengel, quoted in Jeremy Stahl, “Yogi Berra Wasn’t Trying to Be Witty,” Slate, September, 2015

Casey Stengel, who died 40 years ago today, knew a thing or two about how a comical persona can camouflage innate baseball intelligence. One senses, then, a deep affinity between him and his catcher, Yogi Berra, who likewise bridled at the image reporters created of him—until he learned how to play them as much as they played him, in the form of humorous ads (like the Aflac commercials) in his old age..

I wish I could say my noticing the nature of this relationship was unusual, but the marvelous sportswriter Jimmy Cannon, who covered both on a daily basis in their heyday in the 1950s, beat me to it. In one of his last columns before his death in 1972, Cannon observed the difference in style between manager and player (Casey, “excitable and flamboyant”; Berra, “slow and patient”), before shrewdly outlining their similarities:

“Why are they so alike, yet so different? They are both cunning and unafraid. Neither worries much about anything. Their luck holds, too. People couldn't believe it when Stengel was originally brought to the Yankees as their manager.... He was a marvelous entertainer, but they put him down to be a minor league manager. He had no dignity. George Weiss, the great baseball man who then ran the Yankees, understood him. Stengel was sharp with a hick’s stealth which he disguised with his comedian’s routines. Berra and Stengel share the ruthlessness a manager must have. It is the acceptance that failure can’t be tolerated. Neither pampers players. Like all humorists. Stengel has a streak of cruelty in him. He can be devious and savage in his estimates of players. Innocence dilutes Berra’s appraisals, but they can hurt because his candor can be brutal. They are both secretive. But Stengel conceals a private opinion in a cascade of words; Berra merely shuts up.”

Forget all the “Yogi-isms” you read before and after his death last week; probably at least a fifth were invented, either by friends like Joe Garagiola who wanted stories for the chicken-dinner circuit, or by sportswriters who found it easier under deadline simply to invent a good story rather than to verify an existing one.

What was not invented about Berra was his place in the record books. Central to his achievement were his three Most Valuable Player Awards; the three no-hitters he caught (including Don Larsen’s perfect game, the only one ever taught in the World Series); and an unprecedented—and still unmatched--10 World Series rings won as a player.

What gets overlooked about Berra nowadays may be even more important: his field generalship. Only baseball insiders or contemporaries of his could appreciate it. In his 2009 biography, Yogi Berra: Eternal Yankee, Allen Barra observed that Yogi not only mastered the catching lessons taught by the Bronx Bombers’ brilliant retired backstop, Bill Dickey, but also that, in the wake of Joe DiMaggio’s devastating injury in the first half of 1949, Stengel had relied heavily on the 24-year-old as his stopgap RBI producer until Joltin’ Joe returned to action.

The Yankee manager became famous for his “Stengelese” potpourri of non sequiturs, doubletalk and tomfoolery, but he could speak perfectly plainly when it came to his catcher—or, as he put it, his “assistant manager.” He relied on him to pounce on bunts, “quick as a cat,” and to throw out baserunners; to indicate where players should shift on the field; to get a pitcher through a dangerous opposing lineup when he didn’t have his best stuff; and to distinguish, in a close game, when a pitcher could still get outs and when he was running out of gas.

The “Ol’ Perfessor,” who introduced “instructional school” in training camp, could react sharply if a player didn’t absorb lessons readily enough (the prodigiously talented Mickey Mantle came in for special grief at his hands). But he never had reason to complain about Berra, which he let the press know in a direct fashion highly unusual for him:

“They say Yogi Berra is funny. Well, he has a lovely wife and family, a beautiful home, money in the bank and he plays gold with millionaires. What's funny about that?"

Rest in peace, Yogi.
Posted by MikeT at 9:28 PM No comments:

Quote of the Day (Jerry Lee Lewis, on the Devil in Him) 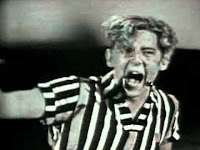 Jerry Lee Lewis was born on this date 80 years ago in Ferriday, Louisiana—within one year, in the same town as, cousins Mickey Gilley and Jimmy Swaggart. That fact probably tells you that from the start, he would be involved in a seesaw lifelong struggle between the sacred and the profane.

The women, the guns that are part of the not-so-private man of legend are all there as told to Bragg. But any consideration of him starts with this legend at the piano, as in this YouTube clip of Lewis in a live performance of  “Whole Lotta Shakin’ Going On,” where “Killer” truly had “the bull by the horns.”

Lewis is now on his farewell tour--and I, for one, can't believe that he hasn't sold out his October appearance at B.B. King's in Manhattan yet. I can't imagine he won't leave the audience something to remember him by.
Posted by MikeT at 3:04 AM No comments:

Song Lyric of the Day (Rod Stewart, on a Month Associated With a Woman) 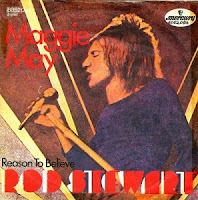 “Wake up, Maggie, I think I got something to say to you
It's late September and I really should be back at school.”— Rod Stewart and Martin Quittenton, “Maggie May,” performed by Rod Stewart from his LP, Every Picture Tells A Story (1971)

I heard this song over the weekend yet again, introduced by WFUV-FM deejay Don McGee in the simplest but most evocative fashion: “It’s late September.” A whole world was summoned for me of the first time I heard it, back as a tween.

“Maggie May” may be the second-best-known cougar in rock ‘n’ roll history, after Simon and Garfunkel’s Mrs. Robinson. The record that immortalized her was composed and produced on the fly, with all the raw heartache that Rod Stewart could summon in what has become his familiar, raspy voice. (It involved only two takes--in contrast, The Beach Boys' "Good Vibrations" and Bruce Springsteen's "Born to Run" each went through six months.) The rowdy British rock ‘n’ roller has had many hits since then, but I don’t think he’s ever been better.

The song was inspired by an incident that happened to Stewart, at age 16, at the Beaulieu Jazz Festival in the early 1960s: “I'd snuck in with some mates via an overflow sewage pipe,” he recalled in his 2012 bestseller, Rod:The Autobiography. “And there on a secluded patch of grass, I lost my not-remotely-prized virginity with an older (and larger) woman who'd come on to me very strongly in the beer tent. How much older, I can't tell you - but old enough to be highly disappointed by the brevity of the experience." (Less than half a minute, if you really must know—a rather inauspicious start for one of pop music’s most notorious lotharios.)

Sad to say, but Stewart would not, from the song that made his career, pay out more than a standard musician’s session fee to Ray Jackson, who played the mandolin on the song. In fact, Stewart rubbed salt into the wound—and probably ensured that Jackson would sue him (unsuccessfully) for songwriting credit years later—with the following tossed-off  credit on the original liner notes: “The mandolin was played by the mandolin player in Lindisfarne. The name slips my mind."

Now that I know this session player, I will, from here on forward, mentally tip my hat to this musician who provided one of the most exhilarating closing instrumentals that I have ever heard on a rock ‘n’ roll song.
Posted by MikeT at 9:39 PM No comments:

Quote of the Day (P. J. O’Rourke, on Road Hazards in the Third World)

“What would be a road hazard anyplace else, in the Third World is probably the road. There are two techniques for coping with this. One is to drive very fast so your wheels ‘get on top’ of the ruts and your car sails over the ditches, gullies and pot holes. Predictably, this will result in disaster. The other technique is to drive very slow. This will result in disaster. No matter how slowly you drive into a ten-foot hole, you’re still going to get hurt. You’ll find the locals themselves can’t make up their minds. Either they drive at 2 mph — which they do when there’s absolutely no way to get around them. Or else they drive at 100 mph — which they do coming right at you when you finally get a chance to pass the guy going 2 mph.”— P. J. O’Rourke, “Third World Driving Hits and Tips,” in Holidays in Hell: In Which Our Intrepid Reporter Travels to the World's Worst Places and Asks, "What's Funny About This" (1988)
Posted by MikeT at 3:01 AM No comments: