Quote of the Day (Ray Bradbury, on Halloween)

“The wind was a special wind this night, and the darkness took on a special feel because it was All Hallows' Eve. Everything seemed cut from soft black velvet or gold or orange velvet. Smoke panted up out of a thousand chimneys like the plumes of funeral parades. From kitchen windows drifted two pumpkin smells: gourds being cut, pies being baked.” —American novelist, short-story writer, and screenwriter Ray Bradbury (1920-2012), The Halloween Tree (1972)
Posted by MikeT at 6:51 PM No comments:

Quote of the Day (Martin Luther King, Jr., on the ‘Shackles of Prejudice’) 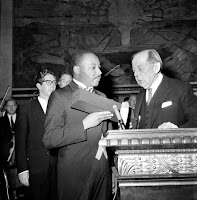 “There is little hope for us until we become toughminded enough to break loose from the shackles of prejudice, half-truths, and downright ignorance...A nation or a civilization that continues to produce softminded men purchases its own spiritual death on an installment plan.”—American civil-rights activist and Nobel Peace Prize laureate Dr. Martin Luther King, Jr. (1929-1968), Strength to Love (1963)

In memory of the 11 Pittsburgh synagogue massacre victims…Never again…
Posted by MikeT at 8:29 PM No comments:

Joke of the Day (Bonnie McFarlane, on Speaking Pig Latin) 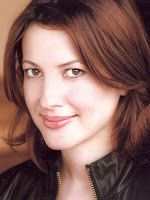 “I don’t want to brag, but I do speak pig Latin; I mean, I’m not fluent, but I’m sure if I ever went there, I could get by.” —Canadian-American comedian and writer Bonnie McFarlane quoted in “Laugh Lines: Do You Speak American?”, Reader’s Digest, July-August 2018
Posted by MikeT at 6:27 AM No comments:

Quote of the Day (Richard Rodriguez, on ‘The Paradox of the Border’ and Internal Despair) 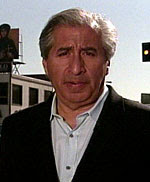 “The paradox of the border right now is that you see young people coming to the American border for the opportunity of America, at exactly the time when Americans are importing drugs from Latin America because of the despair of our unhappiness. The paradox of that movement in both directions is so interesting to me and so little noted.” —Public intellectual Richard Rodriguez quoted in Kelsey Husnick, “Tippett, Rodriguez: ‘Brown is the New Color of American Identity,’” The Chautauquan Daily, August 8, 2014
Posted by MikeT at 8:05 AM No comments:

Halloween Horror Appreciation: ‘I Am Legend,’ by Richard Matheson

I Am Legend was, of course, not the first vampire novel, nor even the first popular entertainment revolving around those other undead creatures, the zombies.

But the publication of the novel by Richard Matheson in 1954 catalyzed fears of an apocalypse gathering force in that early nuclear period. It told readers they were right to be afraid, because monsters were right outside their door.

The premise of I Am Legend is fiendishly clever: the last man on Earth holding out against vampiredom. But the source of the horror is not a Dracula-like single powerful figure, but a horde of them, as much victims themselves as victimizers. Bacteria spread in the fallout of a cataclysmic war has led to a plague, and, consequently, a need for blood.

It’s possible, then, to read this as a dystopian horror tale, as if George Orwell had written a horror tale. Like Orwell’s Winston Smith, Matheson’s Robert Neville becomes a rebel against the established order; and, feeling terribly alone, he latches onto someone who is seemingly like himself, a secret sharer—as Smith did to Julia and O’Brien in 1984.

Even while it brought apocalyptic themes to vampire fiction, Matheson’s creatures bear more than a little resemblance to the zombies that populate George Romero’s 1968 movie Night of the Living Dead as well as the current TV series The Walking Dead and Fear the Walking Dead. He is, then, a huge part of the American cultural landscape, even if many viewers are unfamiliar with his name.

Though set in the mid-to-late 1970s, roughly 20 to 25 years after its composition, the novel alludes to the by-now-distant American past. One of the avenues named here is “Cimarron Street,” as if Southern California is reverting to its Wild West origins—one that is, literally in this case, survival of the fittest.

Matheson masterfully sets the scene in the first half of the book, revealing Neville’s all-too-necessary self-sufficiency (he makes stakes and boards up his house every night, but must take extra care with his teeth, as there are no more dentists) and loneliness (he not only mourns the death of his wife and daughter, but has taken to drink to blot out the memory of killing his wife to keep her from turning into one of the undead). Likewise, Matheson sympathetically depicts Neville’s attempt to befriend and save a stray dog.

However, the novel weakens when Neville encounters a female for the first time in three years. I suppose that loneliness and the physical need for a woman are enough to make him put aside his normal suspicions, but a reader can guess where this is leading in no time. (I found it in interesting that this woman, Ruth, bears the same name as Matheson’s wife!)

Moreover, Neville’s attempt to explain the scientific sources of the horror besieging him inevitably slow down the narrative, even as it thrusts horror fiction in a new direction.

Still, Matheson’s style is lean and athletic without being schlocky, and he thinks through how the quotidian nature of human life is thoroughly upended by these apocalyptic events. And in Neville, he has created an all-too-human character—not a superhero, nor even a scientist, but an ordinary man afflicted with anguish and remorse even as he comes face to face with the existential nature of the horror that confronts him daily (“How quickly one accepts the incredible if only one sees it enough”).

One of the novel’s late, indelible scenes finds Neville in a library, alone, reading up on the biological disaster that gave rise to the howling beasts who constantly scream for his blood. Matheson pays tribute here to literature, the ultimate—and precarious—zenith of civilization:

“He stood there for a moment looking around the silent room, shaking his head slowly. All these books, he thought, the residue of a planet's intellect, the scrapings of futile minds, the leftovers, the potpourri of artifacts that had no power to save men from perishing.”

Few greater tributes to his work were offered than by Stephen King, who cited him as the great influence on his own work. That tip of the hat is especially noteworthy when one considers that Matheson (who died in 2013) was part of a celebrated group of midcentury fiction and screenwriters who made a wide impact on horror and science fiction, including Robert Bloch (Psycho), Roald Dahl, Ray Bradbury, Robert Silverberg, and Harlan Ellison.

It was a golden age made possible by two divergent but welcoming media—pulp magazines and network TV—and Matheson made his mark with sharp-eyed observations on the sterility of midcentury American culture and the fragility of human life in the atomic age, through teleplays for Rod Serling’s The Twilight Zone, Star Trek, The Night Stalker, and Steven Spielberg’s 1971 TV movie thriller, Duel, as well as short stories such as “The Creeping Terror,” a biting satire on the spread of the culture of his state, California, around the country.

Originally, I bought I Am Legend over a decade ago, in anticipation of the Will Smith adaptation about to be released. Partly because of poor reviews, I never got around to seeing the movie, nor the prior version of the novel, The Last Man on Earth, released in 1971.

Perhaps it’s just as well: for all his own skill in writing for the large and small screen, Matheson allowed readers like me, through the magic of his own words rather than images, to create horror in their own imaginations.
Posted by MikeT at 9:21 PM No comments: