TV Quote of the Day (‘Brooklyn Nine-Nine,’ on a Great Employee Sacrifice)

“Thank you for coming in on your day off. I know you'd all rather be at home binge-watching media content." —Captain Holt (played by Andre Braugher) on Brooklyn Nine-Nine, Season 1, Episode 18, “The Apartment,” air date February 25, 2014, teleplay by David Quandt, directed by Tucker Gates
Posted by MikeT at 2:36 AM No comments: 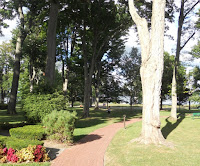 I took this photo of Miller Park, an expanse of green near the lake at Chautauqua Institution in upstate New York. I visited this National Historic Site in week six of its nine-week summer season, which concluded the other day.
Posted by MikeT at 7:38 PM No comments:

Quote of the Day (Archbishop Sheen, on the Pessimist and the Cynic) 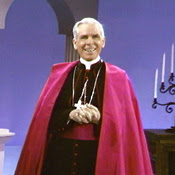 “The difference between the pessimist and the cynic is that the pessimist carries on the losing battle against life in his own soul, while the cynic tries to wage the battle in someone else's soul." —Archbishop Fulton J. Sheen, Lift Up Your Heart (1950)
Posted by MikeT at 10:43 AM No comments:

Bonus Quote of the Day (Ben Gazzara, on ‘Successful’ vs. ‘Good’ Acting) 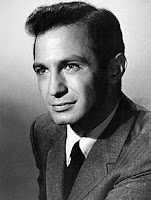 “Nothing is pleasanter than doing something successful. But successful acting isn't necessarily good acting. An actor needs success in order  to get opportunities to be good, so he concentrates on achieving success, and in the process he may lose whatever it is that has made him good. In the movies, if an actor's success comes when he is just starting, he is in danger of becoming a business expert and a tax expert. If his devotion is to how much his last movie has grossed, he is in danger of stopping, and never developing as an actor. Instead, he may just repeat what won him attention the first time. He loses the desire and the patience and the will to work at his craft, so he ceases to grow as an actor. I feel I'm a much better actor now than I was a few years ago; I find that the more I do, the more colors I can use.”—Ben Gazzara quoted in Lillian Ross and Helen Ross, The Player: A Profile of an Art (1961)

As a kid in the mid-to-late Sixties, I used to see trailers for a TV show about a forlorn-looking man in a jacket and tie, stepping out of a doctor’s office, followed immediately by a single, careening tracking shot down a highway, as if filmed from the perspective of the man behind the wheel of the invisible auto. That man in the jacket, the unseen driver of the careening car, was the protagonist of Run for Your Life. No wonder the guy looked so depressed: he’d been a successful lawyer who, having been told he had only one or two years to live, decided to go on a pell-mell search for experience. (By the way, what happened with this show demonstrated another reason why patients should get a second opinion: the show lasted three years, so the lawyer died not because of his medical condition but because of poor ratings.)

Little did I know that the actor in this inexplicable but plainly awful position for one hour each week had once been acclaimed one of the great young hopes of American stage and screen, originating the role of Brick, the drunken, haunted ex-athlete in Tennessee Williams’ Cat on a Hot Tin Roof, and Lt. Manion, an Army officer on trial for killing the man who allegedly raped his wife, in Anatomy of a Murder. A world of trouble and anguish lay barely concealed beneath their surfaces.

For making a splash in these last two roles before he had even turned 30, Ben Gazzara—whose 85th birthday would have been celebrated yesterday—had once been anointed a possible “next Brando”. It didn’t turn out that way, and he found himself taking roles in the likes of Run for Your Life to pay the rent: “I would like to be able to say that television is good training for an actor, but I don’t believe it….I accept television roles, however, because it’s necessary for an actor to keep acting—just as any man has to keep working,” he told the Ross sisters.

Gazzara managed to “keep working” for 50 years on stage, screen and TV. He might never have reached the heights of his profession as Brando, an earlier graduate of the famous Actors’ Studio run by Lee Strasberg, but he did well enough, as attested by all the directors with whom he worked over the years, including Otto Preminger, David Mamet, Peter Bogdanovich, Vincent Gallo, the Coen brothers, Todd Solondz, Spike Lee, and Lars von Trier. His appeal was aptly summed up by Bogdanovich: “You couldn't take your eyes off him. Your eyes just went to him; he had magnetism in spades.”

There’s another well-known director with whom he worked: his great friend John Cassavetes, who, with low-budget movies financed in large part by acting jobs, is generally considered the godfather of American independent film. If it’s impossible to think of that film movement without Cassavetes, it’s even harder to think of a Cassavetes film without Gazzara. They made three in the period when Cassavetes was working most feverishly: Husbands (1970), Opening Night (1977) and The Killing of a Chinese Bookie (1976). They were linked even by death, as Gazzara passed away from pancreatic cancer in 2012, 23 years to the day that Cassavetes died.

Alcohol and depression plagued Gazzara through much of his career. He seems to have gotten through it all through a great sense of humor (he was reportedly a fantastic entrepreneur), a tremendous respect for his profession (he saw Laurette Taylor's legendary performance as Amanda Wingfield in the original production of The Glass Menagerie a half dozen times) and powerful work ethic.

Quote of the Day (Isabella Rossellini, on Her ‘Adventurous’ Mom, Ingrid Bergman)

Today marks the centennial of the birth of Ingrid Bergman (in the image accompanying this post, with perhaps her most famous movie, Casablanca, with Humphrey Bogart). She was, as her daughter matter-of-factly notes above, “very adventurous”—and, to the enduring delight of cinephiles such as myself, she founded every possible way of “making art."

In her very first Hollywood picture, Intermezzo, the Swedish actress refused the urging of producer David O. Selznick that she change her German-sounding last name and fix her teeth. (Eventually, as I recounted in a prior post, Selznick realized that he could capture on film her luminous beauty by laying off the heavy makeup—and found himself credited with pioneering a trend toward “natural beauty” onscreen.) Her resistance to typecasting was braver than we can imagine now, imn an era when actresses such as Luise Rainer, Bette Davis and Olivia de Havilland had to endure suspensions, litigation and even exile to break out of the creative straitjackets imposed by the studios.

That adventurousness also threatened to end her career at its height, when an extramarital affair with director Robert Rossellini led to a hysterical outcry that might have reached the ultimate in ludicrousness when she was even denounced on the floor of the U.S. Senate as an “instrument of evil”! It took six years for the hubbub to die down and Bergman to return to Hollywood in the role that won her a second Oscar, for Anastasia.

Her work, particularly in the 1940s, can hold up with the best of any actress of her time. But Bergman ended up sacrificing much for her art and her desires, including, because of appearances on film and stage sets, time with her children. I urge you to read a fine dissection of her last film, Ingmar Bergman’s Autumn Sonata, by the exceptional blogger Farran Smith Nehme (or, as she’s known in the blogosphere, “Self-Styled Siren”), which examines how her role as a career-first concert pianist inevitably reflected aspects of her own life.

Bergman was ready to try a role in any medium--for instance, taking on the role of Joan of Arc on film, on stage, and even in an opera. As part of a collection of interviews with actors, The Player: A Profile of an Art, Bergman communicated to sister co-authors Lillian and Helen Ross that she even found television “very stimulating”:

“Television acting combines the best of the theatre and the best of movies. It is another new thing to do and to try. In making a movie, you say a line over and over, and by the time you've said it for the take, you don't remember what it is you're saying. Acting in the theatre, you have to shout, so that people up in the balcony can hear you. But when you do a television play, there are four cameras working at once, and you have both the wonderful intimacy of the screen and the live acting of the stage. In television, I know I have to be calm while everybody else is rushing around, and I love it.”

You can see what Bergman is talking about in her performance in a 1963 TV adaptation of Henrik Ibsen’s Hedda Gabler. I was lucky enough to view it several years ago at the Paley Center for Media in New York, but you can see it here now, on this YouTube clip. It might not be as widely circulated as Casablanca, For Whom the Bell Tolls, Gaslight, The Bells of St. Mary's, or Murder on the Orient Express (which won her a third Oscar). But, in taking on the female role that, in fearsome complexity, most rivals Hamlet, Bergman demonstrated again her infinite artistry as well as fearlessness. Her sense of the dramatic moment persisted to the end, as she died of breast cancer on her 67th birthday.
Posted by MikeT at 5:24 PM No comments: