Quote of the Day (Montaigne, on the Limits of His Opinions)

“I speak my mind freely on all things, even on those which perhaps exceed my capacity and which I by no means hold to be within my jurisdiction. And so the opinion I give of them is to declare the measure of my sight, not the value of things.”—Michel de Montaigne, “Of Books,” in The Complete Essays of Montaigne, translated by Donald M. Frame (1958)

What a startling admission that Michel de Montaigne, born in this date in 1533, is making here. Look, people, he is saying, sometimes I talk through my hat. Keep that in mind the next time you hear me spout off.

Obviously, this loose kind of talk would never do on certain cable news shows, whether of the right or the left, where, if you are mistaken—even if you have not the slightest shred of authority to make a claim—the trick is to yell louder. In other words, it’s worse to be quietly right than loudly wrong. (If you say loud and obnoxious things often enough, people will lose count and eventually stop caring, anyway.)

No, Montaigne would never rake in the bucks in today’s media environment. But the principle of the uncertain self that he’s confessing here created an earthquake in philosophy and, even centuries later, psychology and science (the "measure of my sight" sounds like an early portent of relativity). That same principle underlay his creation of the essay genre. Maybe by writing it all down—puzzling it out—he could begin to solidify that uncertainty.

If you want a guide to the life of Montaigne—and a good-humored explanation of why he matters—you can start with Sarah Bakewell’s How to Live: Or A Life of Montaigne in One Question and Twenty Attempts at an Answer. (French writers, I notice, inspire special kinds of such devotion. Another book along the same lines is How Proust Can Change Your Life, by Alain de Botton.)

Better yet, take one of his books down from the shelves and start reading at random. In his chapter on the great late-Renaissance Frenchman in Representative Men, Ralph Waldo Emerson labeled him “The Skeptic.” I prefer “The Charmer.” Anyone who freely owns up to the fact that he’s not always right—and tells you why—is liable to be much easier company than someone speaking at the highest decibel level while getting into your face.
Posted by MikeT at 2:44 AM No comments:

Quote of the Day (Dexter Gordon, on Life as a Jazz Expat) 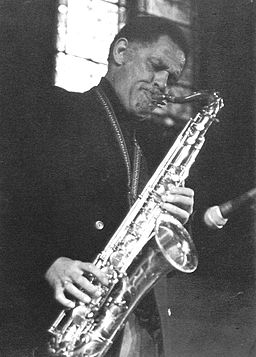 “Since I've been over here [Denmark], I've felt that I could breathe, and just be more or less a human being, without being white or black…I’ve played for months on end at the Montmartre in Copenhagen…now I've never in my life played three or four months continually at a place in the U.S. The opportunity to work regularly in the same spot gives you the kind of feeling you need to stretch out, relax, and at the same time develop musically without having those job-to-job worries hanging over your head.”—Tenor saxophonist Dexter Gordon, from an interview in Downbeat, quoted in Dan Morgenstern, Living With Jazz: A Reader, edited by Sheldon Meyer (2004)

Today would have been the 90th birthday of Dexter Gordon. Even by osmosis, he seemed linked to the world of jazz, as his father was a Los Angeles-based physician to the likes of Lionel Hampton and Duke Ellington. He was known first as a pioneer translator of the bebop style to the tenor sax, then, in his 60s, as ill health began to overcome him, as an actor, with an Oscar-nominated turn as musician Dale Turner in Round Midnight (1986).

The character might have been an amalgam of real-life prototypes Lester Young and Bud Powell, but Gordon, to an extraordinary degree, infused his own soulfulness and magnificent battered presence into the part. It wasn’t only that Turner’s struggle with substance abuse mirrored his own, but also that the tenor saxman identified with the character. After all, as the above quote makes clear, Gordon, like Turner, felt a dignity abroad that, as an African-American and working jazz musician, he could not achieve for years on his native ground.

(Photo of Dexter Gordon in Amsterdam in 1980, taken by Albert Kok.)
Posted by MikeT at 2:34 AM No comments:

Quote of the Day (Alison Pill, on Jennifer Lawrence)

“She’s just so intensely present. One of my favorite things in watching an actor is feeling, the story is safe in your hands. I can lean back and trust you with this. You can count on this girl. There’s no vanity or pretense that gets in the way of her being the character. When she’s standing somewhere, she looks like she’s standing in that place. I buy every second of it, which allows all the fantasy to come in.”—Actress Alison Pill on Jennifer Lawrence, interview by Sheila Heti, The Believer, February 2013

With all the music on the Oscar telecast the other night, one especially apropos set of notes could have been played at one certain moment: Culture Club’s “I’ll Tumble 4 Ya,” as Jennifer Lawrence lost her footing on the way up to collect her honor.

But years from now, one hopes, Lawrence will be able to surmount that mortification to remember that Hollywood in turn tumbled for her that night. (Personally, I think a more potentially dangerous moment was averted with the disappearance of Tinseltown’s Dirtiest Old Man, Jack Nicholson, following what appears to be an attempt to reenact in real life his typecast star turn as the Devil in The Witches of Eastwick.)

What her peers in the acting community, and beyond, will recall then is her deeply true and heartfelt performance in Silver Linings Playbook, a film that, because of all its risks (not all of them successfully paid off) in depicting mental illness, needed every ounce of believability she could provide it.

I can’t say that I’ll ever watch The Hunger Games or its inevitable sequels, but Lawrence’s performance in Silver Linings Playbook has convinced me that there’s enough truth in what Alison Pill says about her fellow thespian that I’ll follow as much of her other work as I can in the future.
Posted by MikeT at 9:37 PM 1 comment: 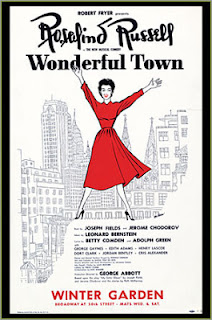 Feb. 25, 1953—Most Broadway playgoers who saw the sunny musical comedy Wonderful Town, which premiered on this date at the Winter Garden Theatre, had no idea that in actuality, the lives of its two main characters—young, single sisters out to conquer New York—had been blighted by tragedy, nor that the production they were watching had been marked by more than the usual amount of ego-tripping, backstabbing, betrayal and hysteria present in any collaborative creative production.

But don’t take my word for it—just listen to director George Abbott, a veteran of six decades of theater wars, who noted: “There was more hysterical debate, more acrimony, more tension and more screaming connected with this play than with any other show I was ever involved with."

The setting of the musical, New York in the Depression, does not sound like much fun, but Ruth McKenney spun her adventures in the big city into comic gold in the form of My Sister Eileen, a collection of sketches from The New Yorker, in 1938. At that point, success beckoned for both Ruth and the title character. Two years after the book’s appearance, Eileen had left the East Coast for Hollywood as an executive assistant to Walt Disney, and Ruth was awaiting an event that would boost her sales even further: a Broadway comedy based on the last two chapters of her book, involving life in the Greenwich Village apartment she shared with her madcap beautiful sister.

Not much seemed to go right for Ruth afterwards:

*Four days before the opening, Eileen’s husband, novelist Nathanael West (Day of the Locusts), a terrible driver, ran a stop sign. The resulting collision killed both him and Eileen. The comedy premiered as scheduled on Broadway, but Ruth understandably was in no mood to attend.

*Ruth and her husband, Richard Bransten (professional name: George Minton), both Communists, were driven out of the party--though they still had to endure the blacklisting of the McCarthy Era.

(For a fine description of the life of Ruth, see Scott Johnson's Powerline blog post here.)

The 1940 comedy, by Jerome Chodorov and Joseph Fields (brother of famed lyricist Dorothy Fields), became a big hit, then was adapted into a film two years later starring Rosalind Russell. In 1950, Chodorov and Fields approached Abbott about adapting the work into a musical, with Russell again in the role of the sharp-witted older sister of a bombshell. Despite initial misgivings, Abbott’s initial resistance was worn down, much to his later regret.

The two men called on to create the score, composer Leroy Anderson and lyricist Arnold Horwitt, worked slowly, and what they had in hand didn’t please Russell or Abott. With the start of rehearsals looming, Betty Comden and Adolph Green—a team known for working fast, and under tough taskmasters, at that (they had survived Gene Kelly in Singin’ in the Rain)—were called in. Comden and Green overcame the rather half-hearted resistance of their friend, Leonard Bernstein, to handle the music while they worked on the lyrics.

True to form, Comden and Green, with help from Bernstein, whipped several numbers together in only a month. Chodorov and Fields were furious: What had happened to their warm, rather sentimental material? (The sharply satiric songs that were Comden and Green’s stock in trade may have also reminded them a bit too much of the most highly praised bits from the 1940 show, widely rumored to have been concocted by director-playwright George S. Kaufman.) It didn’t help that Jerome Robbins, the man that Abbott called on to fix lingering problems with the show, ended up informing on Chodorov as a Communist.

Matters came to a head in the show’s out-of-town New Haven performances prior to its Broadway opening. Ingenue Edie Adams, suspecting that she would be scapegoated for the production’s failures, told the production team that it was impossible to deal with contradictory notes about her performance from so many different people. Chodorov and Fields darkly warned that without moving the show back to their original concept, it faced disaster. Russell, not trained as a singer, stressed out by the rising tension all around her, lost her voice right after the New Haven opening.

In the end, when the show got to the Winter Garden Theatre, the frothy atmosphere onstage—typified by the funny song “Ohio” and the infectious “Conga”—won over critics and audiences. The tensions between the show’s old and new creative teams were never really smoothed over, but Wonderful Town wn five Tonys (including Best Musical and, for Russell, Best Actress in a Musical), on its way to 559 performances.


A half-century after its premiere, a revival of Wonderful Town was staged. Like the original critics and audiences, I, too, was bowled over by the show’s spirit of fun and wit—testimony to the work of Comden and Green. Yet even in this case, for a show with such a problematic history, there couldn’t help but be some troubles. Donna Murphy, taking over Russell’s lead role, proved a dazzling all-purpose talent—not just acting (Russell’s forte), but also singing and dancing up a storm. But she had to take so many absences during the show’s nearly 500-performance run that, it is said, her chances for another Tony Award were badly damaged.