Spiritual Quote of the Day (Robert Murray McCheyne, on Jesus and the World, ‘One Vast Howling Wilderness’) 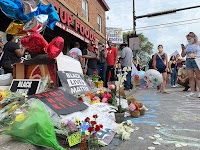 “You will never find Jesus so precious as when the world is one vast howling wilderness. Then he is like a rose blooming in the midst of the desolation, a rock rising above the storm.”— Scottish clergyman Robert Murray McCheyne (1813-1843), letter of Mar. 9, 1843, quoted in Rev. Andrew A. Bonar, Memoir and Remains of the Rev. Robert McCheyne (1844)

(The image accompanying this post was taken by Lorie Shaull on May 26, 2020, showing protesters along and around 38th Street in Minneapolis after the death of George Floyd at the hands of arresting officers the prior day. A memorial was made outside Cup Foods, where Floyd died. If America has felt like “one vast howling wilderness” since Floyd’s death, I hope we will remember Jesus’ message of nonviolent witness as the true path to change in our world.)
Posted by MikeT at 8:26 AM No comments:

Quote of the Day (Wendell Berry, on ‘When Despair for the World Grows in Me’) 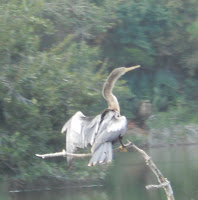 “When despair for the world grows in me
and I wake in the night at the least sound
in fear of what my life and my children's lives may be,
I go and lie down where the wood drake
rests in his beauty on the water, and the great heron feeds.
I come into the peace of wild things
who do not tax their lives with forethought
of grief. I come into the presence of still water.
And I feel above me the day-blind stars
waiting with their light. For a time
I rest in the grace of the world, and am free.”—American poet, novelist, critic, and environmentalist activist Wendell Berry, “The Peace of Wild Things,” from The Peace of Wild Things (2018)

I took this image of a blue heron in Sea Pines Forest Preserve while on vacation in Hilton Head, SC, in November 2014
Posted by MikeT at 7:12 AM No comments: 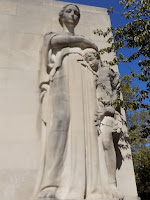 This image is a detail of a sculpture on the right side of the Brooklyn War Memorial in Cadman Plaza Park in Brooklyn. On the left side of the memorial, which I posted about 3½ years ago, is a male warrior. What you see here, bookending it, is a mother and child—what, in effect, the warrior is fighting for.

Both larger-than-life images were molded by the sculptor Charles Keck (1875–1951), who also created the statue of Fr. Francis Duffy (chaplain of New York’s famed 69th Regiment during WWI), which now anchors the theater distinct in midtown Manhattan, in the square named for the priest.
Posted by MikeT at 11:16 PM No comments:

Quote of the Day (Finley Peter Dunne, on Miracles and Wall Street)

I wish Finley Peter Dunne had tried a lighter touch in his use of dialect. Between all the exaggerated misspellings and contractions, it becomes difficult to read his pieces at any length. In the case of this quote, for instance, the auto-correct function of my word processing program kept changing what I typed so much that I finally gave up.

Maybe it did you a favor, Faithful Reader. At his best, this Chicago newspaper columnist could be among the most bitingly funny of American writers. Assessing Theodore Roosevelt’s memoir The Rough Riders, for instance, Martin Dooley, the bartender and mouthpiece for Dunne’s jibes, noted that it might have better called Alone in Cuba.  More than a few people have quoted his phrases while being blissfully unaware of the original source (e.g., “Politics ain’t beanbag” and “afflict the comfortable and comfort the afflicted”).

But the quote above really made me nod in agreement. More than a century removed from the robber barons—the fat cats that T.R. lambasted as “malefactors of great wealth”—America is still trying to make sense of Wall Street.

One American who tried but failed was H.R. Haldeman, best known to history as among the palace guard who abetted Richard Nixon in covering up Watergate—and who went to jail for the offense. As the President’s Chief of Staff and a former ad man, Haldeman had zero sympathy for anti-capitalist sentiments. But even he threw up his hands at the bipolar tendencies of The Street.

Fifty years ago this week, for instance, the nation’s weak economy, combined with growing unrest of the Vietnam War, led to a market crash, from a prior high of around 1,000 to 630. (How quaint, those numbers seem now!) Then, just the mere announcement of a dinner at the White House, in which the President and his economic advisers explained administration policy to Wall Street and industry leaders, was enough to produce a 31-point gain, the largest in history to that point.

You can practically see Haldeman shake his head as his notes in the diary he faithfully kept as Nixon’s Chief of Staff, “Really neurotic.”

And don’t even get me started on how the market has performed since the pandemic outbreak. I don’t think I understood Missouri Senator Thomas Hart Benton’s great quote in John F. Kennedy’s Profiles in Courage—“I despise the bubble popularity that is won without merit and lost without crime”—until I understood how much “bubble,” in all its irrationality, has been associated with Wall Street. Nearly two months ago, for instance, U.S. stocks rallied at the thought that the pandemic might be slowing.

You might think, as the death toll reaches 100,000, that investors might be a bit more careful this time. No such luck. With an announcement looming that U.S. jobless claims would pass 40 million, Wall Street rallied again over the belief that reopened markets would set everything right again.
Well, let’s see how that turns out, okay?

(The image accompanying this post is a cartoon, “Wall Street bubbles - Always the same," which appeared in the May 22, 1901 issue of the British satirical magazine Puck. The cartoon shows American financier J. P. Morgan as a bull, blowing soap bubbles for eager investors. Several bubbles are labeled, "Inflated values." The image is available from the United States Library of Congress's Prints and Photographs division, under the digital ID cph.3g07880)
Posted by MikeT at 4:27 AM No comments: