Quote of the Day (James Thurber, As ‘The Pet Dept.’ Discusses Hypnotizing a Bloodhound) 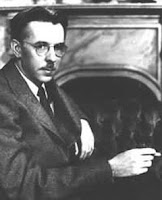 “Q. My husband, who is an amateur hypnotizer, keeps trying to get our bloodhound under his control. I contend that this is not doing the dog any good. So far he has not yielded to my husband's influence, but I am afraid that if he once got under, we couldn't get him out of it. A. A. T.

“A. Dogs are usually left cold by all phases of psychology, mental telepathy, and the like. Attempts to hypnotize this particular breed, however, are likely to be fraught with a definite menace. A bloodhound, if stared at fixedly, is liable to gain the impression that it is under suspicion, being followed, and so on. This upsets a bloodhound's life, by completely reversing its whole scheme of behavior.”—American humorist, cartoonist, and playwright James Thurber (1894-1961), “The Pet Department,” in The Owl in the Attic and Other Perplexities (1931)

Sixty years ago today, perhaps the most popular American humorist of the first half of the 20th century, James Thurber, died, a month after being stricken with a blood clot in his brain. It was a miserable end for a writer with more than his share of private torment—notably, increasing blindness, alcoholism, a thyroid condition, and orneriness that could morph into malicious mischief-making.

The quote I selected was written before the worst of Thurber’s health issues began to plague him. It reflected a lifelong affection for dogs that was in direct opposition to his cynicism about their masters: “If I have any beliefs about immortality, it is that certain dogs I have known will go to heaven, and very, very few persons.”