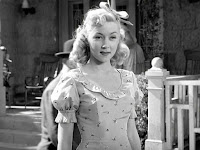 Oct. 5, 1981—In New York’s St. Vincent's Hospital, actress Gloria Grahame—far from her Hollywood zenith due to insecurity and scandal, with her body badly weakened by the cancer she had fought for years—died at age 57.

There’s a good chance that this Christmas, as well as so many others over the last half-century, millions of Americans will catch Grahame in her early eye-catching, scene-stealing role as Violet Bick, the blonde flirt who served as a foil to Donna Reed’s wholesome small-town girl as an early rival for Jimmy Stewart’s affections, in It’s a Wonderful Life.

In a way, that role would prefigure several of the film noir characters in which Grahame would shortly specialize: Crossfire, In a Lonely Place, The Big Heat, Human Desire, and Odds Against Tomorrow.

I’m thinking of the nightmare sequence in Frank Capra’s Yuletide classic, where Stewart’s George Bailey gets to see what life would have been like had he never been born. One of the many people whose life is changed for the worse, in the dark honky-tonk town now known as Pottersville, is Violet—not given a chance to start life out of town through a loan from George, but instead hauled away screaming by cops arresting her for prostitution.

Grahame was the ultimate “good-bad girl”—a woman who moved easily across, and beyond, the traditional confines of the goddess, the siren and the victim prototypes of noir. These characters’ vivacity led them to seek excitement, but as objects of the male gaze they drew trouble—whether as the anxious girlfriend of a screenwriter with an unexpected violent streak (In a Lonely Place), the lonely mistress of a racist heist participant (Odds Against Tomorrow), and, perhaps most notably, a gangster’s moll who, for defying him, suffers hideous disfigurement at his hands (The Big Heat).

While her role as the sweet southern belle who serves as the muse of her novelist husband in The Bad and the Beautiful had none of these violent overtones, it was every bit as tragic, and it helped Grahame win a Best Supporting Actress Oscar in 1952 on her second try.

The ceremony should have been Grahame’s moment to celebrate. But she was so anxious that her four-word acceptance speech (“Thank you very much”) led to whispers that she had been drunk, and her dismay at how she looked onscreen resulted in repeated plastic surgery that only subtracted from her appearance.

Far worse would engulf her by mid-decade, when she appeared in the screen adaptation of Rodgers and Hammerstein’s musical Oklahoma. In this case, her nervousness had a more solid foundation: unlike others in the case, she was not a professional singer. Her apprehension took concrete, and unwelcome, form when she struck co-star Gene Nelson on the set, virtually sealing her reputation as difficult to work with.

But her reputation took its biggest hit with the 1960 announcement of her marriage to her former stepson Anthony Ray. Anthony’s father, director Nicholas Ray and another ex-husband of Grahame’s, Cy Howard sued Grahame, suing her for custody of their respective child with her. The resulting sensational headlines reportedly led Grahame to a nervous breakdown at the most difficult passage that actresses in that time experienced: career decline at age 40.

I was surprised to find, while channel-surfing the David Janssen series The Fugitive, that Grahame had appeared in an episode. But these small-screen appearances became more characteristic of her career in the 1960s than the high-profile movies of the prior decade.

Through most of the Seventies, Grahame toiled onward, in supporting roles in theater, television, and onstage. Even in the last six years of her life, as cancer increasingly ravaged her, she bravely continued working and maintained a relationship with a younger lover, Peter Turner—a period recounted in the biopic Film Stars Don't Die in Liverpool, starring Annette Bening as the actress.

In a retrospective of Grahame’s best films on the Web site of the British Film Institute, David Parkinson aptly summarized the nature of her appeal: “With her lisping voice and sleepy eyes, Grahame… gave femme fatality a raw but touchingly vulnerable sensuality, ensuring she was always much more than just good at being bad…. At her best…, Grahame lit up the screen with her beguiling, intense presence.”