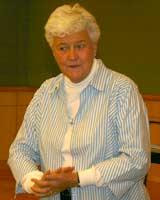 Longtime readers of this blog know of my interest in all things involving my alma mater, St. Cecilia High School in Englewood, N.J. –now, sadly, closed for more than 20 years.

Over the next few weeks, before the next Super Bowl, football fans are likely to hear an awful lot about one person connected to the school: legendary Green Bay Packers coach Vince Lombardi, who got his start in his profession through an eight-year stint coaching at Saints.

As much as Lombardi accomplished (and he’s a far more fascinating—and complex—character than the vast lore surrounding him might suggest), students and faculty associated with Saints have done far more than this understandable focus on athletics might suggest. One person who deserves far more recognition for her unrelenting efforts is Sister Peggy O’Neill, who taught at the school while my older brothers were there in the late ‘60s and early ‘70s.

In the November 12, 2008 issue of The Catholic Advocate, the weekly newspaper of the Archdiocese of Newark, a news article mentioned that Sister Peggy had won the “Peacemaker Award” of the Sisters of Saint Joseph of Peace Chapter in West Long Branch, N.J. The award came for her 21 years of work in El Salvador, honoring her specifically for her “contribution to peace making and work for justice.”

I meant to write about this honor before—first when the piece originally appeared, then on New Year’s Day—but was unable to locate the piece. Now that I have it in hand, it seems somehow just and fitting that this post appears on the 80th birthday of Dr. Martin Luther King Jr., another religiously inspired person who sought to bring peace and social justice to the downtrodden of this world.

Sister Peggy went to El Salvador in 1987, when that country was in the middle of a 12-year civil war. Death squads roamed the land, with religious communities—including, in two notorious cases, four Maryknoll nuns in 1980 and six Jesuit priests nine years later—hardly exempted. The war left an estimated 75,000 dead and a country unable to advance economically or even establish ordinary levels of stability.

Working through Centro Arte por La Paz, Sister Peggy has moved to counter this desolation and sustain life. She has put into practice, day after day, what she taught for years in her classes: the necessity of doing the work of Christ through helping others. A moving account of her ministry and the still-scarred region in which she works is contained in the following blog post, written by a religion student visiting the area this past fall.

This past week, a college friend of mine, a cradle Catholic who is now, sadly, disaffected from the Church, told me of his interest in Quakers, especially their work for peace. “If Christianity isn’t about peace, I don’t know what else it is for,” he said.

Dr. King—who said shortly before his death that he’d like to be remembered as “a drum-major for peace”—would know what my friend means. So does Sister Peggy. Lord knows that I’ve spent more than a few moments on this blog criticizing the cheats, liars and users of our society, but it’s useful to be reminded by the work of Dr. King and Sister Peggy that the basic instinct of our nature is not toward the despicable but toward the idealistic.
Posted by MikeT at 5:08 PM

Good job Mike
She is a great woman who has had a great influence on many of us who were fortunate to have had her as a teacher. (Sr. Margaret Bradley would think that awful sentence structure!)

Sr Peggy is a good friend of mine and she was just here in Michigan to burn the mortgage papers for the Center with a group who raised $73,000 for her to make the payment. I leave this Thursday for El Salvador and will be with Sr Peggy. I will tell her of your blog.