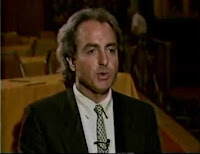 Nov. 9, 1985—Five years after Lorne Michaels (pictured) stepped away from his creation, Saturday Night Live aired its first episode back under his guiding hand, allowing the late-night staple to once again take its place among the greatest TV showcases for comic talent next to Sid Caesar’s Your Show of Shows and The Tonight Show under Johnny Carson.

Michaels’ resumption of his duties as executive producer came after the show, under its two previous heads, had been in danger of losing its reputation for irreverent skewing of American culture and politics by improv-trained comic actors, standup comics and jaundiced writers.

Expectations were high, then, on his return—probably too high to be met immediately, even with the comparative luxury of a season premiere more than a month later than in previous seasons.

Reviews for this episode (guest-hosted by Madonna, with musical guests Simple Minds) were rocky, with the opening skit (NBC executive Brandon Tartikoff stating that urine drug tests would be given to the new cast members) running into particular flak. In fact, the entire 11th season is regarded by many fans as among the worst in the show’s history.

But Michaels’ reputation was high enough that he was able to buy time, and a year later he had figured out how to right the ship.

Like a new company head coming in from outside, Michaels took the reins back at SNL after being assured he would have a free hand in choosing his team. And that meant in its entirety. Not a single cast member was retained from the prior season.

The subsequent fame of Cusack and Downey shed a retrospective glow to the 11th season that wasn’t there at the time. The new crew did not mesh particularly well right away.

Rather than cast young relative unknowns who nevertheless had worked together previously, as with the original Not Ready for Prime Time Players, Michaels preferred several members who had already made a name for themselves onscreen, such as Randy Quaid and Anthony Michael Hall. This particular change in his methods was not successful across the boa4rd.

It was a close call, but NBC was willing to give Michaels another chance, and the executive producer felt he was not at a point where he could walk away from it. Severe difficulties had resulted back in 1980 when failure to come to terms on Michaels’ contract negotiations (along with burnout) led him led to walk away from the weekend institution.

Michaels’ follow-up venture, the prime-time comedy series The New Show, failed a year and a half after his departure. Success in reviving SNL would also revive his reputation.

NBC had had it even tougher: Jean Doumanian, the show’s head for the sixth season, was axed after only 10 months on the job (in a December 2016 Hollywood Reporter interview, she cited the handicaps she was under—the need to replace an entire cast and crew that left with Michaels, along with a lower budget than her predecessor enjoyed—while detractors pointed to the nickname “Ayatollah Doumanian” as evidence that she was not cut out for the role).

Her replacement, Dick Ebersol, retained only Eddie Murphy and Joe Piscopo from her cast. Though some of the new cast members succeeded, it really was Murphy’s brilliance that almost single-handedly saved the show over the next four seasons. By 1985, tired of the brutal schedule and of retooling the show yet again (with yet another round of recasting, along with switching to mostly prerecorded segments), Ebersol and NBC called it a day.

As mentioned earlier, Michael’s initial preference in 1985 for a more recognizable cast did not represent an advance on the Ebersol regime. And, as New York Magazine’s Brian Boone noted in 2013, the rest of that season featured so many creative misfires (e.g., Francis Ford Coppola as guest host)  that only an 11th-hour plea by Michaels persuaded Tartikoff not to cancel the show for good.

But other changes that season, over the course of time, produced an upturn in the show’s favor:

* Miller re-established “Weekend Update” as a focal point for the show’s political satire;

* Al Franken returned as a writer and featured player;

* Videotaped dress rehearsals furnished Michaels with multiple options: for fixing technical issues, experimenting with different line readings, or using unaired segments when a particular sketch was judged not worthy of being rerun.

Moreover, with a complete overhaul that actually worked this time—including new cast members Dana Carvey, Phil Hartman, Jan Hooks, and Kevin Nealon—Michaels succeeded in bringing the show out of its Dark Ages and into its Renaissance. Now in its 46th season, SNL is the longest-running weekly late-night show in the history of television, and Michaels himself has become an institution, given the Presidential Medal of Freedom, the nation's highest civilian award, in 2016 by Barack Obama.