Robby Cano, Doncha Know! (About His Second Failed Drug Test, That Is) 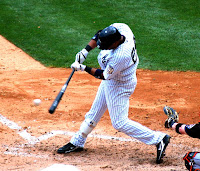 In the first half of the career of Robinson Cano, John Sterling would often let loose the home-run exclamation, “Robby Cano, doncha know!”

More than a few listeners groaned when they heard the longtime New York Yankee radio announcer unleash this and similar hosannas created for each player. But it was hard to be displeased with this particular subject.

With his smooth fielding, the sweet swing seen in the accompanying photo, and overall consistency, Cano easily sustained comparisons with Bobby Richardson and Willie Randolph, two quiet but key pillars of past Yankee championship teams. When he became a free agent after the 2013 season, he was in position not merely for a hefty salary increase but, if he remained on his trajectory at the time, for the Baseball Hall of Fame.

Fans like me had plenty of reason to lament Cano’s decision to spurn the team’s seven-year, $160-million contract offer for the Seattle Mariners’ 10 year, $240-million proposal.

These last couple of days, that gloominess appears wildly misplaced. It wasn’t only that, through seven subsequent seasons with the Mariners and New York Mets, Cano never played in a single postseason game, as he had done in all but two of his nine years with the Yankees.

No, it’s because, following a second failed drug test that this time triggers a season-long suspension, his career may be over, along with any chance of entering Cooperstown as anything more than a tourist.

It’s hard to feel sorry for a player who acted so myopically and maddeningly, in multiple ways:

*By watching what happened to Yankee teammates and friends Rodriguez and Melky Cabrera, Cano should have realized he ran a grave risk of being caught for using substances banned by major league baseball;

*When he was suspended for 80 games after testing positive in 2018 for using Furosemide, Cano said in a prepared statement that it was not a “performing-enhancing drug,” even though it has been used to mask the presence of steroids and other banned substances, and insisted that it was “given to me by a licensed doctor in the Dominican Republic to treat a medical ailment,” without naming either the physician or condition—a lame contention similar to a past President’s insistence that he “didn’t inhale” when he smoked pot;

*When he resumed his career, this time after being traded to the Mets, Cano should have known that the scrutiny he would endure in the nation’s media capital would be even more intense than before;

*With his second failed test resulting from the presence in his system of Stanozolol, the same drug leading to the suspension of Rafael Palmeiro 15 years ago, Cano ignored the lessons of history—and used a substance even easier to detect than Furosemide;

*With the increased drug testing following the 2013 Biogenesis investigation that ensnared A-Rod and Ryan Braun, Cano should have understood that his chances of avoiding discovery for a prolonged period were growing ever more limited.

In a statement released after the test results were released, Mets President Sandy Alderson could barely conceal his extreme irritation with the star once considered a cornerstone of the team’s future pennant hopes:

“We were extremely disappointed to be informed about Robinson's suspension for violating Major League Baseball's joint drug prevention and treatment program. The violation is very unfortunate for him, the organization, our fans, and the sport. The Mets fully support MLB's efforts toward eliminating performance enhancing substances from the game."

At least, by forfeiting his entire salary for 2021, Cano has given the Mets $24 million that they can use on coveted free agents—and the ability to place Jeff McNeill, a player 10 years younger than the veteran, into his natural position at second base.

(In a blog post for station NBC Chicago, Gordon Wittenmyer can barely restrain himself in considering how this Cano-generated maneuvering might lead to an intense round of calls between the Mets and a Cubs team seeking to offload expensive contracts.)

Cano has also given Bronx Bomber fans two things: gratitude, with Thanksgiving only a week away, that Brian Cashman didn’t make Cano an A-Rod-style albatross with a decade-long contract seven years ago, and  the freedom to speculate about the Yankee GM's reluctance to offer a more whopping salary because of Cano’s rumored source for his prodigious power numbers.

(Cashman’s 2018 disclaimer to USA Today reporters Pete Caldera and Steve Gardner that he would have been “compelled to tell'' major league baseball about Cano’s PED use, or incur a fine in excess of $1 million and possible loss of his job, does not resolve that question, given the GM’s carefully worded follow-up: "Knowledge is one thing, suspicion is another.'')

As for Cano, his acceptance of responsibility for “everything that goes into my body” comes too late for a player whose career statistics—including a .303 batting average, 334 home runs and 2,624 hits—would have made him a near-certainty for eventual enshrinement in the Hall of Fame. I guess maybe he’s banking on the short memory of Cooperstown voters, just as he once believed he could evade tougher drug-testing regimens for as long as it took.

(The accompanying photo of Robinson Cano, then playing for the New York Yankees, was taken on May 17, 2008, originally posted to Flickr as "DSC_0049"and cropped by UCinternational.)