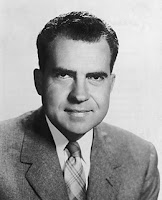 Nov. 7, 1950—Congressman Richard Nixon gutted out victory in his campaign for an open U.S. Senate seat in California, adding to his influence within the national Republican Party. But it came with a price that lasted till the end of his life: the “Tricky Dick” nickname bestowed by Democratic opponent Helen Gahagan Douglas.

The ambitious 37-year-old, two-term Congressman, as he had done in four prior years in public life, infuriated liberals with his take-no-prisoners campaign, which represented some of the darkest moments in the history of American politics.

But the story behind the campaign was, like Nixon himself, more interesting and more complicated than the two-dimensional version seen by Nixon’s friends and foes throughout his three-decade career.

Given the growing importance of California in national politics in the postwar era, whoever emerged as the winner in the contest was bound to become a star with the electorate. But Ms. Douglas—like Nixon, bored with life as a junior member of the House of Representatives—had already been a real star before her run for public office.

The wife of actor Melvyn Douglas, she began as a stage actress in New York, where her appearance attracted the kind of notice that most performers would kill for, from Heywood Broun: that she was "ten of the twelve most beautiful women in the world.” After an intensive period of study, she then switched to opera singing Europe. Later, she went with Melvyn out to Hollywood, finding new exposure to the public on film and radio—but not before the shock of seeing ordinary Americans struggling with the impact of the Great Depression triggered an impulse towards activism that would last through the end of her life.

Douglas’ high-profile advocacy of the New Deal made her a favorite of Franklin and Eleanor Roosevelt, who encouraged her to run for public office. On Capitol Hill starting in 1945, she found an additional mentor—and lover—in rising Texas Congressman Lyndon Johnson.

More interested in spotlighting issues than in the drudgery of committee work or ascending the long ladder of seniority in the House, the charismatic Douglas had her eyes on higher office within a few years. Her passion for liberal causes and glamour led some to see her as a potential future Vice-President. But her next objective turned out to be the Senate seat that opened when incumbent Democrat Sheridan Downey, citing ill health—and facing a primary challenge from Douglas— declined to seek reelection.

But securing that slot, in a state with districts far more conservative than the one she represented, was going to be harder for Douglas to accomplish—and even more so facing a Republican opponent like Nixon.

Unlike Douglas, Nixon had acted deferentially to party elders. The Alger Hiss case on which he built his reputation as an anti-communist was better substantiated than the endless array of reckless charges in which Senator Joseph McCarthy was already engaged. Adlai Stevenson’s later description—"McCarthy with a white collar"—was apt.

But he had also established that he was a gut-puncher who would hit below the belt in his first successful run for office right after the war ended against Jerry Voorhis. During debates, he associated the congressman—who had, six years previously, sponsored legislation requiring registration by groups controlled by foreign governments—with subversives, and not so subtly suggested the same thing by documenting Voorhis' voting record on pink paper.

Douglas made the mistake of a preemptive strike on Nixon in late June 1950, charging that he had voted with New York Congressman Vito Marcantonio, of the leftist American Labor Party, in denying aid to South Korea and cutting assistance to Europe in half. Nixon could credibly say that this claim distorted the rationale and history behind these votes, while opening Douglas up to a devastating—and far more unscrupulous—series of counterpunches by her opponent.

Hearing one stump speech by the Republican, a Douglas supporter had warned the congresswoman that he could be a “cagey” strategist, and Mrs. Roosevelt cautioned Douglas that the Pink Sheets should be rebutted strongly and immediately. But Douglas underestimated the pamphlets and their perpetrator, regarding the whole thing as “ridiculous, absolutely absurd.” She paid dearly for that.

Nixon might righteously disclaim responsibility for the excesses of some of his supporters, but he could not plausibly deny his own anti-Semitism. Nixon’s aides discovered that the half-Jewish Melvyn Douglas had changed his surname from “Hesselberg” in the late 1920s at the suggestion of a producer. On the stump, Nixon took to referring to his opponent as “Mrs. Hesselberg” before smilingly correcting his “slip.”

Unlike Hillary Clinton in her campaign against Donald Trump, Douglas could not be credibly charged as opportunistic—even Nixon biographer Conrad Black recognized her strength as “a sincere and attractive woman fighting bravely for principles most Americans would agree with if they were packaged correctly.” But she faced an even more uphill battle than Clinton would in battling gender denigration.

The dislike of her by Nixon supporters was expressed not just verbally but physically: pelting with stones, spitting, dousing with hay, splattering with raw eggs, and rock throwing by children. Reporters noted that Douglas—who, only the year before, had been praised for keeping her figure—had now taken to eating candy bars that added 10 pounds onto her frame. The same stress from the campaign led to longer speeches that strained her voice and made her sound shrill. Los Angeles Times political columnist Kyle Palmer frequently called her “emotional.” And it was all capped by the most revolting remark of Nixon’s in the entire campaign: "She's pink right down to her underwear."

Other factors added to Douglas’ woes:

*Leftover bitterness from the primary: Downey and Boddy had intensely criticized Douglas, who had done little to reconcile with them afterward. The lingering resentment became manifest in September, when 64 leading Democrats endorsed Nixon over Douglas. (Other Democrats were more surreptitious, with Jack Kennedy coming to Nixon’s office with a contribution from the Massachusetts Congressman’s father, who loathed Douglas.)

*Spillover effects from national and other state races: Harry Truman, still smarting over James Roosevelt’s attempt to draft Dwight Eisenhower as a Democratic Presidential candidate in 1948, refused to stump in California when the son of Franklin and Eleanor ran for governor two years later. Douglas became collateral damage from that decision, even though the President had encouraged supporters of her primary rivals to support her in the fall.

*The Roman Catholic Church: While Catholic union leaders largely backed Douglas, the rank and file were less inclined to do so. They may have been heavily influenced by Archbishop James Francis McIntyre’s decision to order sermons throughout the Archdiocese of Los Angeles the month before the election that, while not specifically mentioning Nixon or Douglas, preached anti-communism and communist infiltration in the government. As parishioners left Mass, Nixon campaign operatives were waiting outside, ready to distribute the anti-Douglas “pink sheets.”

*Douglas’ ineffectiveness at close range: Nixon and Douglas met twice face to face, with the Democrat battered each time. She did not reckon with her opponent’s ability not just to distort her record but to unnerve her. Once, he looked at his watch, grinning, as she arrived late for a Beverly Hills joint appearance. Another time, he announced that he had a check from “Eleanor Roosevelt,” so nettling Douglas at the suggestion that the former First Lady had donated to Nixon that she did not even recover her equilibrium when the joking Nixon explained that this “Eleanor Roosevelt” was in fact the widow of Theodore Roosevelt Jr.

*Douglas’ alienation of opposition groups: If Hillary Clinton sparked a hornet’s nest by calling Trump supporters a “basket of deplorables,” Douglas exhibited similar tone-deafness by calling Nixon’s “brownshirts.” That was not bound to endear her with conservative male voters who had fought in the war against Fascism and had their own varying reasons for supporting Nixon.

With all these factors against her, it should not have been surprising that Douglas lost by a nearly 3-2 margin to Nixon. In the wake of her loss, she decided not to seek public office again. She resumed acting and concentrated more on her family.

Yet two decades later, Douglas had the satisfaction of living long enough to see "Don't blame me, I voted for Helen Gahagan Douglas" proliferating on California bumper sticks at the height of the Watergate scandal that drove “Tricky Dick” from public office for good.