Quote of the Day (Mark Twain, With the Enduring Hope of American Con Men) 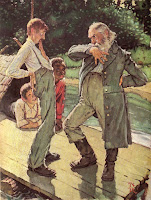 "Hain't we got all the fools in town on our side? And ain't that a big enough majority in any town?"—American novelist and humorist Mark Twain (1835-1910), Adventures of Huckleberry Finn (1885)

Like few other American writers, Mark Twain understood how susceptible Americans are to greed and cruelty. In his “Duke and the Dauphin” chapters from Adventures of Huckleberry Finn, he satirized the con men who went the length and breadth of the American heartland, along the mighty Mississippi, looking for easy marks.

The “Dauphin” (i.e., the Bourbon claimant—false, in this case—to the French throne) who states the above has been amply justified to believe that their latest con will work. What he doesn’t reckon with is the countervailing American propensity towards violence—evidenced in Huck’s abuse at the hands of his drunken father, the long-running Grangerford-Shepherdson feud, and the system of slavery that endangers Huck’s friend Jim.

No matter people’s capacity for self-delusion, they are frightening to behold when fleeced of their money. When one set of townspeople realize this, they administer summary judgement, sending the two grifters, “astraddle of a rail,” tarred and feathered.

In 21st-century America as much as the antebellum era that Twain wrote about, con artists, whether phone scammers, businessmen, politicians, or businessmen-turned-politicians, continue to prey, only more broadly and with greater sophistication. That does not mean that vengeance, when it comes, will not be as terrible as it was in Twain’s time.

(The image of the Duke and Dauphin accompanying this post is one of Norman Rockwell’s illustrations for the Heritage Club’s edition of Adventures of Huckleberry Finn.)