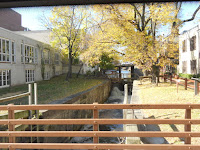 I took this photo from a tour bus while vacationing seven years ago this month in Washington, DC. This portion of the Chesapeake and Ohio Canal National Historic Park is in the Georgetown section of our nation’s capital.

Construction of the Chesapeake and Ohio began in 1828, only three years after the wild success of the Erie Canal sparked serious interest in what we now call “infrastructure” in the United States. It was not finished until 1850. At its height in the early 1870s, more than 500 boats were in frequent operation on the canal.

Thereafter, a series of blows—floods, a depression, and competition from the Baltimore and Ohio Railroad—undermined the canal’s effectiveness and business. No repairs were made following yet another flood in 1924, and 14 years later the canal was sold to the U.S. government and placed under the National Park Service.

Unlike most canals built in the 1800s, the canal remains virtually unbroken for its entire 185-mile length, from Rock Creek Park into Maryland. It is a picturesque reminder of an important era in the nation’s commerce.