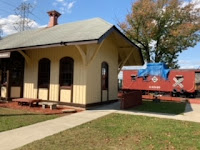 I took this photo a month ago while passing through Mahwah, at the northern edge of Bergen County, NJ. Because it was a Sunday, these structures were closed. But, because I have been interested in the significance of railroads in developing America, I paid attention to the sign on the property and read about how the site has been maintained for posterity.

Constructed in 1871, this building served as the original station on the Erie Railroad in Mahwah until the early 1900s, when the Erie expanded to four tracks and raised the roadbed from the ground level.. After being used for different purposes, it was saved from the wrecking ball by the Winters family of Mahwah and later by the Mahwah Historical Society.

Railroad memorabilia collectors have contributed numerous artifacts to this museum, including a 1929 Erie cupola caboose (which features displays about the men who worked the line, and their role in the railroad, and their living conditions), a scale model of the Erie system, and photos of the origins of railroading in Mahwah.