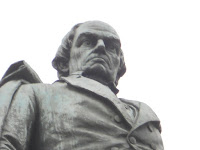 When I visited Washington in November 2013, I didn’t have to look at the base of this standing bronze statue at Bataan Street NW that I photographed to know that it depicted the great American orator and Union advocate Daniel Webster.

It wasn’t only in the great sweep of the folds of his clothing captured by sculptor Gaetano Trentanove, but the details of the craggy face that I’ve focused on in this closeup: the penetrating eyes and fierce demeanor that froze listeners in their place even before he uttered a single word.

One of the bronze relief panels on the granite pedestal shows the audience in the speech for which he is best known, the 1830 “Reply to Hayne” that included these words once memorized by countless American schoolchildren: “Liberty and Union, now and forever, one and inseparable!”

Despite his faults (a fondness for liquor, a too-close financial attachment to the Second Bank of the United States), Webster was a more towering figure in the life of the nation than even many Presidents. In a way, I wish some author would write an extended essay/short biography titled, Why Webster Still Matters.

If pressed, I would start by saying his career offers an example to Americans of our time of how what Senators say and do can make a difference in the life of the nation—if only Senator do not engage in gridlock and senseless posturing.

But equally important, I would point to his remarkable recognition in a June 1, 1837 address in Madison, Ind., of where damage to our country might come from:

“I apprehend no danger to our country from a foreign foe…. Our destruction, should it come at all, will be from another quarter. From the inattention of the people to the concerns of their government, from their carelessness and negligence, I must confess that I do apprehend some danger. I fear that they may place too implicit a confidence in their public servants, and fail properly to scrutinize their conduct; that in this way they may be made the dupes of designing men, and become the instruments of their own undoing.”