Quote of the Day (Thomas Babington Macaulay, on King Charles I) 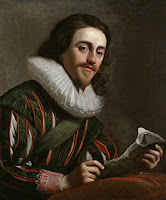 “Charles [I] bore no resemblance to his father [King James I of England]. He was not a driveller, or a pedant, or a buffoon, or a coward. It would be absurd to deny that he was a scholar and a gentleman, a man of exquisite taste in the fine arts, a man of strict morals in private life.

“His talents for business were respectable; his demeanour was kingly. But he was false, imperious, obstinate, narrow-minded, ignorant of the temper of his people, unobservant of the signs of his times. The whole principle of his government was resistance to public opinion; nor did he make any real concession to that opinion till it mattered not whether he resisted or conceded, till the nation which had long ceased to love him or to trust him, had at last ceased to fear him.”—English historian and essayist Thomas Babington Macaulay (1800-1859), The History of England from 1485 to 1685 (1987)

Over the years, I have had my issues with the smugness of Thomas Babington Macaulay, but when it comes to King Charles I –born on this day in 1600 in Dunfermline Palace, Fife, Scotland—his conclusions seem indisputable.

Charles did not commit any offenses not done by either his father or, for that matter, any of the Tudors. But he was fatally insensitive to how his kingdom was changing and how much he was alienating a significant proportion of his subjects. That blindness led to the English Civil War, defeat at the hands of Oliver Cromwell, and execution for treason in 1649.

In a post for the “Yesterday Channel” for UK TV, a blogger posed the question, “Did King Charles I Deserve to Die?” After offering the case for the prosecution, the blogger, I would say, makes a more compelling case for the defense, noting that Cromwell and the military arrested any MPs in favor of negotiating with Charles at the end of the civil war. In other words, they engineered a military coup, echoing Macaulay’s charge.

(The image accompanying this post is by the Dutch painter Gerrit van Honthorst in 1628.)