Quote of the Day (John Adams, on the U.S. vs. ‘Artifice, Imposture, Hypocrisy, and Superstition’) 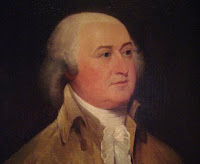 “The multitude have always been credulous, and the few are always artful. The United States of America have exhibited, perhaps, the first example of governments erected on the simple principles of nature; and if men are now sufficiently enlightened to disabuse themselves of artifice, imposture, hypocrisy, and superstition, they will consider this event [the creation of the U.S.] as an era in their history.”—John Adams (1735-1826), signer of the Declaration of Independence and second U.S. President, “A Defence of the Constitutions of the United States of America” (1778), in The Works of John Adams, Vol. 4 (Novanglus, Thoughts on Government, Defence of the Constitution) [1851]

From his extensive study of law and the classics, John Adams was well aware of the dangers posed to self-government. But it was his hope—at least in the American Revolution—that “The people were universally too enlightened to be imposed on by artifice; and their leaders, or more properly followers, were men of too much honor to attempt it.”

And it was his belief that education and reason would minimize the corruption and misrule he saw all across Europe—even in the England that once commanded his steadfast loyalty.

Unfortunately, the events of the last week have called his optimism into question, because it is more manifestly apparent than ever that an American President and the party on bended knee before him do not have an even elementary concept of “honor.”

They have weaponized the authority of the Oval Office and the dangers of social media in its Wild West stage to exploit the faith of half the American republic—and defy the 220-year tradition of an orderly, peaceful transfer of power between Presidents of opposite parties.

It should be no surprise that Donald Trump, having predicted that the 2016 election would be “rigged” weeks before it even took place, would repeat his claim this year, especially when the results were more or less reversed.

But by this time, I had expected that Republican leaders on Capitol Hill, exhausted by the 24/7 tide of insults, bullying, untruths and chaos that they have had to endure the past four years, would edge away from Trump’s desperate effort to hold onto the Presidency at all costs by refusing to concede to Joe Biden.

Shame on me. After their craven capitulation to him during the impeachment proceedings this past winter, I should have known better. And I should have known, contrary to their assurances then that it was up to the American people, not their lawmakers, to remove the President from office, that in the crunch they would accept no such outcome.

In acquiescing to Trump by refusing to publicly accept the collective decision of the electorate, they countenanced with a straight face the notion that nationwide results that stymied an expected “blue wave” against GOP congressmen, senators and local officials had then magically been jiggered to work against the president.

It was disheartening, especially in the Senate, to see officeholders historically jealous of their privilege and power act with a supine subservience unmatched by counterparts in the decadent Roman Empire.

It was astonishing to witness politicians who once couldn’t wait to rush to a TV camera or microphone walk now with heads bent firmly down, deaf even to shouted questions from reporters wanting their reaction to the latest Presidential outrage.

It was infuriating to hear Senate Majority Leader Mitch McConnell state, in the absence of any credible evidence, that President Trump was “100 percent within his legal rights” to pursue his multi-state lawsuits over spurious voter fraud.

But it was downright nauseating to hear him claim, with a straight face: “Let’s not have any lectures, no lectures about how the president should immediately, cheerfully accept preliminary election results from the same characters who just spent four years refusing to accept the validity of the last election.”

Let it be stated, as it appears that the GOP leader on Capitol Hill has suffered a conveniently catastrophic memory loss, that Hillary Clinton called to congratulate Trump the night of the 2016 election and formally conceded before her supporters the next morning.

And it is disgraceful, whatever his motives, that McConnell allows Trump to continue to launch baseless accusations that undermine the legitimacy of the republic for which Adams and the other signers of the Declaration of Independence pledged “their lives, their fortunes and their sacred honor.”

Trump supporters must now reckon with the fact that he is more than simply a crybaby, a sore loser, or an aging, petulant poseur who must be humored for just a little while longer.

Something else is suggested by these events of the past 48 hours: McConnell’s spineless Senate speech, Secretary of State Mike Pompeo’s smug assurance of a transition to a second Trump term, Bill Barr’s authorization of investigations into chimerical massive voter fraud, and especially the removal or resignations in protest of Defense Secretary Mark Esper and the heads of three other agencies at the National Security Agency and the Pentagon.

Trump supporters, do you realize that the President is orchestrating an accelerating coup attempt? Do you understand that he is mobilizing the “artifice, imposture, hypocrisy, and superstition” that Adams assailed? Do you recognize what this means for the survival of the republic you profess to love?