Quote of the Day (Robert Benchley, on Hating to Ask Questions of Strangers) 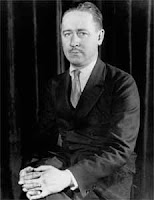 “I can't quite define my aversion to asking questions of strangers. From snatches of family battles which I have heard drifting up from railway stations and street corners, I gather that there are a great many men who share my dislike for it, as well as an equal number of women who...believe it to be the solution to most of this world's problems. The man's dread is probably that of making himself appear a pest or ridiculously uninformed. The woman's insistence is based probably on experience which has taught her that anyone, no matter who, knows more about things in general than her husband.”—American humorist and film actor Robert Benchley (1889-1945), "Ask That Man," in Pluck and Luck (1925)

Seventy-five years ago tomorrow, Robert Benchley died, triggering ennui among his old Algonquin Round Table friends about an end of an era. But before that, the chief emotion aroused by the last medical crisis of this talented, gentle, alcoholic humorist sadly disappointed in himself was an overwhelming, desperate desire to help.

Christopher Buckley noted, in reviewing a 1997 biography of the man sometimes confused with his grandson, Jaws novelist Peter Benchley: “As he lay in the hospital, hemorrhaging to death from cirrhosis, forty people showed up to volunteer to give blood. How many writers could make that posthumous boast?”

I can’t think of all the times that I have posted quotes from Benchley. But I would do it countless times more if I could get even one of my readers to hunt down one of his humor collections from a library, an antiquarian bookstore, or Amazon. I can think of few better ways to raise a chuckle during a year when we all need it so badly.