TV Quote of the Day (‘Frasier,’ As Our Hero Calls in a Big Favor on Little Bro) 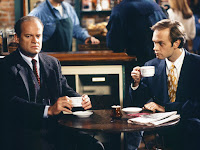 [Niles Crane refuses to sub as radio shrink during his brother Frasier’s vacation.]

Frasier Crane [played by Kelsey Grammer] [haughtily]: “Very well. You leave me no alternative but to call in my marker.”

Frasier [lowering his voice threateningly]: “Oh, I think you know.”

Niles: “That was three years ago.”

Frasier: “I don't recall there being any statute of limitations. I distinctly recall that when you asked me to go out with Maris's sister, you said that you would ‘owe me one forever.’"

Niles: “But you only spent one evening with Brie. That hardly compares with what you're asking me to endure.”

Frasier: “Oh? Shall I refresh your memory? Midway through the opera, her ermine muff began to tremble. As it turned out, she had used it to smuggle in her adorably incontinent Chihuahua. Just as I thought we'd reached the low point of the evening, I suddenly felt a sandpaper tongue licking my earlobe. Alas, it did not belong to little Herve! Fortunately, my shriek coincided with the on-stage murder of Gondolfo!”— Frasier, Season 4, Episode 5, “Head Game,” original air date Nov. 12, 1996, teleplay by Rob Greenberg, directed by David Lee