Joke of the Day (Burns and Allen, With Her Presidential ‘Announcement’) 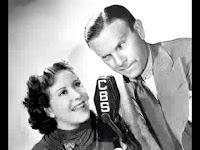 Gracie Allen: “George, I’ll let you in on a secret. I’m running for president.” [audience applause]

George Burns: “Gracie, how long has this been going on?”

Recently, a former teacher told me of a reference he made in class about 20 years ago to Jack Benny. His students’ faces went blank when they heard these two, he told me. I’m afraid that they would register only marginally more recognition today if they heard the names of Benny’s longtime friends, George Burns and Gracie Allen.

Maybe, just maybe, some might recall a film that Burns made with John Denver, Oh, God! A few of the more trivia game-minded might remember seeing Burns’ appearance in his Oscar-winning Best Supporting Actor role in The Sunshine Boys.

But I think you’d be hard-pressed to find anyone under 65, maybe even 70, who’s very knowledgeable about Allen, Burns’ wife of 38 years and his brilliant comic partner for 36. That’s in no small part due to the fact that she last appeared with him on their eight-season-long TV situation comedy in 1958. But the comic duo had quite a run in their day, spanning vaudeville, radio, film and TV.

Their act—he, the straight man to her lovable ditz—may have reached a zenith of sorts in 1940. That year, Franklin Roosevelt sought to become the first President to win a third term. But Gracie, she announced, had her own “first” in mind: the first female President.

Just two decades after women got the right to vote, many American males found it laughable on its face that a woman would even think of running for President. But, with Nazism spreading across Europe and Americans squabbling over the necessity of intervening in that conflict, the country sure needed a laugh, and on their radio show that year Gracie (contrary to her image, as shrewd as they come) and her husband were happy to oblige, with a campaign where she was billed as the “Surprise Party’s Dark Horse.”

In her high-pitched voice, she took issue with George’s sputtering claim that Presidents were born, not made, responding: “Well what do you think I was, hatched?”

Amazingly, the couple’s publicity stunt took on a life of its own, with thousands turning out for her “tour” and receiving write-in votes even after “retiring” from her campaign, according to this 2008 NPR story.

Gracie’s “campaign,” of course, was completely a put-on. But many listeners now would find it all too close to reality to encounter a candidate with little prior knowledge of world geography, let alone politics (she looked forward to votes from Canada and Mexico); who promises Cabinet posts to friends (in her case, based on which of her outfits they preferred); and most of all, whose campaign slogan was “Down with common sense.”

(BTW: if you want to catch the couple in action, other than through YouTube clips, you are best off to watch Antenna TV through your local cable TV lineup. Just hope it’s not at some ungodly overnight hour.)