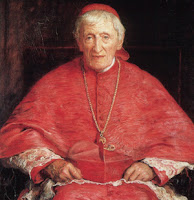 Oct. 9, 1845—Two years after leaving an influential religious post at Oxford over his growing doubts about the Church of England, John Henry Newman fell to his knees before an Italian missionary who had come at his request, and was admitted into the Roman Catholic Church.

The visiting priest, Fr. Dominic Barberi of the Passionist religious order, passing through England on his way to Belgium, knew Newman by reputation as “the most learned ecclesiastic in England.”

But after he showed up, soaked to the skin after walking through torrential rain, at Newman’s chapel in the village of Littlemore, Fr. Barberi encountered someone far more down to earth: “In my judgement, he is one of the most humble and loveable men I have met in my life.”

Over three decades later, upon being named a cardinal in the Roman Catholic Church, Newman took as his motto Cor ad cor loquitur (i.e., “heart speaks to heart”). That was the nature of his life as a spiritual counselor at Oxford and what he had looked for previously as he assessed a church he had come to identify with intellectually while still demanding to “see more sanctity in her than we do at present.”

If Roman Catholicism really wanted to convert England, Newman had noted, “let them go barefooted into our manufacturing towns – let them preach to the people like St. Francis Xavier – let them be pelted and trampled on, and I will own that they do what we cannot. I will confess that they are our betters far.”

That is what Newman encountered in Fr. Dominic, a cleric of frail health due to die within four years, but gifted with a deep, far-ranging scholarship and personal warmth that mirrored those same qualities in Newman.

“His very look had a holy aspect which when his figure came in sight in my circle most singularly affected me, and his remarkable bonhomie in the midst of his sanctity was in itself a real holy preaching,” Newman remembered years later. “No wonder then I became his convert and penitent.”

Years in the making, Newman’s embrace of Catholicism had been preceded by charismatic leadership of the Oxford Movement, a group of spiritual activists at the university who argued against the increasing secularization of the Church of England.

Yet, in examining the origins of Anglicanism, he had concluded uncomfortably that its crucial early document, the Thirty-Nine Articles, was not the “middle way” between Catholicism and Protestantism he had expected. Instead, in his Tract 90, he proposed, as noted by Michael J. G. Pahls and Kenneth Parker in their contribution to The Oxford Handbook of the Oxford Movement, “an Anglicanism that was genuinely catholic—at once true to its apostolic patrimony and at the same time solicitous of reconciliation with other portions of the true church.”

The publication, which Newman later saw as his last attempt to remain within the Anglican fold, led to a storm of controversy. In ambivalence and agony, Newman withdrew to the semi-monastic community at Littlemore, mindful to avoid junior colleagues he had mentored until he could resolve his own inner turmoil.

Growing Protestant suspicions about his continued beliefs dismayed Newman, even as he noted the swelling sympathy for him among English Catholics. While writing his Essay on the Development of Doctrine early in 1845, his doubts gradually fell away, until he finally made his overture to Fr. Dominic.

An incisive theologian, Newman, through his conversion, positively influenced the position of Catholicism in Britain to a degree it had not enjoyed since Henry VIII. “The shock [to Britain] was tremendous,” wrote Richard Altick in Victorian People and Ideas. “Even [Prime Minister Robert] Peel’s reversal of the Corn Laws the next year created no greater excitement.”

While the Roman Catholic Relief Act 16 years before had removed onerous legal restrictions in place since Elizabeth I, Newman’s impassioned preaching and deep friendships led roughly 250 ministers or theological leaders at Oxford and Cambridge alone to follow him into the Roman Catholic Church after his conversion, according to Earle E. Cairns’ Christianity Through the Centuries.

Even Victorian politicians underscored the wide cultural impact of Newman’s move. Prime Minister William Gladstone remarked, “I regard Newman’s concession as an event as unexampled as an epoch.” Gladstone’s great political rival for England’s highest political office, Benjamin Disraeli, went even further, seeing Newman’s conversion as dealing “a blow to England from which she yet reeled.”

Part of the stunning nature of the conversion came because of what Newman had come to represent in the dozen years before and how he had come to renounce his former views. As he later wrote, negative opinions about him after his shift were almost unavoidable “when a man, who had written strongly against a cause, and had collected a party round him by virtue of such writings, gradually faltered in his opposition to it, unsaid his words, threw his own friends into perplexity and their proceedings into confusion, and ended by passing over to the side of those whom he had so vigorously denounced.”

The dramatic break in Newman’s life was not his first shift in religious adherence, but it was far more consequential for him. He had converted to evangelical views at age 15, only to relinquish them 14 years later.

Yet the shift to Catholicism meant he had to give up his position as Vicar of St. Mary’s. the University church at Oxford, as well as many of the friends he had made and the comfort of the established Church of England.

For all those who followed Newman’s lead out of the Anglican Church, he attracted an even more vociferous set of critics who could not abide either his shift or his growing prestige in the Roman Catholic Church. One critic, the clergyman and writer Charles Kingsley, published a blistering and erroneous attack 18 years later, claiming that “Truth, for its own sake, had never been a virtue with the Roman clergy,” and that Newman had justified the need for falsehood.

After being unable to extract from Kingsley either a citation of such an objectionable statement or an apology for the accusation, Newman responded with Apologia pro Vita Sua (“A Defense of My Life”), which has taken its place with St. Augustine’s Confessions and Thomas Merton’s The Seven-Storey Mountain as classic conversion narratives.

Complex, sometimes even paradoxical, Newman sought solitude and was so instinctively reticent that he recoiled at the prospect of controversy with Kingsley. But his pastoral concern led him to reach out constantly to other people, and he cemented friendships through his affability and kindness.

It is difficult to underestimate Newman’s importance in his own time or ours. Through his numerous personal contacts, he established a network of associates that would advocate for the Roman Catholic Church, both in England and Ireland, where he established the Catholic University of Ireland (an experience that inspired him to write the seminal Idea of a University).

A poet of considerable power, he befriended a later Roman Catholic convert who published his own celebrated verses, Gerard Manley Hopkins. Most of all, in a prolific body of work now comprising 40 volumes, Newman wrote with an erudition and elegance of expression that marked him as one of the masters of Victorian prose.

During Vatican II, Newman was hailed as a forerunner of several concerns of the council, including ecumenism, concern for the laity, and doctrinal development.