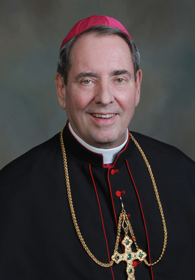 “I blush and tremble when I consider the terrible judgment impending on ecclesiastical superiors who live at their ease in rich palaces, while so many souls redeemed by the blood of Christ are perishing. I pray without ceasing, to the Lord of the harvest, that he send good workmen into his harvest.” —St. Vincent Ferrer (1350-1419), from a letter in 1403, quoted in Alban Butler,
The Lives of the Fathers, Martyrs, and Other Principal Saints, Volume 4 (1845)

The Roman Catholic faithful of the Archdiocese of Newark can only pray that the death late last month of retired Archbishop John Myers means the end of a long era of misconduct, scandal and shame. He and predecessor Cardinal Theodore McCarrick might not have lived in the plush palaces of Renaissance archbishops that St. Vincent Ferrer lamented, but real estate used by both of these modern princes of the Church lies at the heart of the lack of accountability that abused the faith of millions of those under their spiritual direction and care.

It's been 18 years now since the sexual abuse scandal exploded full force across the pages of the Boston Globe. I have avoided commenting on it as much as I should, for its global dimensions have been agonizing for believers like me to contemplate, let alone sort through in writing.

But the news regarding McCarrick and Myers has hit me where I live, as it has so many others in the Archdiocese of Newark. Or, as a relative of mine wrote me, after hearing the first account of McCarrick’s sexual harassment of seminarians: “Just imagine—they asked us to pray for him every Sunday!”

A couple of years ago, several commentators on the blogosphere contrasted McCarrick, a “progressive,” with Myers, a “traditionalist.” One was a “predator” and “pervert”, the other an upholder of standards, they claimed.

In truth, the “conservative” and “progressive” labels for these two archbishops, as well as so many of their brethren in the American Catholic hierarchy, were immaterial. However much they may have differed on, say, threatening to turn away local pro-choice politicians from the altar in receiving the Eucharist, what really mattered was that they gained and retained their high offices through fundamentally adhering to a narrow range of criteria imposed by Rome, including on such issues as contraception, abortion, same-sex marriage, and a male-only, unmarried priesthood. 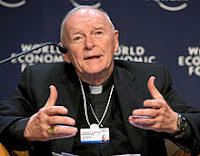 McCarrick’s shenanigans were, according to several accounts, an “open secret” in Church circles. His house at the Sea Girt, NJ—in addition to the traditional archbishop’s residence in Newark, mind you—became his happy hunting ground for preying on seminarians in the 1980s. If “Uncle Ted” took a shine to you, you were well advised to find any excuse possible to decline his invitation to visit him there.

Eventually, the news about this beach house reached such a crescendo within the Church that it reached the Vatican, which in the late 1990s sought, in its cumbersome way, to induce him to sell it (evidently in the belief that it was the place that provided the “occasion for sin,” rather than the sinner himself, that was the problem).

But that did not stop McCarrick; he merely found another beach house, this time in Brick, less than 10 miles away down by the Jersey Shore. (To date, no allegations of wrongdoing have emerged concerning this second residence; but the results of the Vatican’s wide-ranging investigation of his activities have not yet been revealed, so who knows?)

(A more in-depth account of the transactions involving these two beach houses—too involved and even serpentine to summarize quickly on this post—can be found here.)

Myers followed his predecessor’s playbook in using his high position to make use of real estate for his own purposes, in ways that were at best inadvisable and at worst inappropriate. His retirement home in affluent Hunterdon County—already equipped with five bedrooms, three baths, a three-car garage, elevator and swimming pool—swelled in 2014 with a 3,000-sq.-ft. addition that included a library, an indoor exercise pool and a hot tub.

Understandably, National Catholic Reporter assailed the archbishop for his “arrogance and self-importance.” Perhaps Myers thought he was taking a vow of poverty compared with Bishop William Murphy of the Rockville Centre diocese, memorably nicknamed “Mansion Murphy” by the late columnist Jimmy Breslin for his $1.5 million private Long Island residence.

But longtime parishioners throughout the Archdiocese of Newark, eyeing the badly needed repairs for their own simple churches and rectories—and seeing their parochial schools close—could surely be forgiven for wondering if Myers needed all that.

At about this time, McCarrick, nearly a decade after stepping down as head of the Archdiocese of Washington, still was considered an eminence grise in the Church. But clouds were gathering, and by 2018 several media outlets reported on allegations that he had committed sexual abuse against male minors years before.

In certain ways, the term “sexual abuse” as applied to the church scandals in general and McCarrick’s in particular gives an inadequate idea of the nature of the offense, with a prurient focus on sins of the body. Even more, it was an abuse of power, an exploitation of position, and a violation of victims’ souls.

McCarrick’s personal misconduct was enough to lead to his resignation from the College of Cardinals and eventually his dismissal from the clergy—the first time, it is believed, that a cardinal has ever been laicized for sexual abuse.

Through relentless questioning by the media, we are only now beginning to grasp how McCarrick himself sexually violated boys and young seminarians. It will take even longer for a proper accounting of how much he impeded similar inquiries concerning the priests he supervised. Amazingly, he may well see his once-bright reputation tarred further.

In that respect, Myers’ demise helped him avoid such a fate. Last December, New Jersey eased its civil statute of limitations, opening the floodgates to approximately 70 sexual-abuse lawsuits to date. But for Myers’ death, he might have been deposed to explain what he did—or, to use a phrase used about another leader involved with a cover-up, "What did he know and when did he know it?”

One case overseen by Myers has proven particularly notorious: He allowed one cleric, Michael Fugee, to remain in a rectory even after confessing to fondling a boy in a Wyckoff parish. After Fugee’s conviction on a charge of aggravated sexual contact was dismissed on a technicality, prosecutors agreed not to retry the case as long as Fugee was no longer around children.

But in 2013, the Bergen County Prosecutor’s Office was forced to monitor Fugee again, after discovering that he had heard confessions at youth group retreats. In the most devastating words that imaginable for abuse victims and their families who had hoped the hierarchy had learned from the past, the Prosecutor’s Office stated that they "no longer have confidence" that the Newark Archdiocese would abide by its earlier agreement with Fugee.

Myers might have railed against Catholics who “endorse or support” individuals or groups that publicly differ from the church’s teachings on sexual matters, but he remained silent about McCarrick’s violations of sexual norms. He ensured that his predecessor's misdeeds would be concealed when the archdiocese settled cases in 2005 and 2007 involving McCarrick from years before.

Before the abuse scandal broke, conservatives in the hierarchy such as Cardinal Bernard Law publicly took issue with Cardinal Joseph Bernardin’s notion of a “consistent ethic of life” in favor of a narrower emphasis on abortion, contraception and homosexuality. Law and his backers saw that as an example of “fraternal correction.”

But, given what we now know what happened in Boston—and in Newark under McCarrick and Myers—a corollary will have to be introduced to that notion: “fraternal coverup,” or “I won’t tell on you if you don’t tell on me.”

McCarrick and Myers exercised their clerical privilege until it was no longer safe for them to do so. The faithful of the Archdiocese of Newark—dwindling in number, debilitated by dealing with their treachery—will be eradicating the stench for years to come. The “good workmen” of God’s harvest that St. Vincent Ferrer prayed for can’t come soon enough.