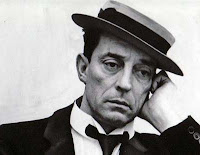 Oct. 4, 1895— The son of vaudevillians, Joseph Frank Keaton was born on a barnstorming tour in Piqua, KS—but he would become better known to audiences as Buster Keaton, part of the “Great Triumvirate” of the most popular silent film comedians, along with Charlie Chaplin and Harold Lloyd.

At six months old, the child survived falling down a flight of stairs. A visiting family friend, Harry Houdini, picking him up, said the youngster could really take a “buster,” or fall, giving rise to his nickname. At three months old, the boy was incorporated into his parents’ vaudeville act.

If his father Joe gave Buster an early boost in the entertainment industry, he also foreshadowed his own fate. The elder Keaton fell victim to alcoholism, breaking up his family and his act, falling on hard times until the love of another woman years later led him to curb his drinking at last—all circumstances repeated in the case of his son.

But at the height of his popularity in the 1920s, “The Great Stone Face” (a nickname given for his cinematic impassivity in the face of staggering disaster) set standards for comedy that influenced filmmakers for generations.

In a series of shorts from 1917 to 1920, Keaton learned the tricks of the trade from another ex-vaudevillian, Roscoe “Fatty” Arbuckle. Several years later, when Hollywood shunned the roly-poly comic after a sensational sex scandal and three manslaughter trials in which he was eventually cleared of all charges but still found his name blackened, Keaton showed his loyalty by giving him financial assistance, securing directing work for him, and even testifying publicly on his behalf.

Keaton’s reputation rests on nearly 20 shorts and 11 silent features in which he wrote, directed and starred in the 1920s that made use of his of the acrobatics he learned in vaudeville. Several not only still leave modern audiences shaking with laughter but industry professionals shaking their heads that Keaton could even pull off such hair-raising stunts on his own so early in the life of Hollywood.

The Steamboat Bill Jr. sequence, for instance, when a house collapses around him and he miraculously escapes unscathed, could no longer be filmed as is because of insurance-company considerations, according to Gary Giddins’ “Speechless” essay on Keaton and Chaplin in the critic’s 2006 collection, Natural Selection.

Stunt men are still flabbergasted that he could be pulled onto a speeding train with just one outstretched arm in the short Cops. And Keaton did not realize until a doctor visit years afterward that he had broken his neck while filming a railroad water-tank scene in Sherlock Jr.

Many of his gags resulted from his fascination with mechanics and his careful discussion with associates on how to use this to pull off a sequence. In the 1921 two-reeler, The Boat, he finally figured out how to film the launch of the ship from a pier. (The boat name in this film gave rise to the identification used by members of The International Buster Keaton Society: the Damfinos.

This fascination with mechanics may have reached a height in Sherlock Jr., where his projectionist character falls asleep, dreams that film’s villain and love interest are his rival and girlfriend, and leaps into the theater screen to set matters right. (Woody Allen would use the same idea in his 1985 comedy, The Purple Rose of Cairo.) And, in The General, the climactic train crash cost the equivalent of more than half a million dollars in today’s terms, in what is believed to be the most expensive scene in silent film history.

No account of Keaton’s persona can fail to mention two other items: his pork pie hat and still, unsmiling face.

The actor, feeling he needed a different kind of hat to distinguish himself from other screen comics, decided to fashion the pork pie by cutting a Stetson, stiffening the brim with sugar water, adding granulated sugar in a teacup of warm water, then wetting the top and bottom of the brim before letting it dry until it became stiff. He would have to make multiple such hats for each picture, as he did more water stunts than most comics of the time.

As for the face: he would later claim that he was so caught up in the details of making a movie that he didn’t realize he wasn’t smiling. But it turned out to be an ideal counterpoint to the manic motion of his stunts. As critic James Agee explained:

“He used this great, sad, motionless face to suggest various related things; a one-track mind near the track's end of pure insanity; mulish imperturbability under the wildest of circumstances; how dead a human being can get and still be alive; an awe-inspiring sort of patients and power to endure, proper to granite but uncanny in flesh and blood. Everything that he was and did bore out this rigid face and played laughs against it. When he moved his eyes, it was like seeing them move in a statue.”

The prospect of talkies did not faze Keaton in the least, because his voice had been trained in vaudeville. But he was tripped up from an unexpected quarter: his brother-in-law, Joseph Schenck.

Schenck, who had handled the business end of operations while Keaton handled the creative details, persuaded him, following the box-office failures of Steamboat Bill Jr. and The General, that he should give up his own studio and join MGM. The new arrangement proved a straitjacket for Keaton, as the studio sharply curtailed his practice of performing his own stunts and required prior script approval from an artist who depended heavily on improvisation.

At the same time, the collapse of his marriage led wife Natalie Talmadge to initiate bitter divorce proceedings—and Keaton to drink heavily, lose his contract with MGM and suffer a nervous breakdown.

On the rebound, Keaton married his nurse—but that relationship fell apart, too, in a few years. It was not until 1940, when Keaton wed his third wife, dancer Eleanor Norris, that he achieved emotional stability, and not until the end of the decade—a full generation after his emotional and creative downward spiral began—that he came back into the public’s consciousness, through three major events:

*Sunset Boulevard (1950) included Keaton among bridge players who meet at the home of fellow silent-film star, the fictional Norma Desmond (played by the real-life Gloria Swanson);

*Limelight (1952) teamed Keaton for the first and only time with Chaplin.

From the 1950s through the mid-1960s, Keaton worked constantly, mostly in television, with the occasional film supporting appearance (e.g., Beach Blanket Bingo, A Funny Thing Happened on the Way to the Forum). By his death in 1966, he had gained a new generation of admirers, a cadre that, over the years, has included Orson Welles, Peter Bogdanovich, Mel Brooks, Richard Lewis, Bill Hader, and Dick Van Dyke (another physical comedian, who gave the eulogy at the funeral for his friend).

Appreciation of this multi-talented innovator only grows. Earlier this year, for example, the U.K. newspaper The Guardian published an account of two previously unpublished sketches—typed out completely by Keaton, most likely in the 1950s—that spell out two of his gags. The discovery was likened by Alek Lev, vice president of the International Buster Keaton Society, to a “holy relic.”