TV Quote of the Day (‘The Andy Griffith Show,’ In Which Barney Practices Law and Order) 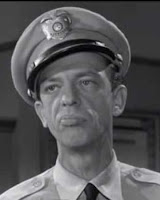 Deputy Barney Fife [played by Don Knotts]: [addressing three new deputies]: “Now listen, men, and listen good! There’s liable to be trouble out there today. We’re liable to have folks among us who are here for more than just a good time, if you know what I mean! Now the minute there looks like there’s gonna be trouble, we got to NIP IT! Nip it in the Bud! You got that? Let’s hear it!”—The Andy Griffith Show, Season 2, Episode 21, “Guest of Honor,” original air date Feb. 26, 1962, teleplay by Jack Elinson and Charles Stewart, directed by Bob Sweeney

Sixty years ago today, hoping to capitalize on a character that had been a big hit in a guest appearance on The Danny Thomas Show, CBS aired The Andy Griffith Show for the first time.  In 249 episodes over eight seasons, viewers became used to Sheriff Andy Taylor dispensing justice in the kind of commonsensical fashion they could only wish for in their own communities.

I was too young to watch the show in its initial, and I must confess that, Faithful Reader, that when I first got wind of it in reruns, a certain variety of rural-based series (Green Acres, Petticoat Junction, The Beverly Hillbillies, and Hee Haw) had so come to dominate the prime-time schedule that I had formed a stereotype into which I slotted The Andy Griffith Show. As far as I was concerned, Mayberry may as well have been called Hitsville, U.S.A.

How wrong I was!

As I have discovered over the last year in COVID-19 isolation, the people of Mayberry may not have fancy educations but they’re not stupid. They may be quirky, but they’re also recognizably human—one of the reasons, oddly enough, that the Farrelly Brothers of gross-out comedy fame (There’s Something About Mary, Shallow Hal), have looked to this classic sitcom as their model for humor that, when all is said and done, leaves viewers valuing kindness.

(“I remember watching reruns of The Andy Griffith Show, and that's the thing we like, where you're laughing or giggling at stuff but also you're feeling something,” director Peter Farrelly said in an interview for the Website “Sound and Vision.” “There's something always a little heartfelt in the Andy Griffith shows that we aspire to get. We try to make you have some laughs, but you've also got to feel something for our movies to work.”)

That community (based loosely on Andy Griffith’s hometown, Mount Airy, NC) was what he had in mind years later when he said the star of the show was Mayberry. And it is true that this group gave Griffith and the two other chief creator forces behind the sitcom, producers Sheldon Leonard and Aaron Ruben, endless comic fodder, along with characters (Aunt Bee, Goober and Gomer, Floyd the Barber, Howard Sprague, Ernest T. Bass, and Otis the town drunk) that viewers looked forward to.

But I think that Griffith deflected attention from his own shrewd evolution of Andy into the sensible, compassionate center of this small town. It’s also easy to forget from the statement that he was able to shift attention in later seasons to Andy’s relationship with son Opie because of the remarkable development of Ron Howard (who, actress Elinor Donahue—Andy’s first girlfriend, Ellie—recalled in an interview for The Archive of American Television, was “the best child actor I had ever worked with up to that point”).

Most of all, though he was at pains to credit his friend’s contribution virtually every time he had the chance, Griffith in this instance didn’t acknowledge that there was a first among equals in this supporting cast, a partner with whom he enjoyed terrific creative synergy: Don Knotts.

As I mentioned in a prior post, Knotts won five of the five times he was nominated for an Emmy in the role. He was such a hard act to follow that, when he left the comedy after the fifth season, the show’s writers couldn’t figure out how to use Jack Burns, who took over as Deputy Warren Ferguson, so they wrote him out after 11 episodes and didn’t bother to get a permanent replacement in the last 2½ seasons.

Knotts’ departure was not optimal for anyone connected with the show. When Griffith decided to continue after the expiration of his original five-year contract, Knotts had already signed another five-year deal with Universal Pictures.

A friend tells me that one of Knotts’ big-screen movies, The Incredible Mr. Limpet, is, fact, great fun. But his popularity at the box office never matched what he had achieved on TV, and his contract wasn’t renewed.

In the meantime, once he lost the services of his friend, Griffith also lost a terrific comic foil, and over the last couple of seasons viewers came to look forward to Knotts’ occasional guest appearances.

Over the years, when writers try to evoke a seemingly ideal small town with few or no problems, the name they immediately summon is “Mayberry.” In this year of lockdown and isolating in place, Americans have missed the chance to walk around their own “Mayberries” without fear.

They miss the days when the biggest issue on their TV screen was how Andy would persuade Opie to get over his crush on Helen Crump, the sweet schoolteacher who also happened to be the sheriff’s girlfriend. As they reimagine the notion of a community, they will have to make do with black-and-white images of Andy rescuing the good-hearted but hapless Barney from another self-created mess involving firearms and an overly rigid exercise of authority.