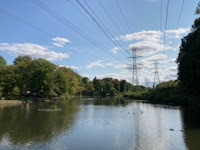 On a trip up to Mahwah in northern Bergen County yesterday to dine outside with a friend, I spotted this lovely site on the right side of the road. I could only make out one sign as I drove back: “Duck Crossing.” The site turned out to be Winter’s Pond, part of the township’s Winter Park, named after a family long associated with the town.

The first recorded mention of this pond was back in 1799, when John Winter used it to power his sawmill. The mill ceased to operate in 1894, but since then the site has been used for other purposes, including running ice houses and serving as a popular ice skating spot.

More recently, from 1992 to early in this past decade, cleanup of the pond and park was conducted, including dredging the pond and adding a covered bridge and gazebo, both of which added to its picturesque flavor. Even after so much time and different uses, you can still see evidence of the industry that has formed a part of this area's life in the wires and towers visible in this photo I took yesterday.