Quote of the Day (Samuel Johnson, With a Word Worth Reviving) 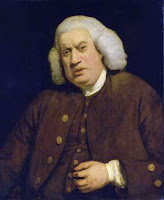 “OPINIATOR. n.s. [opinionatre. French.] One fond of his own notion; inflexible; adherent to his own opinion.”—English man of letters and pioneering lexicographer Dr. Samuel Johnson (1709-1784), A Dictionary of the English Language (1755)

Dr. Johnson could not have imagined the exponential rise of this group over the past 265 years. It now encompasses not just the politicians, printers, and coffeehouse city chatterers of his own days, but now an entire pundit class, bloggers, and social-media users so numerous as to be impossible to estimate.