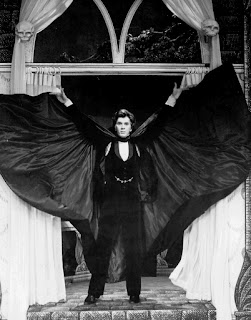 October 20, 1977—In every possible way, Dracula should have been dispatched by critics with their usual mindless one-word dismissals of Broadway revivals: “dated.” It had been 80 years since publication of Bram Stoker’s horror novel, and 50 years to the month since John Balderston had adapted Hamilton Deane’s British play for an American audience. Bela Lugosi was dead, and the count from Transylvania had become fodder for comics with his thick accent, pallid pallor and preposterous sleeping habits.

Instead, the production premiering at the Martin Beck Theatre on this night became a roaring success, a straight play that lasted for more than 900 performances—three times the length of the original Deane-Balderston play that made Lugosi a star in the United States. In no small measure, the play’s success owed much to star Frank Langella and scenic and costume designer Edward Gorey.

The photo accompanying this post, in a way, captures the contribution of both men. Langella fills the space below the arch not just with his tall frame but upstretched arms. Not for him the familiar blood-red eyes and fangs, nor even that accent. Instead of a creature of the mists and howls of his overseas castle, he radiates a sexual charisma that makes him more our contemporary than that of the Victorians he threatened. He is “mad, bad and dangerous to know,” to borrow the phrase used by Lady Caroline Lamb about her lover, the poet Lord Byron (who, as it happened, inspired what is considered the prototype of the modern vampire tale: The Vampyre, by his doctor friend John Polidori).

Notice the background of the photo: It’s black and white. Much like photography of this kind, it’s stark, eliminating the distraction of color, forcing attention to shapes and shades. It is beyond time, much like the un-dead Count himself.

Gorey’s black-and-white design has other implications. It suggests that the mere presence of Dracula has drained the world he invades of the normal palette of colors. At the same time, as director Dennis Rosa noted in a short interview with radio hosts Isobel Robins and Richard Seff for their “This Is Broadway” series, it also represented “good against evil, white against black.”

But that’s not all here. Over the archway, anchoring the curtains, is a pair of skulls—the kind of macabre but satiric touch that Rosa and the show’s producers hoped for when hiring Gorey, whose illustrations had appeared in outlets as diverse as children’s books and The New Yorker. Bat motifs appeared increasingly throughout the play, suggesting Dracula’s spreading, insidious influence, and amid each black-and-white tableau is a spot of red—a symbol of blood.

Some critics, including New York Magazine’s John Simon, complained that all of this was camping the play up even before the plot started. I think the Gorey-Rosa approach was exactly right, however. Staging the drama without a wink of only kind would have been ridiculous, practically inviting comments about the hoary nature of the material, with the inevitable jokes about the show being un-dead on arrival.

No, the wink-and-a-nod approach allowed the show’s creators to challenge thinking about the character. Lugosi’s Dracula had only directly addressed the audience once, with a comment about how living in Transylvania had left him with “few opportunities.” In contrast, Langella’s Count was continually looking out of the corner of his eye at the audience, making them complicit in his actions—and mocking the staid British Victorians he was attempting to subvert.

The following spring, I saw the play as part of an “Enrichment” day offered by my high school, in which we had the choice of several plays or musicals to attend. I had heard the play was good, but I had no idea of the particular nature of it, nor why so many females were in my class group attending the show.

Hearing the mass squeals of delight from the co-eds, I suddenly understood the intense appeal to this group. Yet they were hardly alone: one female theatergoer on opening night, in a widely reported remark, observed, “I’d rather spend one night with Dracula dead, than the rest of my life with my husband alive.”

Like Lugosi, Langella repeated his star turn onscreen as the bloodthirsty count, albeit with less successful results. The fault, however, lay not with him (nor with his co-star, the luminous Kate Nelligan) but with director John Badham, who, fresh off his success with Saturday Night Fever, jettisoned Gorey's design for a more "realistic" color palette and introduced ill-conceived changes to the original story.

I had seen Langella previously on TV, in PBS’s Theater in America production of Chekhov’s The Seagull, but this experience was my first hint of what a magnetic stage performer he could be. He had already won a Tony Award as a lizard in Edward Albee’s Seascape, and now he would gain a nomination as Stoker’s eternal bat-man.

Among my cherished memories of Broadway shows in the past couple of decades have been his appearances in appearances in Noel Coward’s Present Laughter, Robert Bolt’s A Man for All Seasons, and Terence Rattigan’s Man and Boy. The septuagenarian might no longer be a matinee idol who can make women of all ages swoon, but he remains as much a mesmerizing stage presence as when I saw him 35 years ago.
Posted by MikeT at 11:41 PM