TV Quote of the Day (‘One Day at a Time,’ With Schneider on ‘One of the Basic Rules of Grammar’) 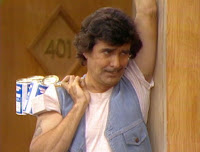 Julie Cooper [played by Mackenzie Phillips]: “Barbara, do you spell 'faithful' with one 'L' or two 'Ls'?”

Barbara Cooper [played by Valerie Bertinelli]: “I think it's one 'L'.”

Julie: “Two? That doesn't sound right. Are you sure?”

Schneider: “'Course I'm sure. It's one of the basic rules of grammar. Whenever the 'F' precedes a vowel, it's always two 'Ls', except after 'C', unless it's used in conjunction with a pronoun. Whaddaya think, I forget these things?”

Schneider: “When was that dictionary printed?”

Schneider: “Well, there's your answer! It's outdated. It's an old dictionary.”

Barbara: “What has that got to do with it?”

Schneider: “Well, it's just like automobiles. If they don't change the way words are spelled every couple'a years, how they gonna sell new dictionaries? Come on!”— One Day at a Time, Season 2, Episode 20, “The Butterfields,” original air date Feb. 22, 1977, teleplay by Norman Paul and Jack Elinson, directed by Herbert Kenwith

My Irish father and I didn’t always share the same cultural tastes (Lawrence Welk vs. Bruce Springsteen was a rather big divide), but about one matter we absolutely agreed: Dwayne Schneider, the cocky building custodian of Norman Lear’s 1970s sitcom One Day at a Time, was a hoot and a half whose mere appearance was enough to make us guffaw at will.

Maybe it was a shared Celtic thing among us and the actor who embodied the character. Pat Harrington Jr., who played Schneider throughout the nine-season run of the series, was the son of a song-and-dance man who was part of a circle of Irish-American entertainers that also included Bing Crosby, Pat O’Brien and James Dunn.

Pat Jr. must have inherited at least of his father’s body awareness. At least I’ve come to believe so, thinking again on how, as Schneider, he would swagger into the apartment of single mom Ann Romano and her two daughters, jangling his tool belt and letting his cigarette pack poke out from his T-shirt, practically winking with a Neanderthal come-on.

“The ladies in this building don’t call me ‘super’ for nothing,” Schneider announced early on. The joke was on him, of course—nobody fell for the act, anymore than they would for that thin moustache he felt was so appealing.

I have never gotten around to seeing the recent cable reboot of the series. Nevertheless, I find it hard to believe, as Jen Chaney claimed in a 2017 New York Magazine article, that the new incarnation of Schneider was superior to Harrington’s. Only in a hyper-politically correct time could anyone fail to realize the insecurity (including, in the above quote, the patriarchal need to be an Authority On Everything) behind the painfully thin macho membrane of Schneider.

Harrington’s skill in milking laughs—even as he let you see the anxious character beneath—accounted for why Lear came to regard him as “the comic strength of the show”; why the sitcom’s writers relied on that gift to make the series’ lessons on feminism and sexism sound less overtly preachy; and why the actor won a Golden Glove and Emmy for his performance in the role.

Pat Harrington Jr. died five years ago today at age 86 of Alzheimer’s Disease, leaving more than a few viewers—including a father and son in New Jersey—smiling at his memory.