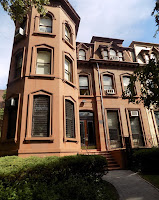 I took the attached photo just after the start of autumn, in 2016. While intending to visit the school where I got my library science degree—Pratt Institute, in its main Brooklyn campus—I decided to walk around and photograph the nearby Clinton Hill Historic District, too, an enclave of some of the best-preserved 19th and early 20th-century architecture in the city. There I encountered St. Joseph’s College, a private liberal arts college.

In the attached photo, Lorenzo Hall, located at 265 Clinton Avenue, houses the administrative offices of the Vice President of Academic Affairs, the Office of Graduate Management Studies and several academic department offices. It and adjacent 269 Clinton Avenue were built around 1878 as single-family residences. In 1948, #269 became a multiple-family building.