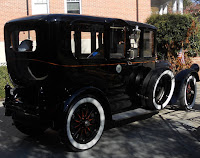 Presidential transitions can be fraught affairs. As I write this, a substantial portion of the country is worried about the mental state of the outgoing President. A century ago, the physical health of the incumbent was the problem (though the extent of his impairment was not commonly known, thanks to concealment on the part of the First Lady).

What you see here symbolizes the power and popularity of Woodrow Wilson at its zenith—and his ultimate tragedy following his disabling stroke in October 1919. I photographed his Pierce-Arrow limousine while visiting the Woodrow Wilson Presidential Library and Museum in Staunton, Va., in the fall of 2010.

This handsome vehicle was waiting for the nation’s 28th President in New York when he returned from negotiating the Treaty of Versailles in 1919. As the first president to join AAA, Wilson loved being driven around (he is not known ever to have driven it himself), so when he left office admirers purchased the 3-ton, 16-ft.-long car on his behalf for $3,000.

This limousine was considered top of the line a century ago. One feature it lacked—understandably, for the time—was heating. On cold days, then, the incapacitated President covered himself inside with a camel-hair blanket.

According to Bill Lohmann’s 2018 article in the Richmond Times-Dispatch, during Wilson’s last miserable year and a half in office, he experienced his few happier moments in this car. At Washington Senators baseball games, he would sit in the car in foul territory so he would not have to go into the stands. (A player with a glove with stand in front of the car, ready to catch any foul balls that might come its way.)